Kyrie Irving not allowed to play with Nets

Brooklyn Nets star Kyrie Irving will not be allowed to practice or play with the team until he is "eligible to be a full participant."

NEW YORK - Kyrie Irving spoke out for the first time about not being allowed to play with the Brooklyn Nets saying he didn't want to lose salary or a chance to compete for a championship.

Irving said it's "what's best for me" by refusing to get the COVID-19 vaccine.

General Manager Sean Marks announced Tuesday that Irving wouldn't be with the team because he isn't eligible to play in home games, where a New York mandate requires professional athletes on one of the city's teams to be vaccinated to practice or play in public venues.

"I am doing what’s best for me. I know the consequences here and if it means that I’m judged and demonized for that, that’s just what it is," Irving said. "That’s the role I play, but I never wanted to give up my passion, my love, my dream just over this mandate."

Irving would have been able to practice with the Nets and play in road games outside New York. The Nets will pay him for those but he is giving up about half of his $35 million salary by missing the home games.

"So what? It’s not about the money," Irving said. "It's not always about the money. It’s about choosing what’s best for you. You think I really want to lose money?"

Irving said he supported people who were and weren't vaccinated and expressed appreciation for doctors. The All-Star guard didn't give any indication that he was against being vaccinated, just that he was deciding not to.

RELATED: Nets' Kyrie Irving won't play with team until he is 'eligible to be a full participant' 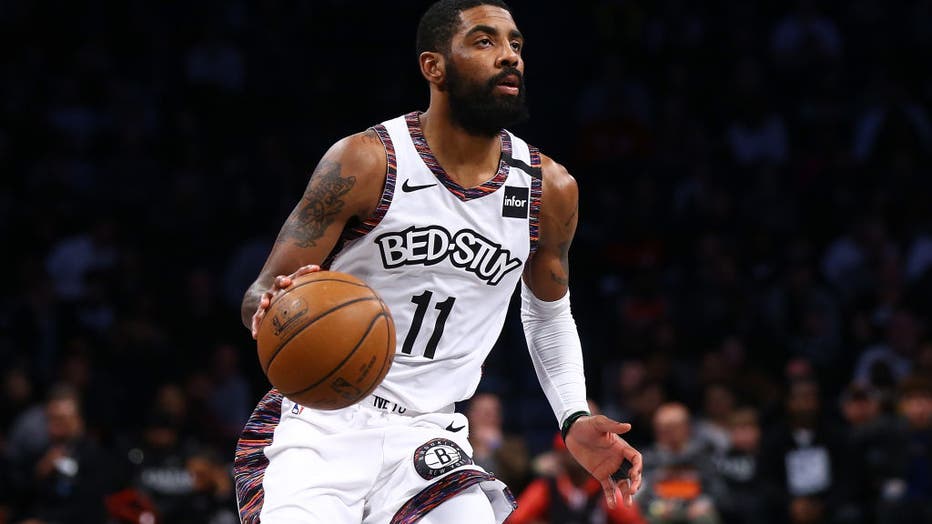 Kyrie Irving #11 of the Brooklyn Nets in action against the Chicago Bulls at Barclays Center on January 31, 2020 in New York City. (Photo by Mike Stobe/Getty Images)

"It’s just about the freedom of what I want to do."

Irving hasn't spoken to reporters since the Nets' media day on Sept. 27, when he appeared via Zoom and asked for privacy when questioned about his vaccination status.

The Nets are championship contenders and Irving said he didn't want to miss the opportunity he has with them. Marks said the team would gladly welcome Irving back under the right circumstances, and Irving made clear he was going to play again.

"No, I’m not retiring and no I’m not going and leaving this game like this," Irving said. "There's still so much more work to do and there still so many other (youngsters) to inspire, because I know they want to be better than me."

"Given the evolving nature of the situation and after deliberate thorough deliberation, we have decided Kyrie Irving will not play or practice with the team until he is eligible to be a full participant," said Marks. "Kyrie has made a personal choice, and we respect his individual right to chose. Currently, the choice restricts is the ability to be a full-time member of the team, and we will not permit any member of our team to participate with part-time availability."

Irving wasn't even eligible to practice with the Nets in New York until Friday, when the city told the team that its training facility was considered a private venue.

Irving then joined the team at an outdoor practice Saturday and worked out with the team Sunday, but didn't play in Brooklyn's exhibition game at Philadelphia on Monday.

He will only lose pay for games he misses at home.

"It is imperative that we continue to build chemistry as a team and remain true to our long-established values of togetherness and sacrifice. Our championship goals for the season have not changed, and to achieve these goals each member of our organization must pull in the same direction. We are excited for the start of the season and look forward to a successful campaign that will make the borough of Brooklyn proud," said Marks.

NBA players are not required to be vaccinated, but they face more testing and restrictions on their ability to be around their teammates. The league had said that players wouldn't be paid for games they miss because they are ineligible to play.

Irving hasn't said he isn't vaccinated, asking for privacy when he spoke via Zoom during the team's media day on Sept. 27. Teammates have said they are supportive of his personal choice.

The Nets open their season against the Milwaukee Bucks on Oct. 19.