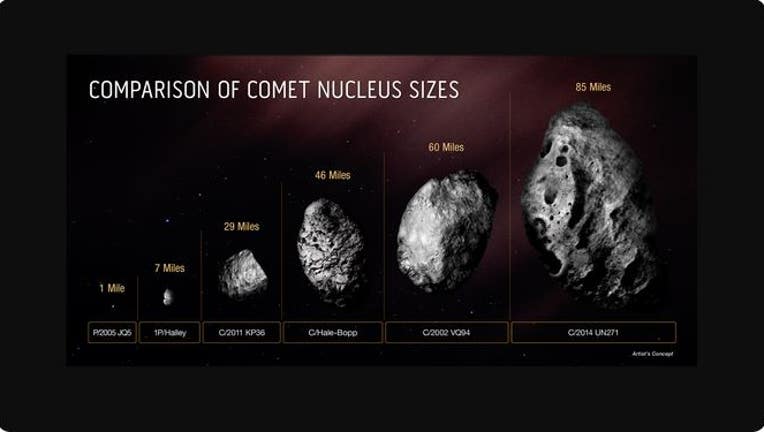 C/2014 UN271 (Bernardinelli-Bernstein) Telescope is barreling towards the heart of our solar system. (NASA)

The largest comet ever spotted by the Hubble Space Telescope is barreling towards the heart of our solar system, but experts say there is no need to worry about this icy behemoth.

C/2014 UN271 (Bernardinelli-Bernstein) was originally spotted by observers in Chile in 2010, but NASA says images from the Hubble Space Telescope have recently helped experts determine its size.

The agency estimates the icy comet’s nucleus is approximately 80 miles across, making it larger than the state of Rhode Island and about 50 times bigger than other comets. 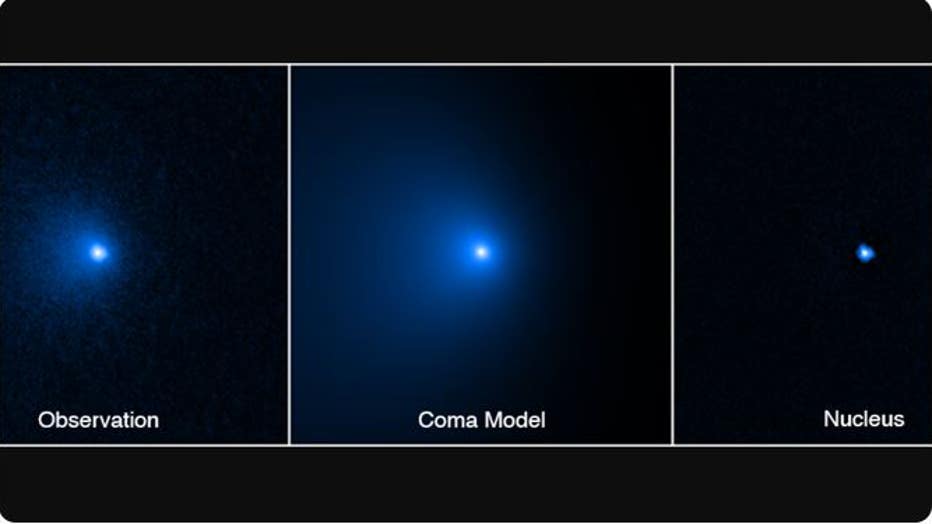 On the left is a photo of the comet taken by the NASA Hubble Space Telescope's Wide Field Camera 3 on January 8, 2022. A model of the coma (middle panel) was obtained by means of fitting the surface brightness profile assembled from the observed imag

Experts say the mass, which is likely made up of dust, rock and ices, will never get closer than about a billion miles from the sun and stay well away from Earth.

"This comet is literally the tip of the iceberg for many thousands of comets that are too faint to see in the more distant parts of the solar system," said David Jewitt, a professor of planetary science and astronomy at the University of California and co-author of the new study in The Astrophysical Journal Letters. "We’ve always suspected this comet had to be big because it is so bright at such a large distance. Now we confirm it is."

The comet is on a 3-million-year-long elliptical orbit, and NASA believes at the current rate of speed of 22,000 mph, the celestial body will make its closest approach to Earth in 2031.

Researchers said they were able to come to their conclusion thanks to the more than 30-year-old Hubble Space Telescope.

The giant telescope was only expected to have a lifespan of about 15 years, but because of service missions in space, NASA says they expect operations to continue into at least the late 2020s.

The Hubble was recently joined by the James Webb Space Telescope, which is more powerful and is expected to give glimpses of the first galaxies and help discover new worlds.