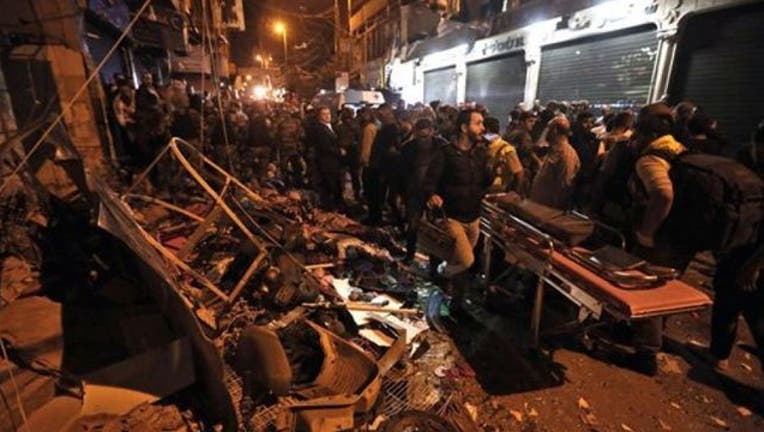 BEIRUT (AP) — A three-year-old Lebanese boy orphaned in the deadly twin suicide blasts that ripped through a southern Shiite neighborhood of Beirut is not likely to remember much of the explosion that killed his parents but the pain and terror of the previous night were etched on his face on Friday.

Haider was sitting in his mother's lap in the front seat of the family's SUV as his father, Hussein Mustafa, was parking the car on Thursday evening near his grandparents' home in the predominantly Shiite neighborhood of Burj al-Barajneh.

At that moment, the first suicide bomber detonated his explosives' vest outside a nearby Shiite mosque. The heavily populated district is part of the southern suburb of Beirut known as Dahyeh were the militant Hezbollah group holds sway.

Haider's parents died instantly while the boy was taken to the Hezbollah-run Rasoul al-Aazam Hospital, where he was being treated for injuries to his right eye and minor burns to his hand.

"His mother was hugging him as she died," said Haider's cousin, Adraa Taleb, who held back tears as she sat next to his hospital bed. The boy was one of seven children being treated at the hospital from the bombings.

Dr. Mahmoud Mansour, the heads the hospital's emergency department, said that 22 bodies, including one of a child, and 87 wounded people were brought to the hospital after the bombings.

"We scrambled to try to treat most of the cases, many of whom were serious," Mansour told The Associated Press at the hospital.

The blasts Thursday night, which included a second suicide bombing minutes later, turned the Shiite district into a nighttime inferno, killing at least 43 people and wounding over 200 others.

The extremist Islamic State group quickly claimed the attack, which shattered a relative calm that has held for more than a year despite the civil war raging next door in Syria.

On Friday, forensic experts dressed in white were working in the area of the blast, which was sealed off by security forces. Residents and shop owners swept up broken glass and other debris from the scene of the attacks.

"They are people without conscience. May they get worse than what happened to us," said Nazmiyeh Tarif, whose cousin Adel Termos, died in the second bombing.

Local media reports said that Termos threw himself at the second suicide bomber after he spotted him approaching crowds gathered outside the mosque targeted by the first bomber.

At the Rasoul al-Aazam Hospital, people turned up Friday to collect the bodies of their loved ones. Some fired into the air with automatic rifles outside the hospital, a typical sign of mourning in Lebanon.

Another child being treated at the hospital, 8-year-old Hussein al-Shami, said he was riding on a motorcycle with his father, Ibrahim, when the explosion knocked them off the bike.

"Even my father started weeping," said the boy, adding that he was sad their motorcycle was badly damaged.

Prime Minister Tammam Salam chaired a security meeting to discuss the bombings, with participants observing a moment of silence for the dead.

"The barbaric crime that took place in Burj al-Barajneh did not target just one region or sect but all of Lebanon from one end to the other," Salam said.

Lebanon, a small Mediterranean country with a history of civil war, has seen deadly spillovers from the Syrian conflict including a wave of bombings and suicide attacks in 2013 and 2014. But Thursday's twin blast was the first since mid-2014 and took people by surprise. It was also one of the deadliest.

Previous explosions have also targeted Shiite populated areas of Lebanon and have been claimed by militants who say it was payback for Hezbollah's participation in the Syrian civil war. The group has been fighting in Syria along with Syrian President Bashar Assad's forces.

There were also reports of a third attacker on Thursday night, who wore an explosives' vest but who was killed in the second blast before he could blow himself up. His body was found with the vest intact.