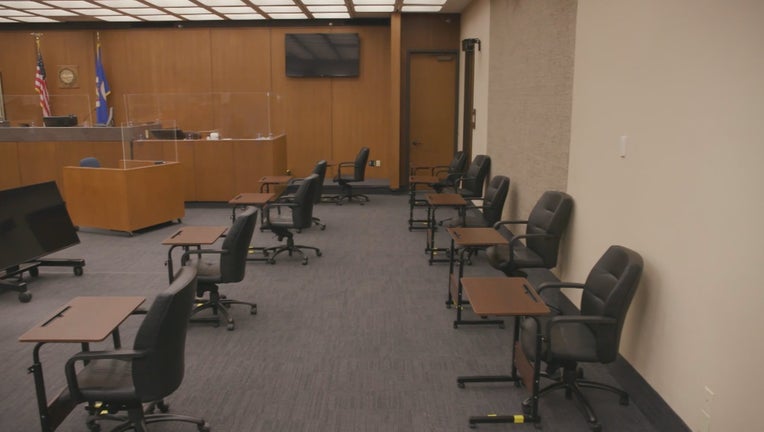 Jurors will sit in the courtroom six feet apart during the Derek Chauvin trial.

MINNEAPOLIS (FOX 9) - Legal experts agree it will be a struggle to find an impartial jury and jurors who are willing to serve on the high-profile, high-stakes Derek Chauvin trial during a pandemic.

Rachel Paulose is a former U.S. attorney in Minnesota. a top Department of Justice prosecutor and is now a law school professor at the University of St. Thomas.

"So I would ask you, how many people do you know who haven’t heard about this case?" said Paulose.

Paulose explained the challenges of finding an impartial jury for Derek Chauvin’s murder trial, given the amount of attention the case has received since George Floyd’s deadly arrest last May.

That means making sure a prospective juror can put aside any biases and opinions they may have to decide the case fairly by following the law and evidence presented in the courtroom.

"If the exposure a person has is because of exposure to a truthful video whose accuracy no one contests, I wouldn't call that bias. I would call that knowledge," said Paulose.

RELATED: Derek Chauvin trial: How will the jury be selected?

To begin weeding out jurors and streamlining the selection process, a 14-page questionnaire was sent out to hundreds of prospective Hennepin County jurors months ago, requesting they not read or intentionally view anything further, or do any subsequent research about the case.

The questionnaire also asked about their opinions about Black Lives Matter, Blue Lives Matter and whether they’ve ever been restrained in a chokehold.

"One of the things that does concern me will be demographics of this jury," said Mary Moriarty, a former Hennepin County chief public defender.

Moriarty worries some of the questions will ultimately eliminate Black or other prospective minority jurors who might be more inclined to express negative opinions about the police. She is also thinking about the impact of COVID-19 and the unprecedented security measures in place that some might find intimidating, even though the court is promising to keep jurors' identities anonymous.

"The concrete barriers, the barbed wire, the fencing. You do have to wonder, what impact that has on the minds of these jurors?" said Moriarty.

On Monday, individual jurors known only by a randomized number will be called to the witness stand, where they’ll be questioned by Judge Peter Cahill and the attorneys.

The court is looking for 16 people, a jury of 12 and four alternates to begin the trial, with both sides allowed to strike people from the pool for various reasons. The jury selection process is currently scheduled to play out over the next three weeks.

"My experience with juries is they do take their responsibility seriously," she said. "They do understand they literally have life and death in their hands, and most view it as an honor to serve their country which is a great thing."

Judge Cahill has announced the jury will be sequestered during deliberations, which means they won’t go home until they reach a verdict. The judge also suggested depending on what happens, he could sequester them for the trial itself, a potentially huge burden on this group of random citizens who’ve been called on to serve.

READ NEXT: Derek Chauvin trial: What you need to know