The Leonid meteor shower is known for fireballs and is expected to light up the sky with up to 15 shooting stars per hour.

LOS ANGELES - The Leonid meteor shower will peak over the weekend into Monday, bringing up to 15 shooting stars per hour.

The Leonids are considered to be “a major shower” that’s active from November 6 to 30, but it is expected to peak on Sunday into Monday, according to NASA. The Leonids are bright meteors that can also be colorful, the agency said.

Its radiant is Constellation Leo, in which astronomers call Leo the “radiant point” of the Leonids, Travel+Leisure reported. But its shooting stars are visible throughout the night sky.

Leonids travel at speeds of 44 miles per second, and “are considered to be some of the fastest meteors out there,” NASA said. 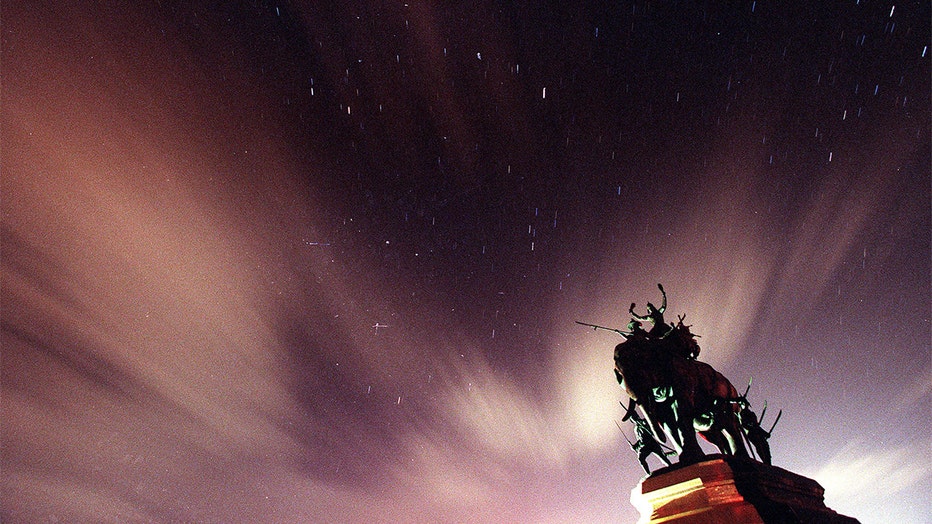 FILE: The Queen Sri Suriyothai statue in Thailand's ancient capital Ayutthaya is silhouetted against the night sky as thousands of people turned out to watch the Leonid meteor shower in the early hours on Nov. 18, 1998. (Photo by PORNCHAI KITTIWONGSA

“Meteors come from leftover comet particles and bits from broken asteroids. When comets come around the sun, the dust they emit gradually spreads into a dusty trail around their orbits. Every year the Earth passes through these debris trails, which allows the bits to collide with our atmosphere where they disintegrate to create fiery and colorful streaks in the sky,” the agency said.

The pieces of space debris that interact with Earth’s atmosphere to create the Leonids originate from comet 55P/Tempel-Tuttle, according to NASA.

Leonids are also known for their fireballs and earthgrazer meteors, the space agency said.

“Fireballs are larger explosions of light and color that can persist longer than an average meteor streak. This is due to the fact that fireballs originate from larger particles of cometary material. Fireballs are also brighter, with magnitudes brighter than -3,” the agency said. “Earthgrazers are meteors that streak close to the horizon and are known for their long and colorful tails.”

The Leonids are best viewed starting around midnight local time, according to NASA.

“Find an area well away from city or street lights. Come prepared for winter temperatures with a sleeping bag, blanket or lawn chair. Orient yourself with your feet towards east, lie flat on your back, and look up, taking in as much of the sky as possible. In less than 30 minutes in the dark, your eyes will adapt and you will begin to see meteors,” the agency said.

“Be patient — the show will last until dawn, so you have plenty of time to catch a glimpse,” NASA said.