Organizers say in celebration of the iconic annual two-weekend festival they've put together some memorable past sets captured in Zilker Park and combined it with unique original programming and more.

The event is partnering and raising awareness for the Austin Parks Foundation, All Together ATX, Equal Justice Initiative, and When We All Vote.

Organizers say while people can't gather at Zilker Park this year they hope ACL Fest 2020 "will provide fans a connection to their greatest memories of ACL’s past, where they were and who they were with, and the sensation of experiencing live music outdoors with thousands of people who share a common sense of pride in community and love of music." 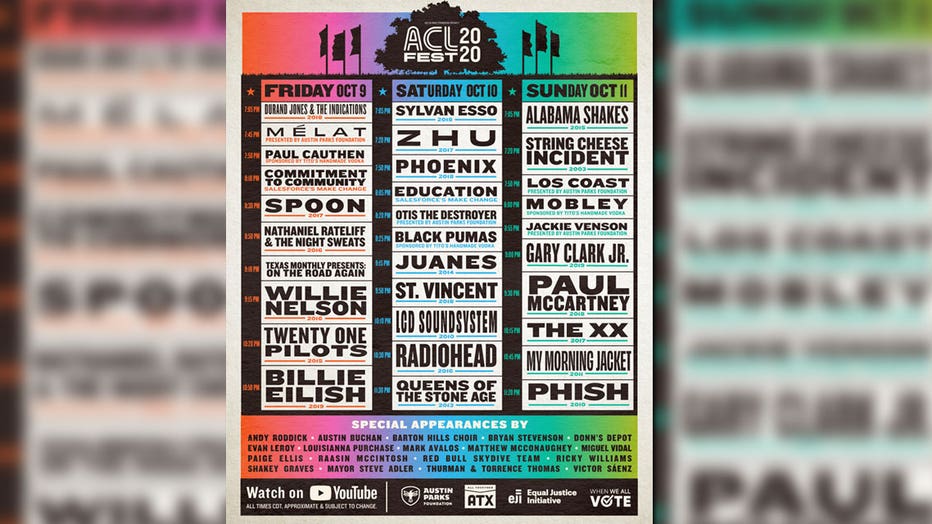 There will be lots of new content as well to watch.

Tito’s Handmade Vodka, which has sponsored ACL Fest since 2002, will host brand new performances from Black Pumas, Paul Cauthen and Mobley, filmed at Tito’s farm in Austin. The company will also match donations to Austin Parks Foundation, up to $10,000, made during ACL Fest 2020.

BBQ favorites Valentina's TexMexBBQ, LeRoy & Lewis, and SLAB BBQ will offer tips and Louisianna Purchase will make an appearance as well as a special performance from the Barton Hills Choir.

Get full details and watch at ACLFestival.com and on their YouTube channel.