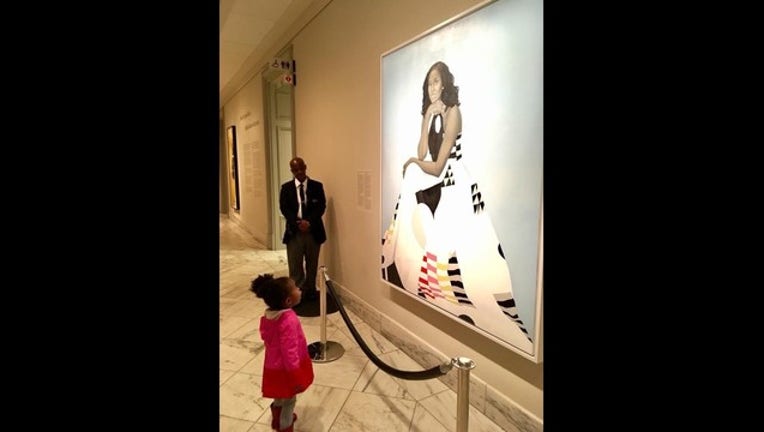 OAKLAND, Calif. (KTVU) - You’ve likely seen the image of a young black girl in a pink and red parka looking up at a portrait of Michelle Obama at the Smithsonian National Portrait Gallery.

That girl is two-year-old Parker Curry and she was so mesmerized that she could hardly break her awestruck stare to take a photo for her mom, according to CNN.

The photo was captured by Ben Hines, who took a trip with his mother to view the portraits. He posted the picture on his Facebook page and it went viral.

“Donna Hines and I made a pilgrimage today and we were delighted to wait in line behind this fellow art lover and hopeful patriot,” Hines wrote in the post.

Amy Sherald, the artist who painted the portrait, posted the photo on her Instagram. “Feeling all the feels. When I look at this picture I think back to my first field trip in elementary school to a museum. I had only seen paintings in encyclopedias up to that point in my life,” she wrote in the post.

Little Parker’s mother saw the image that was spreading throughout social media when friends started sending her screen shots, according to CNN.

"In further discussion with (Parker) yesterday and today, I realized that she believes Michelle Obama is a queen, and she wants to be a queen as well," Curry said, per CNN.