Wild police chase: Suspect gets back in car, drives off after standoff in Lakewood

A bizarre turn of event unfolds in Lakewood as the police chase suspect gets in a standoff with officers, gets back in his car and drives off from the scene.

LOS ANGELES - A suspect is in custody after leading officers on a wild chase through parts of Los Angeles and Orange counties… eventually coming to an hour-long standoff with officers in Lakewood.

The pursuit began around 12:30 p.m. in South Los Angeles and ended around 3:30 p.m. at the intersection of Bloomfield Avenue and Del Amo Boulevard in Lakewood.

The suspect was wanted for armed carjacking.

SkyFOX caught the suspect driving recklessly on surface streets and entering and exiting the freeway often.

The driver made his way from LA to the Commerce area, attempting to dodge traffic on the 5 freeway.

Suspect in custody after wild chase, standoff with officers

From driving on the wrong side of the freeway, to blowing red lights and fighting off a K9... this suspect didn't surrender easily to police.

A police pursuit took a dangerous turn Friday afternoon when the suspect began driving the wrong way on the southbound 5 Freeway.

The suspect then sped down the 5 to Orange County where the vehicle stopped in the middle of the freeway, made a U-turn and drove the wrong way on the shoulder of the freeway.

Traffic on both sides of the 5 freeway near Buena Park came to a stop. The suspect continued to drive on the wrong side of the freeway, nearly missing other vehicles. 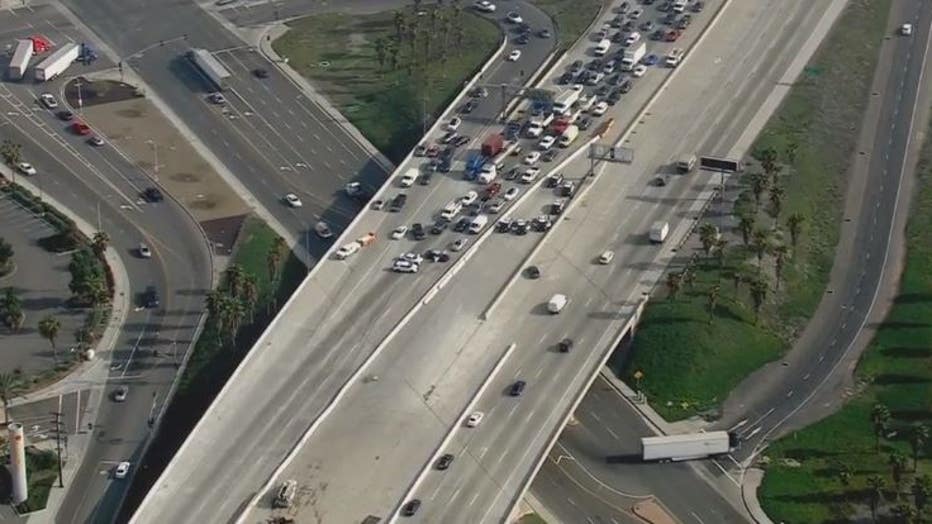 After exiting the 5 freeway, SkyFOX was over the suspect as he drove on the wrong side of Alondra Blvd. in Norwalk.

The pursuit then came to an end as officers closed in on the driver at the intersection of Bloomfield Ave. and Del Amo Blvd. in Lakewood. However, the suspect refused to exit the vehicle and triggered an hour-long standoff with officers.

At one point during the standoff, the suspect opened the car door, exited the vehicle, and made a gesture to police. Authorities fired non-lethal rounds into the car, shattering a rear window, but he still refused to surrender.

The man stepped out of the car about 3:15 p.m. and was hit by at least two bean bag rounds.

A police K9 moved in on the suspect, but the suspect tried to fight off the dog. He then got back into the vehicle and drove off.

Wild Lakewood police chase: Suspect in custody after pursuit, standoff, then driving off from scene

A driver is finally in custody after leading officers on a bizarre series of events, which included a police chase, standoff and then driving off from the standoff scene.

A brief pursuit ensued as the suspect tried to flee from officers again. The suspect was then seen tossing an item out of the vehicle. Police officers quickly conducted a successful PIT maneuver, causing the vehicle's bumper to come off. But again… that didn't stop the driver as he continued to driver away. He drove over a street median and onto the wrong side of the road again. However, another patrol car came in and conducted another successful PIT maneuver.

Officers managed to box in his car to prevent him from driving off. The suspect soon exited the vehicle and was taken into custody.

It is believed he was armed with a box cutter.