Anthony Tira, a tour guide and photographer at Matira Bush Camp, first spotted the young, one-of-a-kind zebra and posted photos of it on the camp’s Facebook page.

“At first I thought it was a zebra that had been captured and painted or marked for purposes of migration. I was confused when I first saw it," Tira told Daily Nation in Kenya. 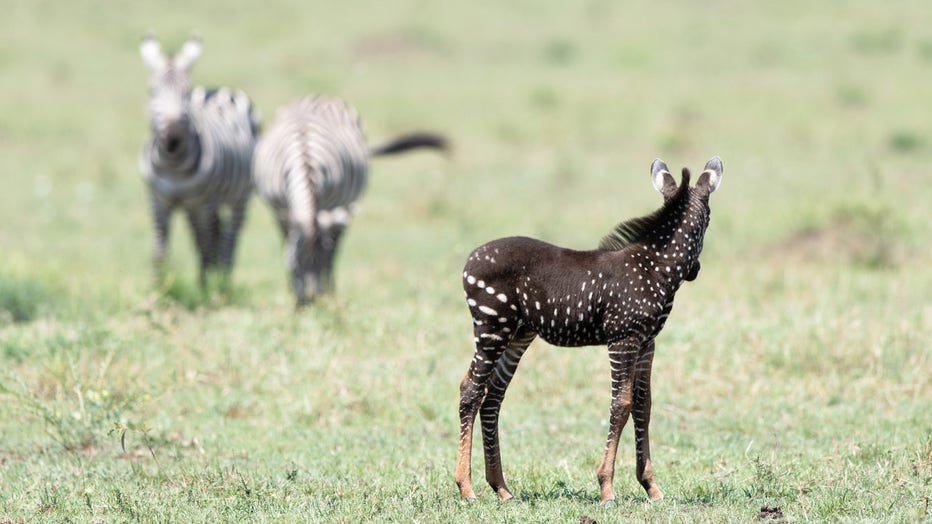 Upon closer examination, Tira said he realized that the zebra actually had a melanin disorder. He told the newspaper that it was hardly a week old and stuck close to a female adult zebra, likely its mother.

The eye-catching zebra was named “Tira,” after the Maasai guide.

Another photographer, Frank Liu, also came across the zebra. He told NatGeo that the zebra “looked like a different species altogether.”

The Daily Nation reported that a stampede occurred in the reserve as tour drivers and photographers rushed to see the rare zebra.

Other foals with a similar condition have been spotted in the Okavango Delta in Botswana. Brenda Larison, a biologist studying the evolution of zebra stripes at the University of California, Los Angeles, told NatGeo that these zebras have a condition called pseudo-melanism. The rare genetic mutation leads to animals displaying an abnormality in their stripe pattern.

Zebras can also experience other color variations, including partial albinism.

Why do zebras have stripes, anyway? Researchers in the field have suggested that stripes may have evolved to deter biting flies. Other commonly proposed theories have included for camouflage and to keep them cool in the sun.

When it comes to the young Tira — a tiger may not be able to change its stripes, but perhaps a zebra can.