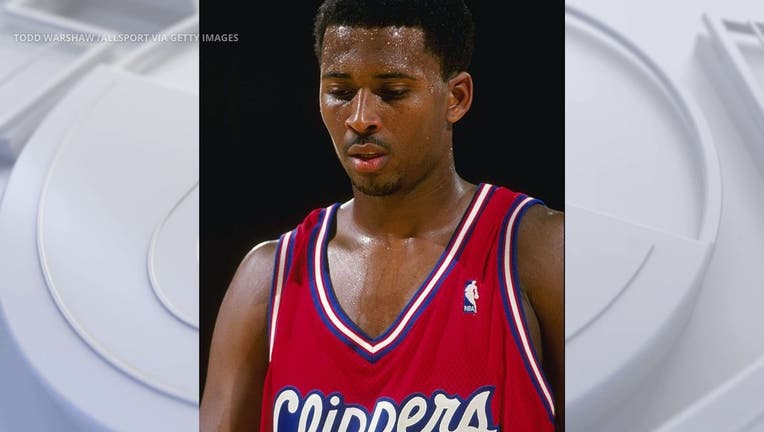 29 Jan 1999: Lorenzen Wright #55 of the Los Angeles Clippers looks down during a game against the Los Angeles Lakers at the Great Western Forum in Inglewood, California. The Lakers defeated the Clippers 107-76. Mandatory Credit: Todd Warshaw /Allspor

MEMPHIS, Tenn. (AP) - A jury on Monday convicted a Tennessee man in the slaying of former NBA player Lorenzen Wright, whose bullet-riddled body was found in a field nearly 12 years ago in his hometown of Memphis.

The 12-person jury deliberated for about two hours before it found Billy Ray Turner guilty of first-degree murder, attempted murder and conspiracy in the death of Wright, a 6-foot, 11-inch center who played 13 seasons in the NBA before he retired after the 2008-2009 season. Shelby County Criminal Court Judge Lee Coffee sentenced Turner, 51, to life in prison for the murder conviction. He will be sentenced for the other charges at a later date.

Coffee called Wright "a sacred son" of Memphis and told his mother, Deborah Marion, that the trial might not bring her closure but to "celebrate the good" about her son.

The slaying is one of the most highly publicized murder cases in Memphis history. Wright’s decomposing body was found riddled with bullet wounds in a swampy field in east Memphis on July 28, 2010. The 34-year-old father of six had been missing for days before his body was discovered.

Turner had already pleaded guilty to possessing a weapon as a convicted felon after he was found with two guns when he was arrested in Wright’s killing in 2017. Turner is serving a 16-year prison sentence on the separate gun charge.

Prosecutors allege Wright’s ex-wife, Sherra Wright, masterminded a plan to kill her ex-husband and recruited Turner and her cousin, Jimmie Martin, to help her.

Turner and Sherra Wright were indicted in December 2017, more than seven years after the killing. Sherra Wright entered a surprise guilty plea to facilitation of murder in July 2019 and was sentenced to 30 years in prison.

Turner is a landscaper who knew Sherra Wright from church and, according to prosecutors, had a secret romantic relationship with her.

At the time of Wright’s slaying, Martin was facing charges of killing his girlfriend, and he said his cousin helped pay part of his legal fees. Martin was convicted and is currently serving prison time, in that case. He has received immunity from prosecution in the Wright case.

Martin testified that Sherra Wright recruited him and Turner to kill Lorenzen Wright. Parts of his testimony were challenged by defense attorney John Keith Perry, who said the information Martin gave to investigators was a farce and full of lies.

Martin testified that he and Turner met with Sherra Wright to plan the killing and went to Lorenzen Wright’s condominium in Atlanta to shoot him, with an understanding that he would get paid.

Armed with handguns, Turner and Martin went to Wright’s condo in Atlanta, entered through a window and found someone sleeping on the couch in the living room — but it was not Lorenzen Wright, Martin testified. Turner and Martin returned home without killing anyone.

Martin told prosecutor Paul Hagerman that he was in Batesville, Mississippi, at the time of the shooting just after midnight on July 19, 2010. Martin said he went to the Memphis field with Sherra Wright some days after the shooting and she essentially confessed.

Lorenzen Wright was visiting Memphis from Atlanta. Sherra Wright said she lured her ex-husband to the field by telling him that she was going to meet someone there to get some money, Martin testified. According to Martin, she said that she and Turner ambushed and chased Lorenzen Wright, who jumped a fence and tried to run away before they shot him in the field.

The jury has heard a gunshot-filled 911 call made by Lorenzen Wright the night of the killing.

Martin also said Turner and Wright got rid of evidence from the shooting scene and he went with Turner to dispose of the weapon by dumping it in a north Mississippi lake. Martin said he told detectives in 2012 where the gun was located. It was later found by FBI divers.

"You can’t really give him much credit," Perry said of Martin.

Prosecutor Paul Hagerman defended Martin’s testimony, saying Martin’s immunity agreement required him to tell the truth and statements given to investigators and prosecutors have been consistent.

"It’s been the same, literally, for 10 years," Hagerman said.

Neither Turner nor Sherra Wright testified during the trial.