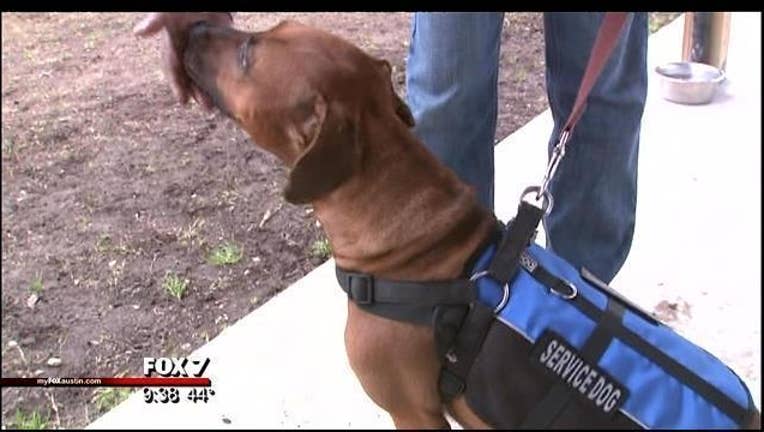 Some veterans in Louisiana are getting some much-needed assistance thanks to a program meant to teach skills to nearby jail inmates.

The St. Tammany Parish Sheriff's Office is expanding a program that not only helps inmates and veterans, it has also saved the lives of some dogs that were set to be euthanized.

"I live alone, and I suffer from depression," said former Army Sgt. Robert Wright, who, like thousands of others, has bouts of melancholy.

The demons spring up, even though it's been four decades since Wright served in the Army. But now, he's got a new weapon in his personal fight. Meet Penny, a rescue dog brought in to rescue a couple of human beings.

"She will guide me up and down the steps - I can't walk very far," Wright said. "She will walk a little, stop, and help me rest."

Penny is the latest pupil in the St Tammany Sheriff's "Big House to Your House" program.

"This is the gold standard. This is what all the other parishes have got to come up to," said program director William Barse.

Dogs like a lab named Dozer, are trained by inmates, as either companion dogs or service dogs for veterans. But it's not just veterans who benefit.

"[To] work with veterans and train people and be a part of something that would help somebody's life - that's just a fulfilling job," said inmate trainer and former Air Force veteran Michael Bland.

The dogs like Dozer do a lot more than just physically help the veterans. There's an emotional bond as well, which many vets find invaluable.

"She'll get into mischief and then suck up to you," said Wright.

Program organizers say with 3,700 veterans in Louisiana alone, the need is great.

"I can't put it in words. So many other veterans have asked me, how can they get a Penny," said Wright.

The Sheriff's Office is now expanding the program to serve even more veterans.

"This is one of those things not costing the taxpayer a penny. If a veteran comes to adopt, the fees are paid by sponsors," said Sheriff Jack Strain.

Wright said he now has a companion and a possible life-saver.

"When I was sick and couldn't respond, she went downstairs and started barking until someone could figure out something was wrong," said Wright.

All thanks to a program that - if all goes well - will give new lives to scores of veterans and inmates and their new best friends.