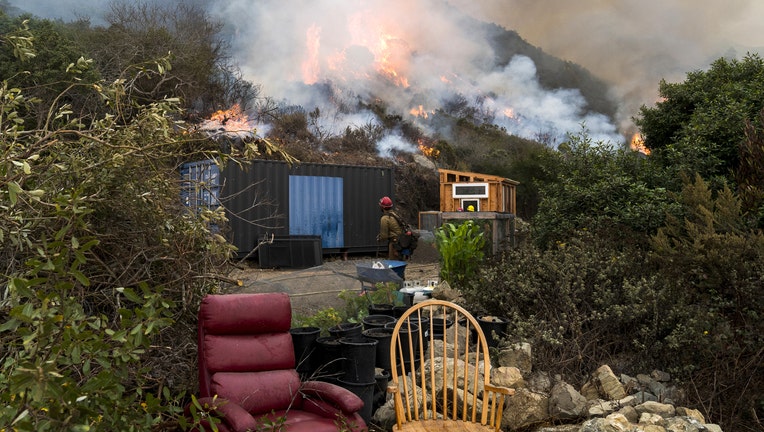 Furniture sits as a firefighter monitors a controlled burn to protect a home on Highway 1 while fighting the Dolan Fire near Big Sur, California, U.S., on Sunday, Sept. 13, 2020. The wildfire burning in the rugged mountains of California's Big Sur co

SALINAS, Calif. - A man who started a 2020 wildfire that killed 12 endangered California condors and seriously injured a firefighter was convicted Thursday of arson and could face up to 24 years in state prison when he is sentenced, prosecutors said.

The blaze erupted on Aug. 18, 2020, on the central coast northwest of Los Angeles. It destroyed 10 homes and an 80-acre condor sanctuary in Big Sur that since 1997 had been used to release captive-bred condors into the wild. There weren’t any condors in the facility at the time but a dozen birds died as the blaze spread across 125,000 acres of forest.

Gomez was arrested after state parks officers spotted the fire and received reports of a man throwing rocks at cars on a highway, authorities said.

Gomez, who was shirtless and sweating, confessed to setting the blaze and was carrying several lighters that matched others found at the spot where the fire ignited, the DA’s office said.

The fire nearly cost the lives of 14 firefighters who were trying to defend their fire station but were overrun by flames and had to deploy emergency shelters, according to a report this year by the Wildland Fire Lessons Learned Center, which promotes firefighter safety. Three were hospitalized with burns and smoke inhalation, including a fire captain who was seriously injured.

Gomez was convicted of 16 felony counts, including arson, throwing rocks at a vehicle and 11 counts of cruelty to animals involving condor deaths.

The California condor is the largest North American land bird, with a wingspan of up to 9 feet (about 2.7 meters).

In the early 1980s, all 22 condors remaining in the wild were trapped and brought into a captive-breeding program that began releasing the giant vultures into Southern California’s Los Padres National Forest in 1992.

That flock has been expanding its range while other condors now occupy parts of California’s Central Coast, Arizona, Utah and Baja California, Mexico. Today there are more than 500 known birds, both in captivity and in the wild.