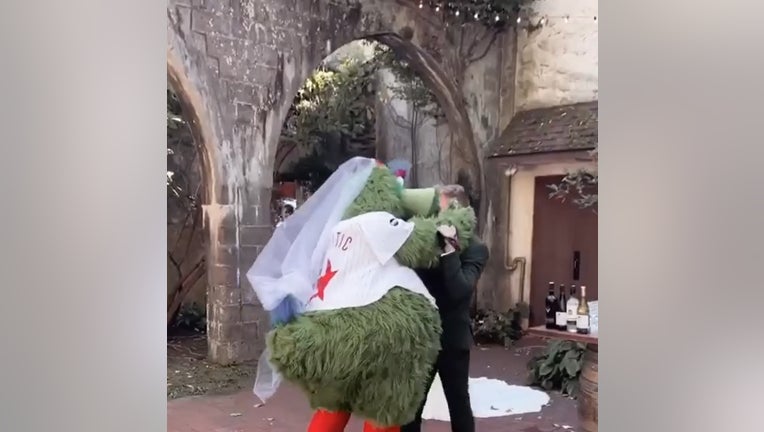 FOX NEWS - That’s not the bride!

One emotional groom was in for quite the surprise when he saw Phillie Phanatic, the furry green mascot of the Philadelphia Phillies baseball team, during his first look with his bride on their wedding day.

On Oct. 7, florist Jena Paige shared the hilarious 40-second clip featuring two of her clients to Facebook, where it has since gone viral with over 5,000 views. In the must-see footage, the unnamed groom, wearing a blindfold, wipes away tears as he prepares to see his wife-to-be on their big day.

One emotional groom was in for quite the surprise when he saw Phillie Phanatic, the furry green mascot of the Philadelphia Phillies baseball team, during his first-look photo shoot with his bride on their wedding day. (Courtesy: Flowers by Jena Paige)

Little did the man realize, but standing before him was not his partner, but instead, the larger-than-life Phillie Phanatic mascot, who appropriately accessorized for the occasion with a veil.

Following instructions from someone in the background, the groom removed the blindfold and was stunned to see the beast – not his bride.

“No way!” the man exclaimed. “Dude, what's up? My man! How are you, buddy? What are you doing here?” he laughed, as bridesmaids giggled in the background.

Moments later, the groom turned around for the real first look, tearing up again as he saw the beaming bride before they embraced.

After the prank was over, the couple reportedly went on to say “I do” without a hitch, and are currently honeymooning in Paris, Paige told ABC News.

It remains unclear at this time whether or not the fuzzy baseball mascot joined them for the romantic getaway.