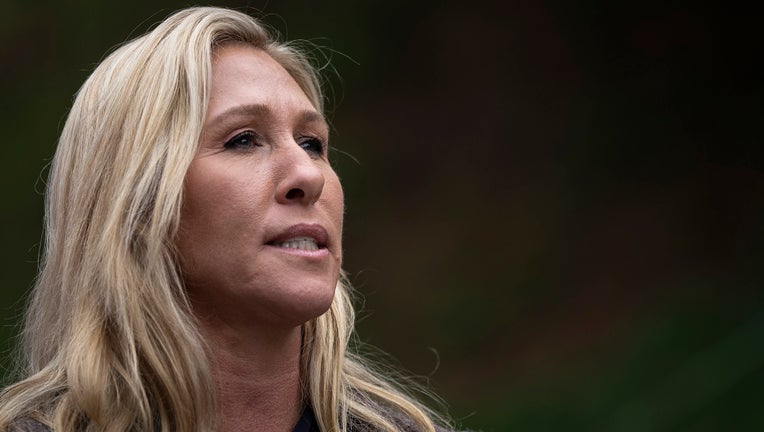 ATLANTA - U.S. Rep. Marjorie Taylor Greene is qualified to run for reelection, Republican Secretary of State Brad Raffensperger ruled on Friday. This after a judge released a similar opinion earlier in the day. The rulings state the group of voters who had challenged her eligibility failed to prove she engaged in insurrection after taking office.

Before reaching his decision, state Administrative Law Judge Charles Beaudrot held a daylong hearing in April that included arguments from lawyers for the voters and for Greene, as well as extensive questioning of Greene herself. He also received extensive briefing from both sides.

State law required Beaudrot to submit his findings to Raffensperger, who had the ultimate decision whether Greene should be removed from the ballot. Late Friday, the secretary of state released his decision adopting Judge Beaudrot's decision.

The challenge to Greene’s eligibility was filed by voters who allege the GOP congresswoman played a significant role in the Jan. 6, 2021, riot that disrupted Congress’ certification of Joe Biden’s presidential election victory. That puts her in violation of a seldom-invoked part of the 14th Amendment having to do with insurrection and makes her ineligible to run for reelection, they argue.

Greene qualified to seek another term in the 14th Congressional District March 7, but a few weeks later, a group called "Free Speech for People" filed a legal challenge with Raffensperger.

The organization filed the 42-page complaint on behalf of five 14th district voters. It alleges that Rep. Greene should be disqualified because of a clause in the 14th Amendment that states, "no person shall be a Senator or Representative in Congress... who, having previously taken an oath, as a member of Congress... to support the Constitution of the United States, shall have engaged in insurrection."

Rep. Marjorie Taylor Greene took the stand to testify in a hearing about whether she would be able to run for re-election to Congress.

The challenge pointed to Rep. Greene's comments leading up to the insurrection at the U.S. Capitol on January 6, 2021, and points to a specific interview on Newsmax the day before where Greene said "this is our 1776 moment."

Greene was not on the Capitol steps herself, but the organization believes she "played an important role" to "help facilitate" the Jan. 6 riot.  At the time of the riot, Greene was in a dark hallway at the Capitol urging people via social media to be safe and remain calm, he said.

Rep. Marjorie Taylor Greene returned to the stand to testify Friday afternoon in a hearing over her eligibility to run for re-election.

The challenge to Greene’s eligibility to run for reelection was filed by five voters who live in her district, and the procedure for such a challenge is outlined in Georgia law.

The law states any voter who’s eligible to vote for a candidate can challenge that candidate’s qualifications by filing a written complaint. The secretary of state then has to request a hearing before an administrative law judge.

Greene filed a lawsuit against Sec. Raffensperger to try to stop the hearing from going forward, but a federal judge ruled against her. Greene has filed an appeal.

The Georgia complaint was filed on the voters’ behalf by Free Speech for People, a national election and campaign finance reform group. The group released a statement following the judge's decision that reads:

"To be sure, the judge agreed with the challengers on the appropriate legal standard for determining whether someone has "engaged" in insurrection, including that "marching orders or instructions to capture a particular objective, or to disrupt or obstruct a particular government proceeding," constitute engagement. And he rejected virtually all of Greene’s legal arguments, e.g., that speech cannot constitute engagement, or that a prior criminal conviction is necessary to trigger disqualification. Nor did he accept her arguments that the January 6, 2021 attack wasn’t an insurrection, or that the insurrectionists are sheltered by an 1872 congressional amnesty for ex-Confederates. Instead, he based his ruling on supposedly insufficient evidence--in large part, credulously accepting her repeated denials or lack of recollection. He discounted both her pre-January announcement of a plan to prevent the peaceful transfer of power and her January 5 signal ("This is our 1776 moment") that the violent vanguard understood as a green light.

Rep. Marjorie Taylor Greene is questioned on comments she made about House Speaker Nancy Pelosi. Greene had called Pelosi a "traitor to our country."

"The purpose of the Insurrectionist Disqualification Clause--in 1866 and today--is to protect the republic not just (or even mainly) from violent foot soldiers, but rather the political leaders who broke their oath to support the Constitution and helped facilitate the insurrection. It’s true that Greene didn’t attack police officers herself, but in the Civil War, Confederate President Jefferson Davis never fired a shot. The case law under the Insurrectionist Disqualification Clause is clear that any voluntary assistance to an insurrection is disqualifying, and the evidence presented in this case established beyond serious question that Greene helped facilitate an assemblage of violent extremists for the purpose, as she admitted on video, of preventing the peaceful transfer of power.

"We urge Secretary Raffensperger to take a fresh look at the evidence presented in the case and reject the judge’s recommendation. Marjorie Taylor Greene helped facilitate the January 6 insurrection, and under the Constitution, she is disqualified from future office."

Following the secretary of state's decision to accept the judge's findings, the group said it would be appealing the decision with the Georgia Supreme Court.

Both an administrative judge and Georgia's secretary of state ruled Marjorie Taylor Greene can seek reelection.

The group filed similar challenges on behalf of voters in Arizona, where a judge on Friday ruled to keep three Republicans on the ballot, and in North Carolina against Republican U.S. Rep. Madison Cawthorn, who spoke at the rally that preceded the riot.

A federal judge last month blocked the challenge against Cawthorn, writing that laws approved by Congress in 1872 and 1898 mean the 14th Amendment section can’t apply to current House members.

The primary election is May 24.