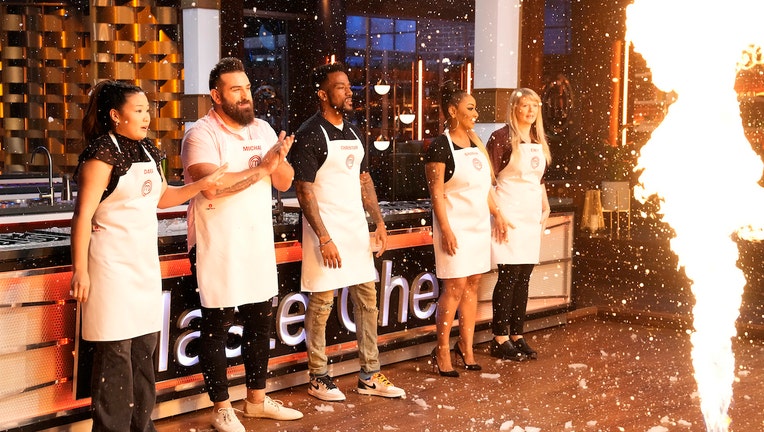 CHICAGO - Welcome back to "MasterChef" recaps! It’s the first half of finale week, as the five remaining chefs first fight to survive the "Semi Finals" two-challenge gauntlet, and the three finalists start their culinary thesis statement in "Finale — Part 1." Miss a week? You can read our recaps and watch On Demand, on FOXNow, on Hulu and on Tubi, FOX’s free streaming service. This television station is owned by the FOX Corporation.

As a certain "Star Trek" theme song would say, it’s been a long road getting from there to here. For this 12th season of "MasterChef," we’ve seen 40 former contestants turn to 20, and eventually to five, as this final week of culinary challenges awaits them. (Since we skipped last week, a little catchup: Derrick and Amanda ended up getting cut after a grueling back-to-back challenge where chefs had to coach each other through their dishes by voice alone, and a restaurant takeover at Spago spelled doom for Willie, who couldn’t keep his team together enough for Wolfgang Puck.)

WATCH FREE ON TUBI: "Anthony Bourdain: A Cook’s Tour" — get the app

But in the semi-finals, the five remaining chefs — Dara, Christian, Emily, Shanika and Michael — enter a "MasterChef" Kitchen filled with fake snow and flaming torches. That’s right; it’s a "fire and ice" challenge, as they’ll have to work through a pair of culinary challenges, the worst contestant in each challenge getting cut straightaway.

"MasterChef: Back to Win" recap: Baked Alaska on my mind 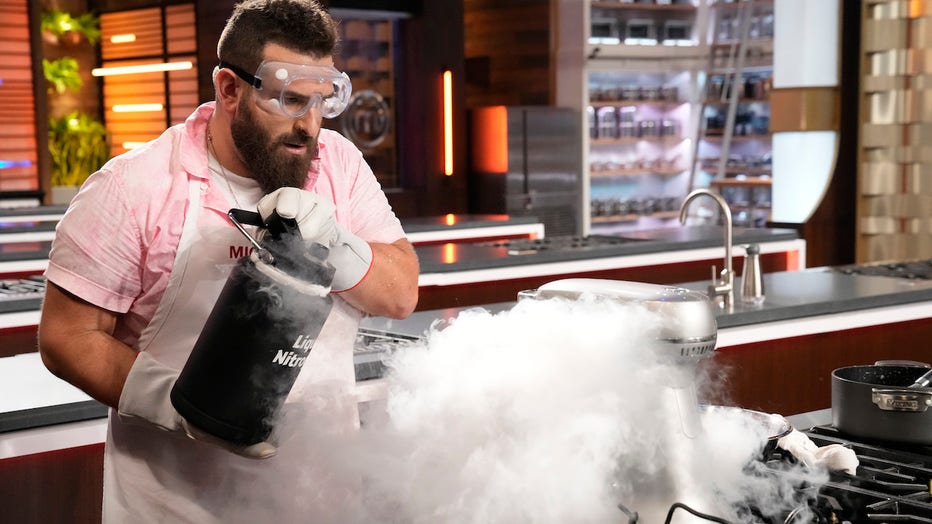 First, the chefs have to make a Baked Alaska, one of the most complicated desserts you can make — a layer of sponge cake, topped with a dome of ice cream, surrounded by a piped, textured meringue that’s then toasted and flambéed. Almost everyone is frazzled, save Dara, who’s usually the most frazzled — but her culinary school experience has readied her for this moment.

Still, it’s not easy, since they have to make their own ice creams and freeze them fast with liquid nitrogen to meet the 60-minute time limit. Everyone’s take has unique flavors: Dara does a peach melba Alaska with a raspberry swirl; Shanika a strawberry lemon basil; Christian a (square!) praline pecan Alaska; Emily goat cheese, cherry and chocolate cake; and Michael with a Bananas Foster Alaska.

After a harried hour of cooking, the Alaskas are up for judging. Dara’s Alaska gets high praise from Gordon Ramsay and others; it’s textbook. Shanika’s looks a little flat, but the flavors are there; Aaron Sanchez, especially loves the aerated meringue. The Southern flair of Christian’s praline pecan Alaska get high marks from Joe Bastianich and Gordon (despite a dry sponge). Emily and Michael run into the most issues; the former’s is a melty mess since her custard didn’t set right, and Michael’s tastes good but suffers from too little meringue. (Make two piping bags’ worth, MIke! Don’t just wipe it over the gaps with a palette knife!) Still, a grainy meringue beats a melted ice cream, which kicks Emily out the door for this first challenge. 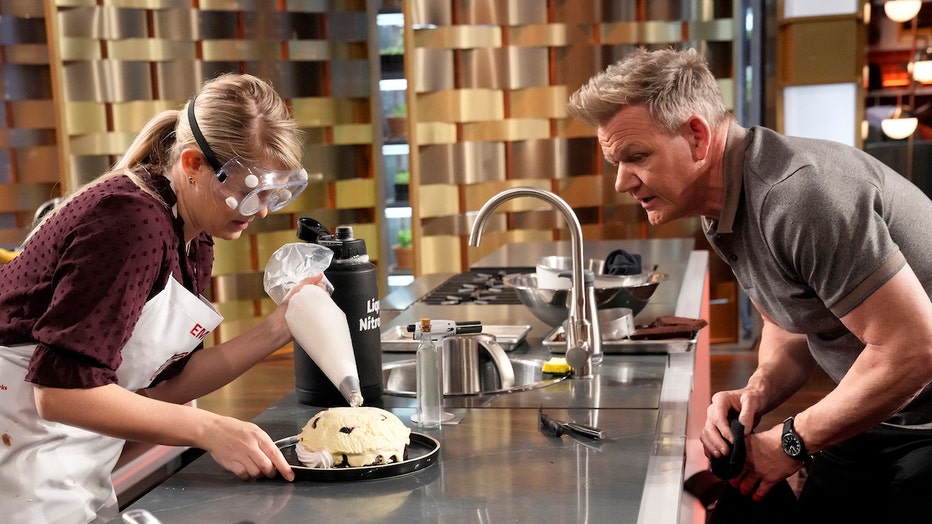 The four remaining chefs then hop right out of the frying pan and into the fire: They must keep up with Gordon (who’s slipped into "something more comfortable": a white chef’s jacket) as they make his signature lobster tortellini with tomato and basil purees. It’s a grueling, fast-paced challenge, with plenty of "yes, chef"s as they struggle to keep up with Chef Ramsay’s lightning speed. Aaron and Joe observe from the sidelines, pointing out when Shanika or Michael fall behind, or when Christian gets flustered at the complicated folding tortellini requires. "What are we doing, a TikTok dance?" he complains in the talking heads.

The critiques come fast and furious: Michael’s shapes aren’t great and there’s too much basil puree, but Joe notes that "it tastes as good as it looks bad," in reference to its shoddy presentation. Shanika’s dish simply looks unfinished, with upside-down tortellini and no lobster claw in the middle of the dish like there should be. Dara’s tortellini, naturally, are textbook, and she’s the only one of the four chefs to put the lemon zest and juice in her filling. Christian’s are a bit of a mess; they’re big and look more like blintzes than tortellini. But the pasta’s beautifully thin and the purees are delicious.

Michael’s mistakes were many, but they pale in comparison to an unfinished dish, meaning that Shanika gets cut right before the finale. (Emily and Shanika get cut one right after the other again!)

"MasterChef: Back to Win" recap: An amuse-bouche for the finale 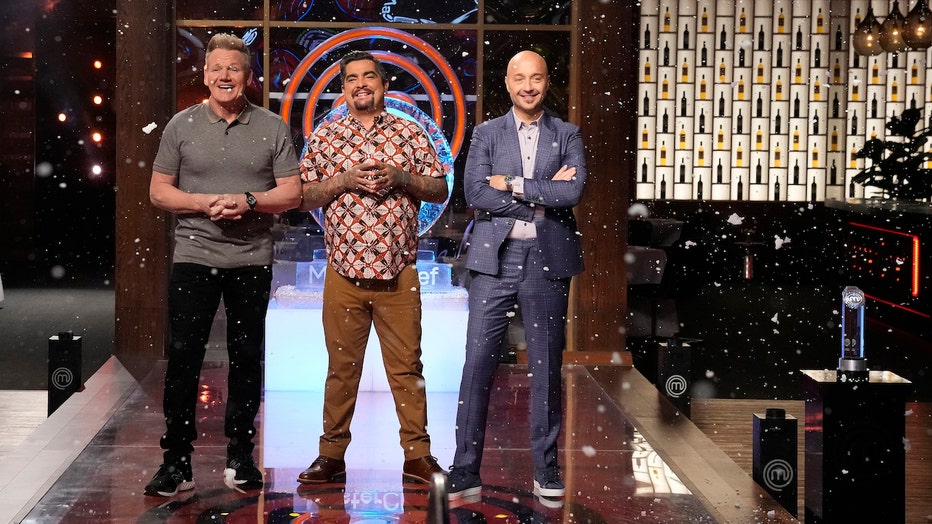 From there, we jump right into "Finale — Part 1," which sees the return of a big cheering crowd, the three circular chef’s stations and our contestant’s family members cheering them on. (We even get some, but not all, of the season’s previous contestants.) Christian’s son Caden is adorable, as is Michael’s cute fiancé with his red turtleneck and chains. Dara’s mom, decked out in a fetching purple ensemble, is "so excited she can’t even talk."

And so the stage is set for their respective three-course meals, all derived from their backgrounds and culinary experiences. Michael is honoring his Texas roots with a bold Tex-Mex meal; Dara is mixing her Asian influence with French culinary traditions she learned in school; and Christian is staying true to his New Orleans roots and the cooking of his late grandmother.

After the first cook (filled with the typical tension-fueled moments of the judges circling the chefs, and Dara having a momentary flash of panic at a broken sauce), the judges get to taste their apps. Michael’s appetizer is cold-smoked trout with a cucumber and pomelo aguachile, with a salsa macha. Gordon says it’s stunning; "the colors pop, it’s got that glamour." The other judges like it too, and justifiably so; it’s a colorful dish. Unfortunately, it lacks a bit of salt, and Michael accidentally left some bloodline on the trout.

Dara’s appetizer is a crispy snapper with miso béarnaise, alongside green and white asparagus and roasted leeks. A miso béarnaise is unheard of, though its results are a bit confounding to Gordon; to him it sits somewhere between a cold béarnaise and warm mayonnaise (he laments the lack of a sabayon). Joe doesn’t care, though, as the technicalities of the sauce pale in comparison to the story she’s telling with her food: "It’s all you, and it’s delicious." 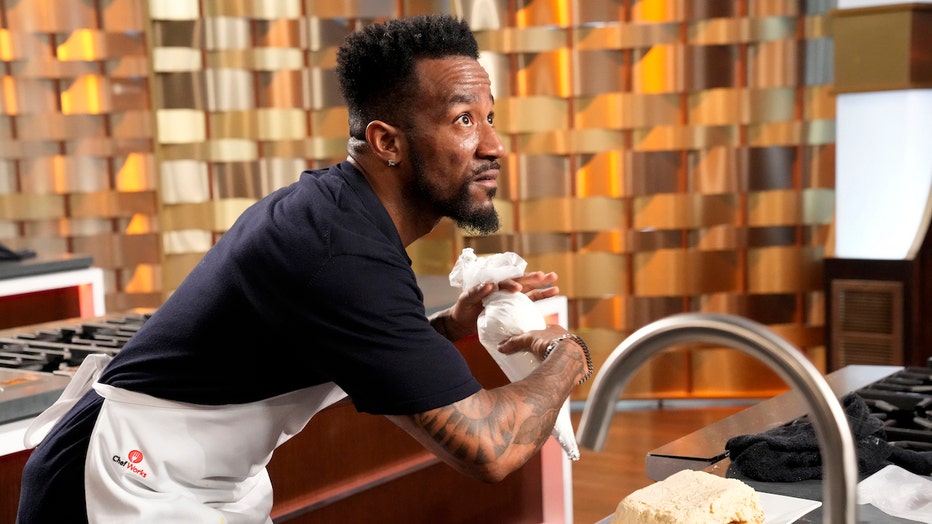 Christian’s appetizer is a fried green tomato with a crawfish salad, remoulade sauce and caviar (!!). "This dish screams you," Gordon gushes, calling these "the most glamorous, poshest green tomatoes in America," especially with that breading. Aaron has one note: the fried green tomato is maybe not elevated enough for this competition. Still, it’s his background on a plate, and they love it.

After that comes the entrée round, but not before another "MasterChef" finale surprise: The return of season 1-6 judge Graham Elliot, He of the Kickin’ Rad Glasses (which Willie, who’s never met a brightly-colored frame he didn’t like, celebrates). Dara and Christian are glad to see him, since he judged their seasons.

The entrée cook proceeds apace: Michael with a chile-rubbed lamb loin, Dara with a short rib and Christian with Cajun-spiced filet mignons. All big, delicate meats that require distinctly different cooking methods and temperatures. Dara’s big dilemma is getting short ribs pinch-tender in time with the pressure cooker; Christian’s is nailing four filet mignons at medium rare in such a high-stakes situation.

Will they all get their meats done correctly and on time? We’ll find out…. next week, as the "MasterChef: Back to Win" finale closes out, showing us which of these returning contestants finally gets the crown for themselves.

About the writer: Clint Worthington is a member of the Chicago Film Critics Association. He is the founder and editor-in-chief of The Spool, and a Senior Staff Writer at Consequence. You can find his other work at Vulture, Nerdist, RogerEbert.com and elsewhere.

Mary Berry’s Absolute Favorites (2014): "Great British Bake-Off" icon Mary Berry cooks up comfort food in her cozy kitchen, casually coaxing curious cooks into concocting Berry’s favorite recipes. (No, we will not apologize for any of that alliteration.) One season, eight episodes.

How to watch "MasterChef"

"MasterChef" airs Wednesdays at 8 p.m. EST on FOX. You can also watch On Demand or stream online via FOXNow. All 12 seasons of the show, including the first six episodes of the current season, are streaming on Hulu. And there’s a whole world of "MasterChef" streaming free on Tubi, including beloved series "MasterChef Junior" and several international editions.