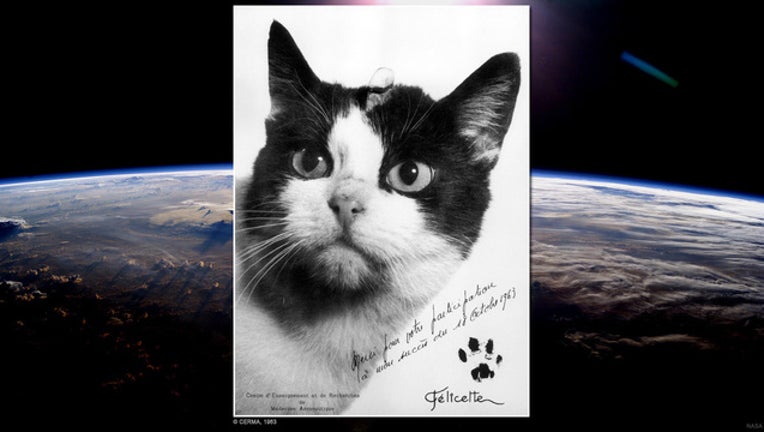 (FOX 13) - Many people know that the first living creature to orbit the Earth was a dog, launched into space by the Soviets all the way back in 1957.  But less well known is that French researchers also sent their own animals into space -- including the first 'cat-stronaut.'

The early days of spaceflight were filled with uncertainty.  Rockets frequently blew up and no one knew how, or even if, people would be able to survive in a weightless environment.  So scientists began sending animals into space to see how they'd survive, though it was a one-way trip for many of them.

For Americans, the animals of choice were monkeys.  'Albert,' a rhesus monkey, was the first animal in space when he was launched from the White Sands Missile Range on a suborbital flight.  It would be three more years before a monkey would survive one of these flights, though.

Meanwhile, the Soviets used a variety of mice, rats, and rabbits for their initial tests before settling on dogs. They launched a pair of canines on a suborbital mission in 1951, and safely recovered both.  Eventually, the Moscow stray dog Laika rode into orbit aboard Sputnik 2, but she died as expected when she ran out of air.

Once humans made it into space in 1961, animals were relegated to lower profile biomedical missions.  The U.S. and Soviet Union proceeded to race to the moon, but other countries made strides into space, too.

France was among the nations also building their own rockets.  They chose cats as the animals for their spaceflight trials -- a team of around 14 felines was trained to fly aboard a Veronique AGI rocket for biological research.

The giant leap for cat-kind came on October 18, 1963.  Just after 8 a.m., the rocket blasted off from Algeria carrying Félicette, a black and white female cat who had been found on the streets of Paris.

Félicette's suborbital flight lasted 15 minutes and reached an altitude of 97 miles.  She was recovered safely after the capsule parachuted back to Earth making her the first and only known cat in space.

PICTURED HERE: A photo card handed out to scientists and engineers as a memento of the flight, complete with paw-print. The text translates to: "Thank you for your role in my success, October 18, 1963."  (Photo © CERMA, 1963)