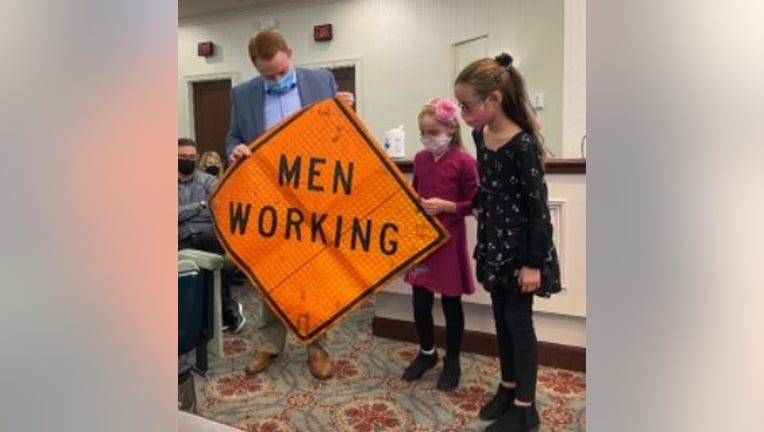 CARMEL, Ind. - Leave it to sisters Blair Babione, 11, and Brienne Babione, 9, to remind people that women work in construction, too.

The siblings spotted a "men working" sign posted near a construction site a few weeks ago in Carmel, Indiana. That prompted them, along with their mother, to write a letter to town leaders asking why the sign was posted when plenty of women also work in the field.

City spokesperson Dan McFeely said the city didn’t own the sign, pointing out that the city adopted gender-neutral signs years ago along with the state and federal governments. He said the sign came from a contractor hired to work on the project.

Regardless, the girls’ action prompted city leaders to pass a resolution banning the use of gender-biased construction signage within the city limits.

"‘Men Working’ or ‘Men At Work’ signage directly conflicts with the notion that all those who live and work in the City of Carmel, regardless of gender, should be encouraged to pursue the vocations, interests, and hobbies of their choosing," the resolution read.

"It shows me not only do they care about the rights of women to work in the construction industry, it was also a wonderful display of getting involved in your local government," McFeely said of the sisters to FOX Television Stations Monday.

He said the city’s female first responders attended the council meeting in support of the resolution.

"We hope, by us calling attention to this matter, that we inspire others to know that their voices, big or small, can make an impact by getting involved in civic duty, learning how government and advocacy works and doing research on a cause you are called to before taking action," the girls’ mother, Leslie, said in an email to IndyStar.

McFeely said the city actually had a leftover "men working" sign in the city’s storage from years ago. After dusting it off, the city gave the sign to the sisters.

"They were told they can do what they wanted to do with it," he said. "They could either keep it as a souvenir. They could tear it up. They could burn it. Whatever they want to do."