Seventeen people were injured and 10 people were arrested in a shooting that happened shortly after 11 p.m. Friday near Water and Juneau in Milwaukee's Water Street Bar District.

MILWAUKEE - Milwaukee police said 17 people were injured, and 10 people were arrested in a shooting near Water and Juneau late Friday, May 13. The shooting happened a couple of hours after the Milwaukee Bucks game – not far from Fiserv Forum and the Deer District.

It happened shortly after 11 p.m. All victims are between the ages of 15 and 47. They are all expected to survive.

The shooting was part of a violent weekend in Milwaukee – which prompted the city to put into place a curfew in the Water Street bar district.

Police said nine guns were recovered in the shootings. The investigation is ongoing, and Milwaukee police are seeking unknown suspects.

There were ultimately three separate shooting incidents downtown in a matter of two hours Friday night.

The shooting at Water and Juneau came not long after three people were injured in a shooting near the Deer District around 9:15 p.m.

A 20-year-old Milwaukee man was also injured in a separate shooting near Water and Juneau around 10:30 p.m. Police are seeking an unknown suspect in that case.

"This is unacceptable, and the state legislature needs to do more. We need to close the loopholes on all of these guns that are wreaking havoc on our streets," said State Sen. Latoya Johnson (D-Milwaukee in a news conference Saturday afternoon. 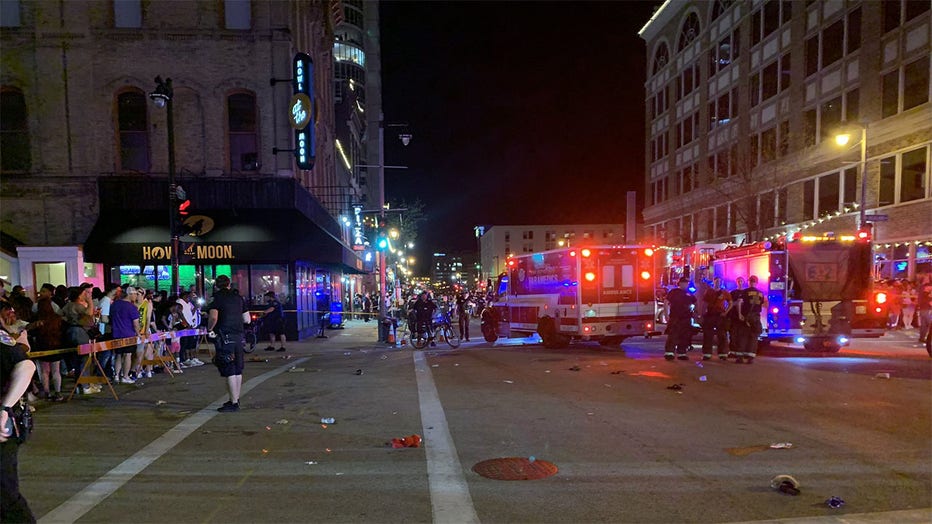 Scene of reported shooting near Deer District after Bucks game

"This is a clear case of ‘we have to do more.’ We have to make sure that we are protecting our citizens – those individuals who call Milwaukee home. And it's long overdue," she continued.

Anyone with information related to these cases is asked to call the Milwaukee Police Department at 414-935-7360; to remain anonymous, call Crime Stoppers at 414-224-TIPS or use the P3 tips app.

"My heart hurts to hear of another instance of gun violence in our community. How much more are our residents supposed to take? Enough is enough.

"I thank our first responders and police officers for getting to the scene. I am so relieved that all the victims are expected to survive.

"It is abundantly clear that we need gun violence reforms, so that these deadly weapons don’t continue falling in the wrong hands. I stand in strong support of gun safety reforms and investments in Milwaukee that promote safety, peace, and healing."

Last night as National Police Memorial Week was being observed in our nation's capital, we sadly saw the realization of the challenges our officers face every day right here in downtown Milwaukee when a mass shooting injured dozens of people.

The Milwaukee Police Association thanks our Police Officers, Detectives and Forensic Investigators who are working tirelessly to investigate the mass shooting. The MPA thanks those officers who helped people to safety, protected lives, and secured the scene as multiple shooters were still active. We are thinking of the police and their families today, and we offer our sincere wish that all who were injured during this time of unprecedented violence in our city, make a full recovery.

As we honor our brothers and sisters in law enforcement who gave their lives for their community, let us not forget that our officers put their lives on the line every day for the city of Milwaukee. We honor them, along with those who made the ultimate sacrifice.