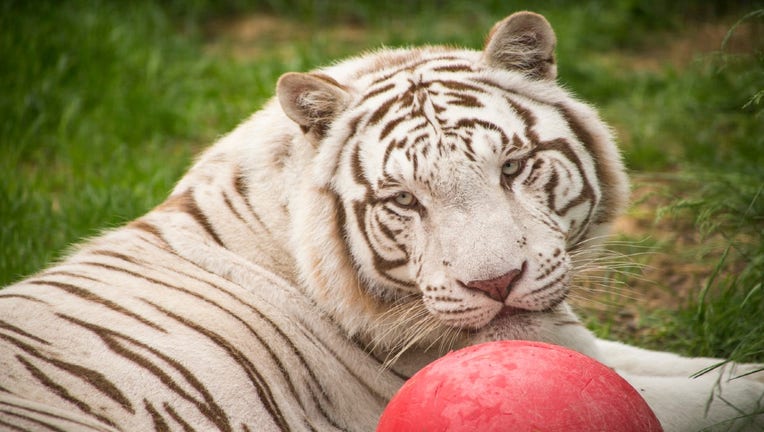 SANDSTONE, Minn. (FOX 9) - The Wildcat Sanctuary in Sandstone, Minnesota has accepted several big cats including tigers and lions seized last week by the U.S. Department of Justice from the owners of an animal park in Oklahoma featured in Netflix’s "Tiger King."

The Wildcat Sanctuary says because of the ongoing federal investigation, it cannot disclose how many of the big cats it has received from Tiger King Park. But, sanctuary founder Tammy Thies told FOX 9 in an email exchange this is not an unusual acquisition for them.

"We have worked with the U.S. Department of Agriculture, U.S. Fish and Wildlife and other state and federal authorities in the past on cases," said Thies. "These cats will join others in our Witness Protection program until final disposition is determined by the court."

The U.S. Justice Department says federal agents seized 68 protected lions, tigers, lion-tiger hybrids, and a jaguar from Jeffrey and Lauren Lowe on Thursday, May 20. Three inspections of Tiger King Park since December by the USDA resulted in citations against the Lowes for failing to provide the animals with adequate or timely veterinary care, appropriate nutrition, and shelter. The Justice Department says the Lowes were found in contempt of violating a court order to employ a qualified veterinarian.

A search warrant affidavit filed in federal court of Oklahoma said the 68 big cats and jaguar "continue to be harmed and harassed and, therefore, unlawfully taken in violation of the Endangered Species Act."

The affidavit revealed at least three big cats under the age of one had died from malnutrition since the end of September, 2020.  It also described how USDA veterinarians during a May 6 inspection found conditions at Tiger King Park had declined since their inspection in February.

"There is probably case to believe the animals are not consistently being provided a sufficient quantity of food free from contamination," the affidavit reported.

The Wildcat Sanctuary said they are trained and certified in caring for the Tiger King Park animals they received.

"We are accredited by the Global Federation of Animal Sanctuaries who sets the highest standards of care and safety," said Thies. "We are also licensed by the USDA. People can also join our Facebook page to see live posts on how the cats live and are cared for at the sanctuary, though Witness Protection cats are not featured given they are evidence in an ongoing case," she said.

The Wildcat Sanctuary already cares for about 100 wildcats according to spokeswoman Susan Bass.  Over the years, the sanctuary has taken in this many big cats at one time.  Thies says they only accept the number of cats that they have habitat space for.

The cost for caring for the new big cats will be absorbed by the Wildcat Sanctuary.

"Yes, we are accepting general donations for their and other residents’ care," said Thies.