PHOENIX - Two Arizona sisters who worked in the medical field were supposed to return from Europe in February but never did. Officials have now confirmed the Phoenix-area sisters died by assisted suicide in Switzerland.

On March 17, we first reported on Lila Ammouri and Susan Frazier, who traveled to Europe via a direct flight on Feb. 5 from Chicago to Zurich. The sisters were supposed to fly back on Feb. 13 and return to work on Feb. 15. Both failed to do so, which left their friends worried.

"They were in a very good position of their lives in terms of careers and what they have reached and accomplished, and there is no reason for them to not be returning on their own volition," said Dr. David Biglari.

Ammouri and Frazier's deaths were later confirmed by Jill Barwig with the Bureau of Consular Affairs of the United States Department of State.

"We can confirm the death of two U.S. citizens in Switzerland. Out of respect for the privacy of the family, we have no further comment at this time," Barwig wrote, in a statement.

On March 23, we received word from Swiss officials that Ammouri and Frazier died via assisted suicide.

"They both used the services of an assisted suicide organization and committed suicide," read a statement released by Michael Lutz, a spokesperson for the Public Prosecutor's Office for the Canton of Basel-Landschaft.

"In the specific case, the on-site clarifications by the authorities revealed that the assisted suicide had taken place within the legal framework, so that there was no criminal relevance. For this reason, the Basel-Landschaft public prosecutor's office did not open a criminal investigation," Lutz wrote.

In a 2011 article by the BBC, it was noted that people from countries outside Switzerland often head to Switzerland for assisted suicide because such practices are banned in their countries. It is noted in a 2021 article by Swissinfo.ch that under Swiss law, assisted suicide is tolerated when patients commit the act themselves, and helpers have no vested interest in their death.

In initial reports of the sisters' disappearances, friends and colleagues expressed their suspicion that foul play was involved.

Dr. Biglari, a longtime friend and colleague of the two, said no one heard from the two since an email was sent from a work laptop on Feb. 9. Then, they got a text message a day later that they strongly feel is actually from someone else pretending to be them.

"Some of the text communications they had, we are certain they were not from them," said Dr. Biglari. "They were most likely fabricated with someone else."

Friends didn’t waste any time contacting local and international authorities, as well as the embassy, but Dr. Biglari, at the time, said more needed to be done.

"We have reason to believe that they are not really taking it very seriously," said Dr. Biglari. "We want attention from our authorities, and perhaps involving the local authorities in Zurich. There has to be trails, phone trails of where they were staying."

The sisters, both of whom work in the medical field, were supposed to return from Europe in February, but never did. Friends are now hoping to find some answers. FOX 10's Stephanie Bennett reports. 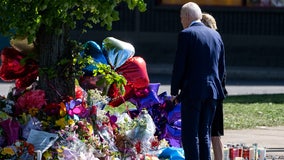 President Joe Biden and first lady Jill Biden are visiting Buffalo Tuesday. Their first stop was a makeshift memorial outside the supermarket where 10 people were shot and killed.