FRESNO COUNTY, Calif. - More than 200 people were airlifted to safety early Sunday after a fast-moving wildfire trapped them in a popular camping area in California’s Sierra National Forest.

A photo tweeted by the National Guard showed at least 20 evacuees crammed inside one helicopter, crouched on the floor clutching their belongings. In another photo taken on the ground from the cockpit, the densely wooded hills surrounding the aircraft were in flames.

The Creek Fire started Friday and by Saturday afternoon exploded to 56 square miles, jumped the San Joaquin River and cut off the only road into the Mammoth Pool Campground, national forest spokesman Dan Tune said. At least 2,000 structures were threatened.

Over 45,000 acres have been burned as of Sunday afternoon.

Tune said the campers were told to shelter in place until fire crews, aided by water-dropping aircraft, could gain access to the site. 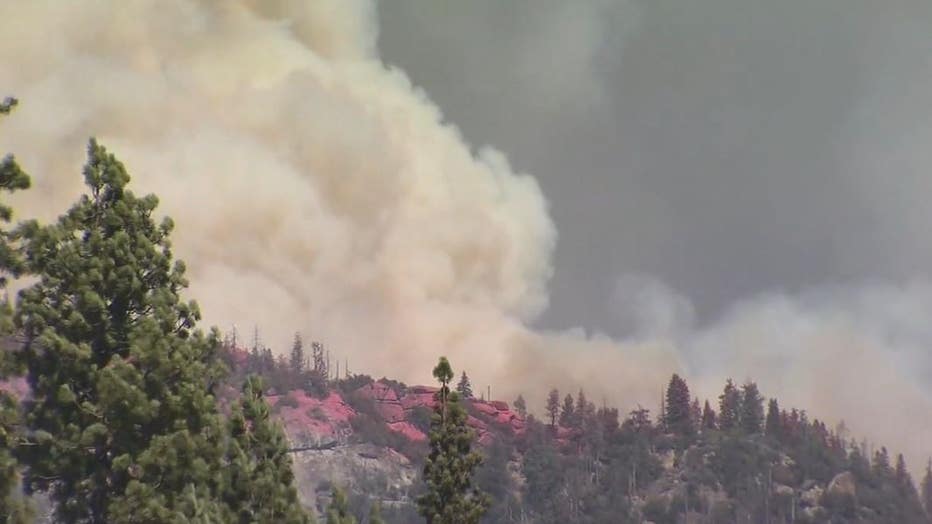 Shaver Lake, which is 5 miles northeast of Fresno, is surrounded by thick pine forests and is a popular destination for boating and fishing. Bone-dry conditions and the hot weather fueled the flames.

“Once the fire gets going, it creates its own weather, adding wind to increase the spread,” Tune said.

The Creek Fire is one of several fires in the state that broke out amid record-breaking, triple-digit temperatures that baked the state.

Juliana Park recorded video of flames on both sides of her car as she and others fled down a mountain road.

“A backpacking trip cut short by unforeseen thunder, ash rain, and having to drive through literal fire to evacuate #SierraNationalForest in time,” Park tweeted. “Grateful to the SNF ranger who led us down... wish we got her name.”

Lindsey Abbott and her family were guided to safety by a stranger they followed down from their campsite near Whisky Falls.

Ashley Wagner was among those rescued, along with two relatives and a friend. They were trapped in Logan’s Meadow behind Wagner’s Store, a 63-year-old business run by her aunt that was destroyed.