Cassie Walton, a mom of two from Oklahoma, went viral on TikTok for a video showing her 5-year-old son practicing an active shooter drill. She discussed the video and reaction to it with FOX Television Stations.

MCALESTER, Okla. - For many families, back-to-school season can be a mix of excitement and jitters as children prepare for the year ahead with new teachers, classrooms, and the promise of learning. But for one mother in Oklahoma, it’s also a reminder of the ongoing anxiety and fear that many U.S. parents feel about the potential for tragedy.

Cassie Walton, a mom of two from McAlester, Oklahoma, recently went viral on TikTok for a video showing her 5-year-old son, Weston, practicing an active shooter drill at their home in preparation for the upcoming school year.

In the video, Cassie, 23, can be heard asking Weston to show her how to use his Spider-Man backpack with a bulletproof backpack insert. She tells Weston firmly that he must stay "absolutely silent" in the event that a shooter reaches his classroom.

Cassie tells him to run "as far away from the school" as possible in the event that he’s able to get out of the building.

"Mom will find you," she can be heard telling him.

After the shooting at an elementary school in Uvalde, Texas, in which 19 children and two teachers were killed, Cassie said her son had seen some news coverage and came to her with questions. This also inspired them to practice the drill at home due to Weston starting kindergarten.

"I explained it in age-appropriate words for a 5-year-old, and then I just took the drills that he does in school, and I added a bulletproof backpack to that for some extra security," Cassie told FOX Television Stations.

RELATED: North Carolina school district planning to put AR-15 in every school in the event of another school shooting

Cassie’s video, which was shared on her TikTok account @TheWaltonFamily1, has been viewed over 7.7 million times since being posted earlier this month. Cassie, who also has a 2-year-old son named Huston, said she was inspired to purchase the backpack insert after seeing another mom’s TikTok with a similar product.

Weston, who is "loving" kindergarten so far, is not scared of the drill nor scared to go to school, Cassie said. The TikTok video captured their second time doing the drill.

"He is very smart, and he processes information very well and he absorbs information like a sponge," his mother said. "So he remembered everything that we did from the first time and we've only had to do it twice so far and he seems comfortable with it." 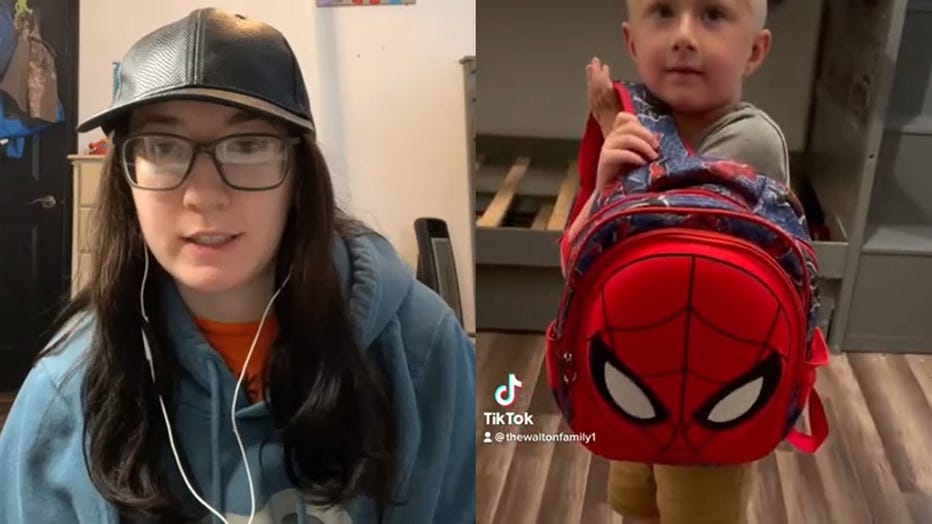 Cassie Walton, a mom of two from Oklahoma, is pictured in an image, alongside a screenshot from her viral TikTok post showing her son practicing an active shooter drill. (Credit: FOX Television Stations / Cassie Walton via Storyful)

There are thousands of comments on her TikTok video. Many praised her for taking extra steps to protect her son, while lamenting about the realities parents face and fears they have about sending kids to school each day. Some even noted this as a reason they’re choosing to homeschool.

"This broke my heart. I just bought my son this exact backpack and this is one of my greatest worries as a mom," one person wrote.

"As a mum of 4 from the UK, I cannot imagine ever having to teach my babies how to do this. I’m so sorry this is your reality," another commented.

Cassie said she has received some negative comments, because "nobody can agree on anything."

"For the majority, it’s been positive because my video wasn’t saying anything bad towards guns or schools, it was all about the kids," Cassie told FOX Television Stations.

"I feel like no matter what part of the world you’re in, or what language you speak, what religion you are, we all have one thing in common, and it’s that we would do anything for our kids," she added.

While there is no way to completely shield your child from pain, fear, and grief, there are ways that parents can help kids cope and process disturbing events, like school shootings in the news headlines, in the healthiest way possible.

Dr. Harold Koplewicz, child psychiatrist and medical director of the Child Mind Institute, suggests allowing and encouraging them to express their feelings. Koplewicz is the founding president of the institute, which offers clinical care, research, and education for families and children struggling with mental health and learning disorders.

When something happens in the news, such as the Uvalde, Texas, school shooting, it can receive wide news coverage and be difficult to avoid. Koplewicz says it’s best for parents to be the one who tells their child what happened, instead of them hearing it from another child or seeing a news report.

Another suggestion is inviting them to share what they’ve heard and how they feel and take cues from children.

"Give her ample opportunity to ask questions. You want to be prepared to answer (but not prompt) questions about upsetting details. Your goal is to avoid encouraging frightening fantasies," Koplewicz writes.

As a parent, remaining calm — instead of speaking about a traumatic event in a highly emotional way — is important.

"If, on the other hand, you remain calm, he is likely to grasp what’s important: that tragic events can upset our lives, even deeply, but we can learn from bad experiences and work together to grow stronger," Koplewicz explains.

Another key point Koplewicz shares is that these events are rare, so it’s important to reassure children about how unusual this kind of event is and the safety measures schools take to prevent such tragedies. Sharing how these situations are investigated carefully to identify causes and help prevent them from happening can also help kids build confidence to know that we can learn from negative experiences, Koplewicz adds.

Another topic of advice, which can be tricky for some parents, is being "developmentally appropriate." To Koplewicz, this means not volunteering too much information that might overwhelm them. Instead, try to answer their questions as honestly and clearly as possible.

"It’s okay if you can’t answer everything; being available to your child is what matters," Koplewic writes. "Difficult conversations like this aren’t over in one session; expect to return to the topic as many times as your child needs to come to terms with this experience."

RELATED: Resources for helping families cope after a mass shooting