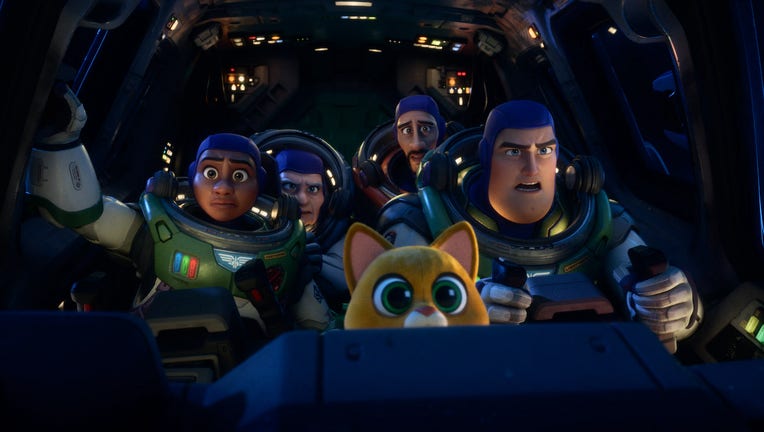 ALISHA? – In Disney and Pixar’s "Lightyear," Buzz (voice of Chris Evans) returns to the planet he’s been marooned on for decades after a monumental test flight. But things have changed while he was away. When he runs into Izzy Hawthorne (voice of Kek

ORLANDO - "Lightyear," the latest film from the animation powerhouses at Pixar, must have seemed like a sure thing to Disney executives. It’s got Chris Evans, still riding high off his uber-buzzy (no pun intended) success in the Marvel Cinematic Universe. It’s a prequel of sorts to a beloved Pixar title, something the studio has proven can work thanks to 2013’s well-received "Monsters University." And the movie in question isn’t a Pixar title, it’s the Pixar title: "Toy Story," a landmark event for the studio and the world of animation.

That confidence seems to have been warranted. "Lightyear" isn’t quite Pixar at its most emotionally potent, and the pacing veers a little too close to the big-budget action formula at times, but there’s enough emotional potency and clever plotting to make "Lightyear" a solid addition to Pixar’s ever-growing roster of family flicks.

About "Lightyear": To the origin story — and beyond 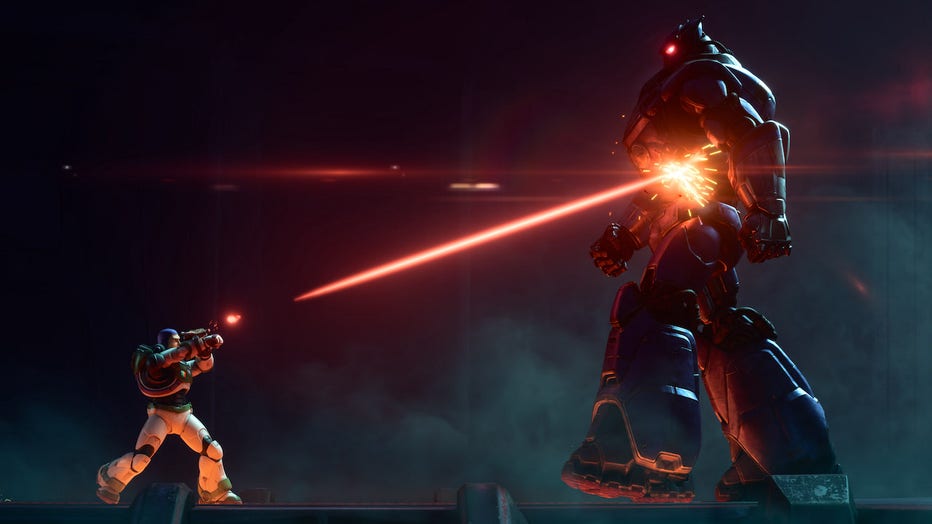 EVIL EMPEROR – Disney and Pixar’s "Lightyear" is a sci-fi action adventure and the definitive origin story of Buzz Lightyear (voice of Chris Evans), the hero who inspired the toy. The story, which follows the legendary Space Ranger on an intergalacti

Starring Chris Evans as the titular space ranger, "Lightyear" is (as the film’s opening text tells us) meant to be the film that Andy, the resident toy-owner of "Toy Story," saw before the events of the first film – in other words, the movie that inspired him to ask his parents for a Buzz Lightyear toy for his birthday. This Buzz is a driven, lone-wolf space ranger whose world is thrown into turmoil after he accidentally crashes a Star Command ship, stranding himself on a hostile alien planet. When he comes to the tragic realization that every attempt to get back to light-speed results in a four-year time jump, Buzz finds himself aligning with an unlikely group of heroes (including the granddaughter of his best friend) to crack the secret to hyper-speed, destroy the terrifying Zurg ship and find a way to return home once and for all.

WATCH FREE ON TUBI: Welcome to the "Hotel Transylvania"

To the film’s credit, creating a film that Andy would’ve seen in the ‘90s allows "Lightyear" to dodge any confusing questions about the "Toy Story" timeline, toy sentience and other messy issues that would’ve arisen had screenwriters Jason Headley and Angus MacLane attempted to set "Lightyear" in the "Toy Story" world. (MacLane is also the film’s director.) Instead, by making "Lightyear" its own film, Headley and MacLane give themselves the creative freedom to craft a compelling narrative that doesn’t need to tie into the canon. The result is a surprisingly complicated time-travel story that explores grief, self-love and the importance of knowing when to ask for help. 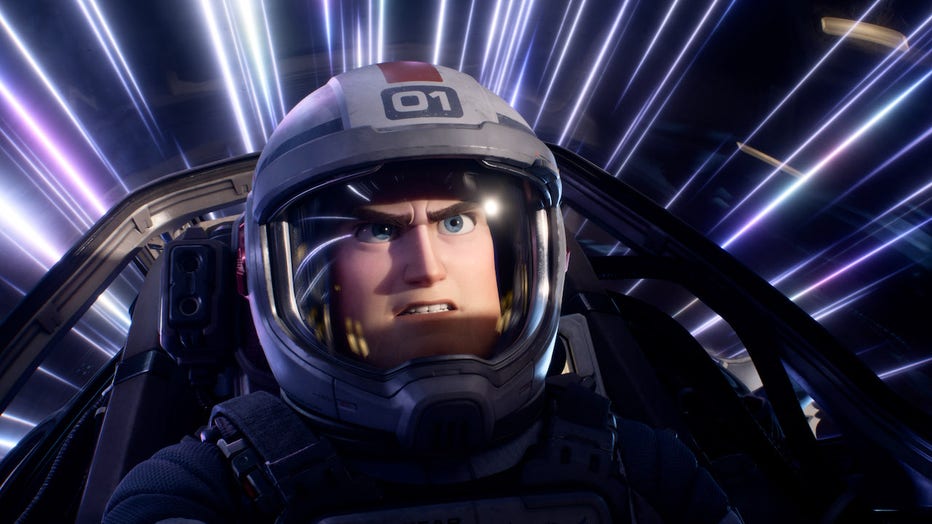 AND BEYOND -- Disney and Pixar’s "Lightyear" is an all-new, original feature film that presents the definitive origin story of Buzz Lightyear (voice of Chris Evans)—the hero who inspired the toy—introducing the legendary Space Ranger who would win ge

Evans makes a passable attempt at mimicking the distinctive cadence Tim Allen gave the toy Buzz in the "Toy Story" trilogy, but the depth and emotionality Evans brings to the character more than make up for any shortcomings in the imitation department. Allen’s Buzz is the comic relief while Tom Hanks’ Woody plays the role of the straight man, but surprisingly, "Lightyear" and Evans take Buzz quite seriously as a protagonist — more often than not, he’s the stick-in-the-mud straight man, the voice of reason in a room full of chaos.

There’s real emotional maturity to the character arc "Lightyear" develops for Buzz; once again, Pixar calls on its uncanny ability to wring tears from an audience regardless of the subject matter. Buzz, a military man through and through who lives by the mantra of "finishing the mission," spends a large chunk of the film stricken with guilt over stranding the crew of the Star Command vessel. It’s surprisingly tragic, especially given how quickly it’s addressed in the film, and the emotional impact of these early scenes resonates well past the first act.

Without question, Buzz serves as the film’s emotional anchor, and when the (now obligatory) surprise villain reveal comes around, it’s Buzz’s stake in the situation that helps the reveal land (even if some of the plot mechanics behind it feel a little convoluted). Nearly every truly wonderful moment of "Lightyear" results from the film’s investment in Buzz as a character and the emotional burden he carries. It’s not the most kid-friendly of character arcs, but it’s certainly a compelling approach. 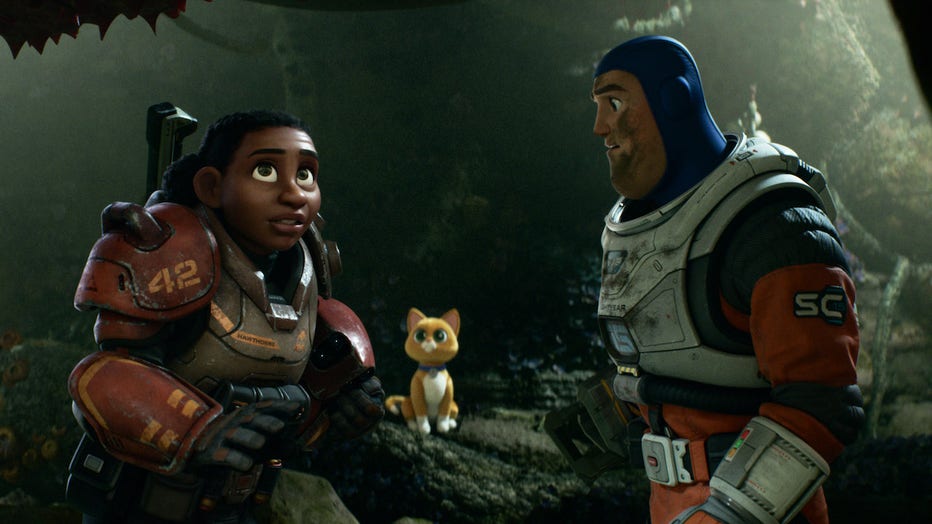 TEAMING UP – In Disney and Pixar’s "Lightyear," Izzy Hawthorne (voice of Keke Palmer), the eager leader of a team of cadets called the Junior Zap Patrol, teams up with Buzz Lightyear (voice of Chris Evans) and his dutiful robot companion, Sox (voice

The film’s supporting cast, however, isn’t anywhere near as well fleshed-out or impactful — perhaps that was unavoidable, given the amount of screentime devoted to Buzz. Keke Palmer stars as Izzy, the granddaughter of Buzz’s best friend Alisha Hawthorne, and though she’s confident and self-assured, she struggles with a crippling fear of space — an inconvenient affliction for an aspiring space ranger. Izzy makes a serviceable ingenue to the older, darker Buzz, but her subplot feels underbaked.

Taika Waititi and Dale Soules round out the rag-tag bunch as Mo and Darby, a cowardly, accident-prone trainee and an aging ex-con respectively, who act as the film’s comic relief. But their combined presence comes nowhere close to eliciting the laughs that robot cat Sox nabs (courtesy of clever writing and a scene-stealing vocal performance from Peter Sohn.) It’s difficult to shake the feeling that the absence of Mo and Darby would’ve allowed for a much more effective interpersonal connection between Buzz and Izzy.

Still, despite some flat side characters and a by-the-numbers plot structure/villain twist, there’s enough ingenuity and emotional gravitas in "Lightyear" to make for a compelling, if predictable, trip to the stars.

About the writer: Lauren Coates is a Chicago-based film critic and entertainment writer with a passion for queer and female-led media and an everlasting love for all things sci-fi. You can find her on twitter @laurenjcoates.

Make it a double feature with "The NeverEnding Story," streaming free on Tubi

The NeverEnding Story (1984): It’s a feeling all book-lovers know well: You get so wrapped up in a story that you lose all track of time, and before you know it you’re hiding in the attic of your elementary school, reading about a hero named Atreyu (Noah Hathaway) who just really wants to get his horse Artax through the swamp, you know? And then all of a sudden you’re somehow part of the story and you need to help save Fantasia from the clutches of The Nothing. We’ve all been there! Rated PG. 94 minutes. Dir: Wolfgang Petersen. Featuring Noah Hathaway, Barret Oliver, Tami Stronach, Moses Gunn, Gerald McRaney, Alan Oppenheimer.

Is "Lightyear" streaming on Disney+?

Not yet, alas — for now, to go "to infinity and beyond," you’ll need to go to a movie theater.