Researchers have discovered a new type of wave within our sun and it’s traveling far faster than previously theorized.

Observations done by NYU Abu Dhabi’s (NYUAD) Center for Space Science analyzed space and ground-based data from the past 25 years in order to reach their findings, according to a news release based on the study which was published in the journal Nature on March 24.

The mysterious high-frequency retrograde (HFR) waves move in the opposite direction of the Sun’s natural rotation and appear to be moving in a swirling motion, according to the news release.

These waves are moving three times the speed established by current theory.

Scientists aren’t sure if other well-known properties of the sun such as magnetism, gravity or convection, could explain why these new waves are moving more quickly.

"If the HFR waves could be attributed to any of these three processes, then the finding would have answered some open questions we still have about the Sun," said Chris S. Hanson, the study’s lead author. "However, these new waves don’t appear to be a result of these processes, and that’s exciting because it leads to a whole new set of questions."

This new discovery could help astronomers better understand what exactly is going on inside the sun, though researchers did not specify whether or not this new wave frequency would have any impacts on Earth, according to Shravan Hanasoge, a co-author.

"The very existence of HFR modes and their origin is a true mystery and may allude to exciting physics at play," said Hanasoge.

Two images were taken by the Orbiter and the results show a stunning image with "unprecedented detail," according to the ESA.

The Orbiter’s Extreme Ultraviolet Imager (EUI) took the highest resolution image of the sun’s full disc and outer atmosphere, the corona, that has ever been taken.

"Another image, taken by the Spectral Imaging of the Coronal Environment (SPICE) instrument represents the first full Sun image of its kind in 50 years, and by far the best one, taken at the Lyman-beta wavelength of ultraviolet light that is emitted by hydrogen gas," the ESA continued.

The Orbiter was about 75 million kilometers away from the sun before taking the images which is about halfway between Earth and the sun.

The entire photo produced by the Orbiter was a mosaic of 25 individual images that fit together like a puzzle to capture the entirety of the sun, according to the ESA.

"Taken one after the other, the full image was captured over a period of more than four hours because each tile takes about 10 minutes, including the time for the spacecraft to point from one segment to the next," the ESA added. 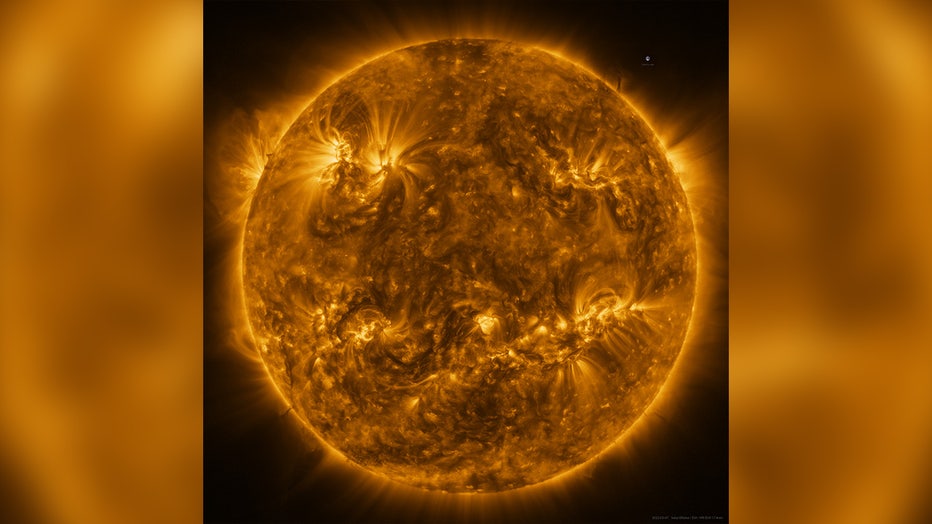 The Sun as seen by Solar Orbiter in extreme ultraviolet light from a distance of roughly 75 million kilometres. The image is a mosaic of 25 individual images taken on 7 March by the high resolution telescope of the Extreme Ultraviolet Imager (EUI) in

In another astounding first, in April 2021, a NASA spacecraft officially "touched" the sun, plunging through the unexplored solar atmosphere known as the corona.

Scientists announced the news in December 2021 during a meeting of the American Geophysical Union.

The Parker Solar Probe actually flew through the corona in April during the spacecraft’s eighth close approach to the sun. Scientists said it took a few months to get the data back and then several more months to confirm.

Launched in 2018, Parker was 8 million miles (13 million kilometers) from the center of the sun when it first crossed the jagged, uneven boundary between the solar atmosphere and outgoing solar wind. The spacecraft dipped in and out of the corona at least three times, each a smooth transition, according to scientists.

"The first and most dramatic time we were below for about five hours ... Now you might think five hours, that doesn’t sound big," the University of Michigan’s Justin Kasper told reporters. But he noted that Parker was moving so fast it covered a vast distance during that time, tearing along at more than 62 miles (100 kilometers) per second.