NASA’s Mars helicopter was set to make its first flight attempt on Sunday, but the flight has now been delayed as officials review an issue in data reported from the machine.

NASA said the data in question came from the Ingenuity Mars helicopter late on April 9 during a high-speed spin test. The test ended early due to a "watchdog" timer expiration, which oversees the test and alerts of any issues.

The "watchdog" ended the test ended as it was trying to transition the flight computer from "pre-flight" to "flight" mode.

"The helicopter team is reviewing telemetry to diagnose and understand the issue," NASA said. "Following that, they will reschedule the full-speed text."

NASA added that the 4-pound helicopter is safe and healthy, and they hope to now fly Ingenuity no earlier than April 14, 2021.

Ingenuity took the 300 million-mile journey to land on the Red Planet in February while attached to the belly of the Perseverance rover. Once its flight takes place, it will be the first powered, controlled flight on another planet. 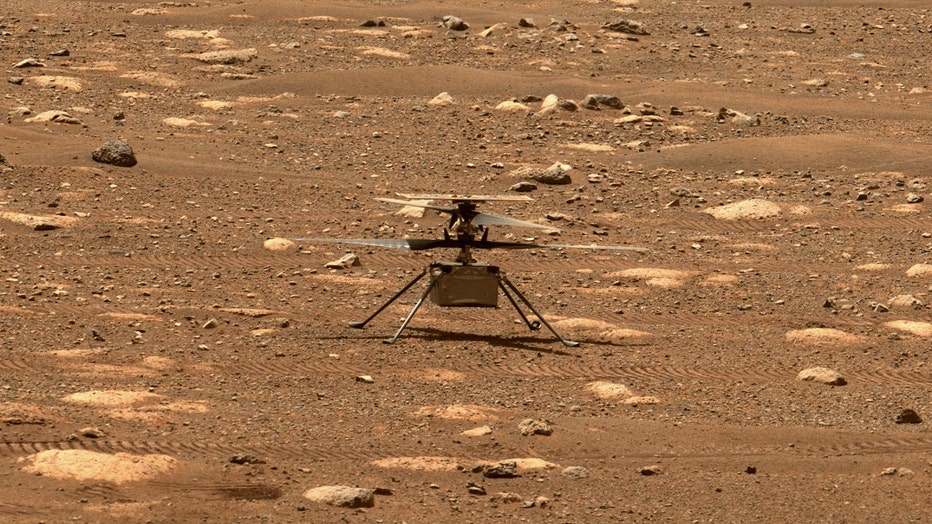 NASA’s Ingenuity helicopter unlocked its blades, allowing them to spin freely, on April 7, 2021, the 47th Martian day, or sol, of the mission. Credit: NASA/JPL-Caltech

In a nod to past scientific exploration, NASA partnered with the Carillon Historical Park to include a tiny piece of fabric from the Wright brothers’ first aircraft, the 1903 Wright Flyer I.

The Wrights’ fabric provided NASA with the perfect way to include the pioneers on the first Martian flight. Engineers used an insulative tape to wrap the fabric, once called the "Pride of the West," around a cable located beneath Ingenuity’s solar panel.

Amanda Wright Lane and Stephen Wright, the great grand-niece and nephew of the Wright brothers, said their ancestors "would be pleased to know that a little piece of their 1903 Wright Flyer I is going to soar into history again on Mars."

NASA said flying on Mars won’t be as easy as flying on Earth. Mars boasts significant gravity and the Martian atmosphere is only 1% as dense as Earth’s at the surface.

Earth gets twice as much solar energy as its outer neighbor during the day. And Martian nights can see temperatures as low as -130 degrees Farenheight, which can freeze unprotected electrical components.

This story was reported from Detroit. Jordan Smith contributed