NASA’s Mars rover, Perseverance, extracted oxygen from the red planet’s atmosphere successfully, marking the first time in history a man-made device was able to isolate oxygen on another planet, according to an April 21 news release.

"While the technology demonstration is just getting started, it could pave the way for science fiction to become science fact – isolating and storing oxygen on Mars to help power rockets that could lift astronauts off the planet’s surface," according to NASA. 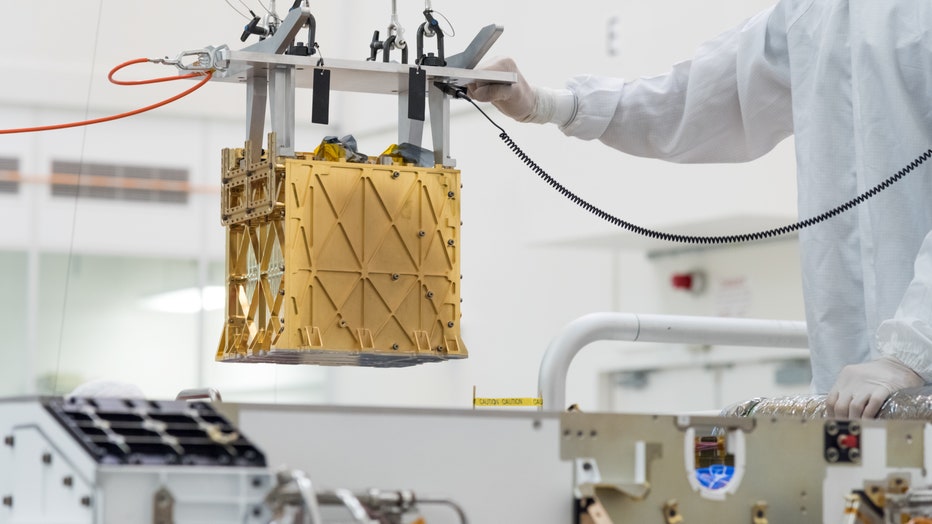 FILE - Technicians in the clean room are carefully lowering the Mars Oxygen In-Situ Resource Utilization Experiment (MOXIE) instrument into the belly of the Perseverance rover.

MOXIE was able to produce 5 grams of oxygen, which is equivalent to about 10 minutes’ worth, according to NASA. The device was designed to create 10 grams of oxygen every hour.

"In contrast, astronauts living and working on Mars would require far less oxygen to breathe. The astronauts who spend a year on the surface will maybe use one metric ton between them," said MOXIE’s principal investigator, Michael Hecht of the Massachusetts Institute of Technology’s Haystack Observatory.

"Hauling 25 metric tons of oxygen from Earth to Mars would be an arduous task. Transporting a one-ton oxygen converter – a larger, more powerful descendant of MOXIE that could produce those 25 tons – would be far more economical and practical," Hecht said.

NASA also hopes that devices such as MOXIE could one day help astronauts breathe while exploring the red planet.

"This is a critical first step at converting carbon dioxide to oxygen on Mars," said Jim Reuter, associate administrator of NASA’s Space Technology Mission Directorate (STMD). "MOXIE has more work to do, but the results from this technology demonstration are full of promise as we move toward our goal of one day seeing humans on Mars. Oxygen isn’t just the stuff we breathe. Rocket propellant depends on oxygen, and future explorers will depend on producing propellant on Mars to make the trip home."

"MOXIE isn’t just the first instrument to produce oxygen on another world," said Trudy Kortes, director of technology demonstrations within STMD. "It’s taking regolith, the substance you find on the ground, and putting it through a processing plant, making it into a large structure, or taking carbon dioxide – the bulk of the atmosphere – and converting it into oxygen," she said. "This process allows us to convert these abundant materials into useable things: propellant, breathable air, or, combined with hydrogen, water."

Just a few days before MOXIE produced oxygen on another planet for the first time, NASA’s experimental helicopter Ingenuity rose into the thin air above the dusty red surface of Mars on April 19, achieving the first powered flight by an aircraft on another planet.

RELATED: Is there life on Mars? Perseverance lands on the red planet, searches for signs

The triumph was hailed as a Wright brothers moment. The mini 4-pound (1.8-kilogram) copter even carried a bit of wing fabric from the Wright Flyer that made similar history at Kitty Hawk, North Carolina, in 1903.

It was a brief hop — just 39 seconds and 10 feet (3 meters) — but accomplished all the major milestones.

"Goosebumps. It looks just the way we had tested," project manager MiMi Aung said as she watched the flight video during a later briefing. "Absolutely beautiful flight. I don’t think I can ever stop watching it over and over again."