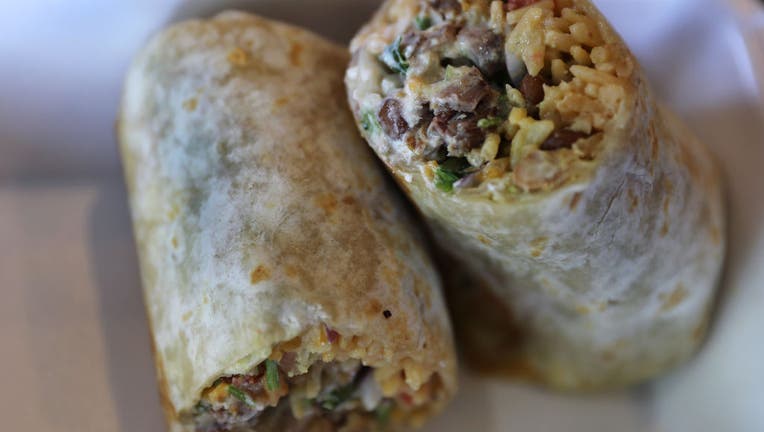 BOSTON, MA - MAY 22: A burrito is pictured at Cactus Grill at 44 Maverick Square in East Boston on May 22, 2019. (Photo by Pat Greenhouse/The Boston Globe via Getty Images)

Thursday, April 7 is National Burrito Day, a time to savor the delicious Mexican dish, and several restaurant chains are participating by offering deals and freebies.

Whether you prefer a breakfast burrito or something spicier and filling for lunch or dinner, there is bound to be something for everyone on a day like today. Better yet, Thursday also happens to be National Beer Day — so burrito lovers can even wash it down with a cold brew in celebration.

Here’s a wrap-up of some restaurant deals in honor of National Burrito Day 2022:

Chipotle Rewards members on April 7 can get one free side or entrée topping of queso blanco with the purchase of a regular entrée when they use the promo code "NBD2022" on the Chipotle app or at Chipotle.com.

The restaurant chain is also launching a new burrito-themed game with Roblox, allowing users to roll a virtual burrito. The game launches on April 7 at 6:30 p.m. ET / 3:30 p.m. PT, and the first 100,000 people who play the game and successfully roll one burrito will receive a code that can be redeemed for a free burrito or regular entrée via the Chipotle app or Chipotle.com.

New and existing Loco Rewards members will automatically receive a special buy one, get one free burrito reward valid on April 7. The offer is good for all burritos, including the new Mexican Shredded Beef Birria Burrito Box.

Moe Rewards members can get any burrito or bowl for $5.99 nationwide on April 7 when ordering through the app, Moes.com or in restaurants.

Customers who spend $15 through the Taco Bell app can get one burrito for free on April 7. Customers can also get a free Doritos Locos Taco just for signing up for Taco Bell rewards.

Plant-based foods are on the rise

More and more restaurants are the country are adding vegan and vegetarian options to their menus.