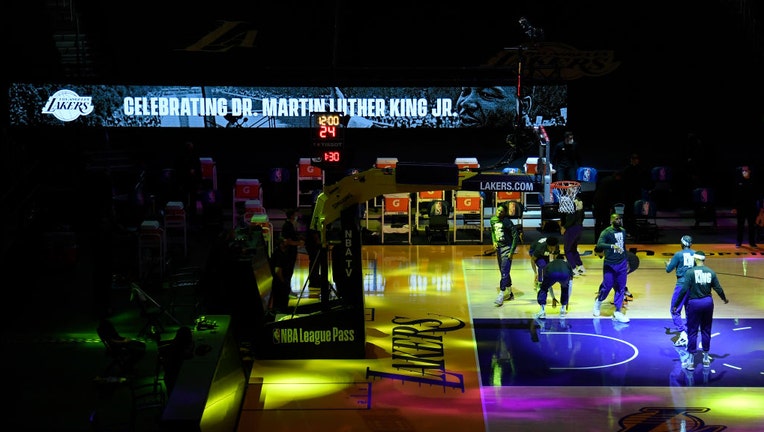 FILE-LeBron James #23 of the Los Angeles Lakers walks on to the court before the game against the Golden State Warriors on Martin Luther King Day at Staples Center on January 18, 2021. (Harry How/Getty Images)

As the nation prepares to commemorate the life and legacy of the Rev. Martin Luther King Jr. with celebrations, the NBA will have its annual schedule of games on Monday, Jan. 16.

RELATED: What is King-Lee Day? History of the holiday still celebrated in 2 states

Nine NBA games are scheduled, including the traditional home games in King’s birthplace of Atlanta and Memphis, where he was killed at the age of 39. The nationally televised games are listed below.

Several NBA teams will have celebrations and events on MLK Day. The Washington Wizards will wear "Now is the Time to Make Justice a Reality for All" warmup shirts. And the team will also honor Dr. King with a pregame panel, according to the team’s website.

The Milwaukee Bucks are hosting a nonprofit fair during Monday’s game inspired by King’s "volunteerism and community advocacy," the Bucks shared on their website. In Memphis, the Grizzlies will host events honoring the legacy of King, and the Atlanta Hawks will have an event and a performance during the game as a tribute to the civil rights leader.