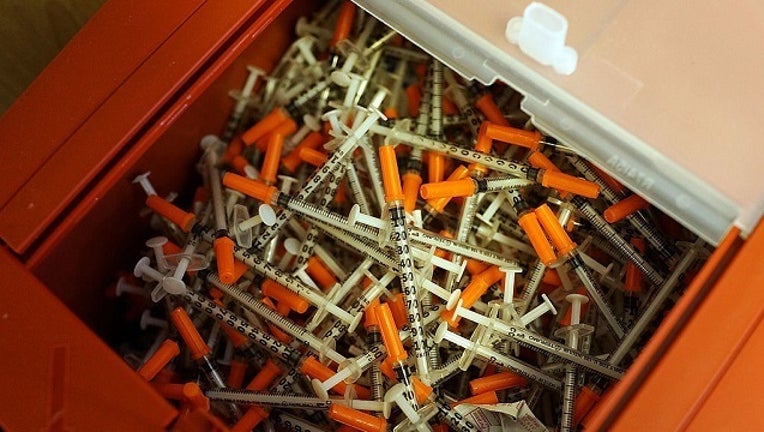 Used syringes are viewed at a needle exchange clinic where users can pick up new syringes and other clean items for those dependent on heroin on February 6, 2014 in St. Johnsbury, Vermont. (Photo by Spencer Platt/Getty Images)

They hide in weeds along hiking trails and in playground grass. They wash into rivers and float downstream to land on beaches. They pepper baseball dugouts, sidewalks and streets. Syringes left by drug users amid the heroin crisis are turning up everywhere.

People, often children, risk getting stuck by discarded needles, raising the prospect they could contract blood-borne diseases such as hepatitis or HIV or be exposed to remnants of heroin or other drugs.

It’s unclear whether anyone has gotten sick, but the reports of children finding the needles can be sickening in their own right. One 6-year-old girl in California mistook a discarded syringe for a thermometer and put it in her mouth; she was unharmed.

Needles turn up in places like parks, baseball diamonds, trails and beaches — isolated spots where drug users can gather and attract little attention, and often the same spots used by the public for recreation. The needles are tossed out of carelessness or the fear of being prosecuted for possessing them.

One child was poked by a needle left on the grounds of a Utah elementary school. Another youngster stepped on one while playing on a beach in New Hampshire.

Even if adults or children don’t get sick, they still must endure an unsettling battery of tests to make sure they didn’t catch anything. The girl who put a syringe in her mouth was not poked but had to be tested for hepatitis B and C, her mother said.

Authorities are now offering advice if you or your children should encounter any needles:

DON’T PICK THEM UP

You could get exposed to drugs or disease, or unwittingly dispose of them improperly.

CALL SOMEONE TO PICK THEM UP

Check with your local information hotline or health department, which can take care of it or direct you to people who can. Don’t call 911 unless directed, or unless there is imminent danger or an emergency.

IF YOU DO IT YOURSELF

You’re not advised to pick them up, but if you do, minimize any hand contact. Use sturdy gloves, disposable tongs, a shovel or dustpan, and put them in a puncture-proof container.

IF YOU GET POKED

Don’t panic. Don’t suck the wound. Go to your doctor, an emergency room or an urgent care clinic for further guidance, as well as possible medical tests and immunizations.

WHAT TO TELL YOUR KIDS

Show them what a syringe looks like and use age-appropriate language to describe why they should stay away from it. Tell them that if they see any to get an adult, who should follow the steps described above.