The creator of "Squid Game," the immensely popular international hit for Netflix, revealed how the financial crisis over the past decade as well as the election of Donald Trump inspired him to make the show.

"Squid Game" follows 456 people who are all in dire financial situations. They’re tapped by a mysterious organization to join a series of six children’s games for a prize of roughly $40 million. However, it quickly becomes apparent that the consequences for losing any of these games are lethal. In addition to its violence and nail-biting drama, the show is a commentary on capitalism and economic disparity between the ultra-rich and the poor.

Filmmaker Hwang Dong-hyuk spoke with IndieWire where he revealed that he originally came up with the idea of "Squid Game," which he envisioned at the time as a movie, in 2008.

"At the time, there was the Lehman Brothers crisis; the Korean economy was badly affected and I was also economically struggling," he explained. "Over the past 10 years, there were a lot of issues: There was the cryptocurrency boom, where people around the world, especially young people in Korea, would go all-in and invest all their money into cryptocurrencies. And there was the rise of IT giants like Facebook, Google, and in Korea, there’s Naver, and they are just restructuring our lives. It’s innovative but these IT giants also got very rich." 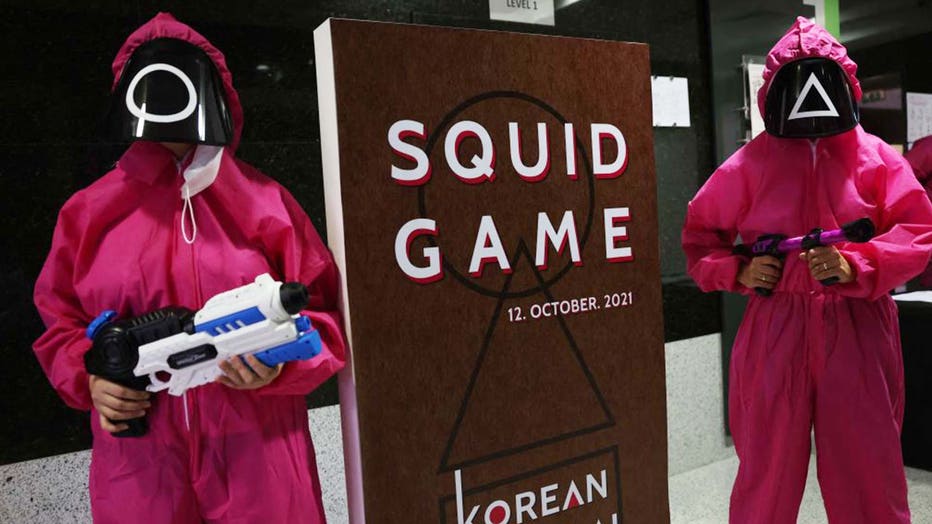 FILE- Participants take part in an event where they play the games of Netflix smash hit "Squid Game" at the Korean Cultural Centre in Abu Dhabi, on Oct. 12, 2021. (GIUSEPPE CACACE/AFP via Getty Images)

However, it wasn’t until he noticed the election of Donald Trump in the U.S. eight years later that he finally became convinced that the world was ready for "Squid Game."

"And then Donald Trump became the president of the United States and I think he kind of resembles one of the VIPs in the Squid Game," he explained. "It’s almost like he’s running a game show, not a country, like giving people horror. After all these issues happened, I thought it was about time that this show goes out into the world."

For those unfamiliar, VIPs in the context of the show refers to the handful of super-rich people who spectate the games and bet on the outcomes. They wear masks to protect their anonymity as they are given extravagant VIP treatment by the people who run things.

The creator, who also directed every episode, noted that the concept simply became more and more relevant over time as Netflix’s restrictions to experiment with more creative endeavors broadened.

"The concept itself was not realistic at the time 10 years ago. It was too bizarre and people thought it wouldn’t be a money-making film, also because it was violent and there would be some issue with ratings and the target audience would shrink," Dong-hyuk said. "But 10 years had passed and for Netflix, their distribution system is different from films; they have less restrictions, so I could go about my own way of making this film and I felt less pressure about these issues."

It seems Dong-hyuk was correct about the relevancy of "Squid Game" not just in South Korea, but throughout the world as well. The TV show was recently heralded by Netflix boss Ted Sarandos as the most popular show on the platform, even beyond former hits like "House of Cards" and "The Crown." While those shows were profitable for the streaming giant in its home country of the United States, "Squid Game" is topping the charts around the world.