After a days-long count, Democrats have maintained control of the U.S. Senate. The closely divided House still remains too close to call.

The Nevada Senate race was called Saturday night by the Associated Press in favor of Democratic Sen. Catherine Cortez Masto with 48.7% of the votes, with Republican challenger Adam Laxal at 48.2%. The difference was made up of about just 5,000 votes.

Before the race had been called, each party had 49 seats in the Senate after Tuesday’s election results. Two seats were still in play — the one that has since been granted to Cortez Masto, and the second has yet to be determined in Georgia by a runoff election.

Cortez Masto’s win puts the Democrats at 50 seats. If the Georgia Senate seat stays blue, Democrats will have a 51-49 majority. If the seat flips red, a 50-50 tie will still be in favor of the Democrats, as Vice President Kamala Harris has the tiebreaking vote.

In Pennsylvania, a win for Democrat John Fetterman helped flip a Republican-controlled Senate seat when he bested Republican Dr. Mehmet Oz. It was seen as a major rebuke to former president Donald Trump, whose endorsement helped Oz win the GOP's hard-fought primary.

Incumbent Democratic Sen. Mark Kelly defeated Republican venture capitalist Blake Masters in the crucial swing state of Arizona, which brought the Democrats within one seat of retaining their majority.

Democrats also held a crucial Senate seat in New Hampshire, where incumbent Maggie Hassan defeated Republican Don Bolduc, a retired Army general who had initially promoted Trump’s lies about the 2020 election being marred by widespread fraud that did not occur but tried to shift away from some of the more extreme positions he took during the GOP primary.

Following the 2020 election, the Senate has been split evenly between Republicans and Democrats, with Vice President Kamala Harris giving Democrats the deciding vote.

If Democrats gain control of the House and Senate, they would likely restart negotiations on some of President Joe Biden’s agenda items that haven’t passed yet, including his new package of social and economic programs that stalled amid internal Democratic disagreements.

They would also have another opportunity to pass national protections for abortion, same-sex marriage and voting rights.

If Republicans take control of the House, a Democrat-led Senate would be unable to find much common ground with the other chamber, but Republicans could try to win over Democratic Senate moderates on some legislation. Much of Biden’s legislative achievements in office have been the byproduct of bipartisan negotiations in the Senate.

Will Republicans take control of the House?

House Minority Leader Kevin McCarthy is confident he will be Speaker next year, but control of the House hangs in the balance.

It’s still too early to tell whether Republicans will take control of the House as expected.

Votes were still being counted in several high-profile races, including California’s 47th, where two-term Democratic Rep. Katie Porter is locked in a competitive fight with Republican Scott Baugh.

More than a dozen races in California were still uncalled as of Saturday, though only a handful were seen as a toss-up.

Republican firebrand Lauren Boebert is in an unexpectedly tight race against in Colorado’s 3rd District, which covers 26 counties across the expansive southwestern half of the state. She was narrowly ahead of Democrat Adam Frisch as of Saturday.

Democrats showed surprising strength, defeating Republicans in a series of competitive races and defying expectations that high inflation and President Joe Biden’s low approval ratings would drag the party down.

Republicans ran into stiff competition in their march across the country, dashing hopes for the sweeping gains they had promised, particularly in the House. Instead, they inched toward another narrowly split Congress. 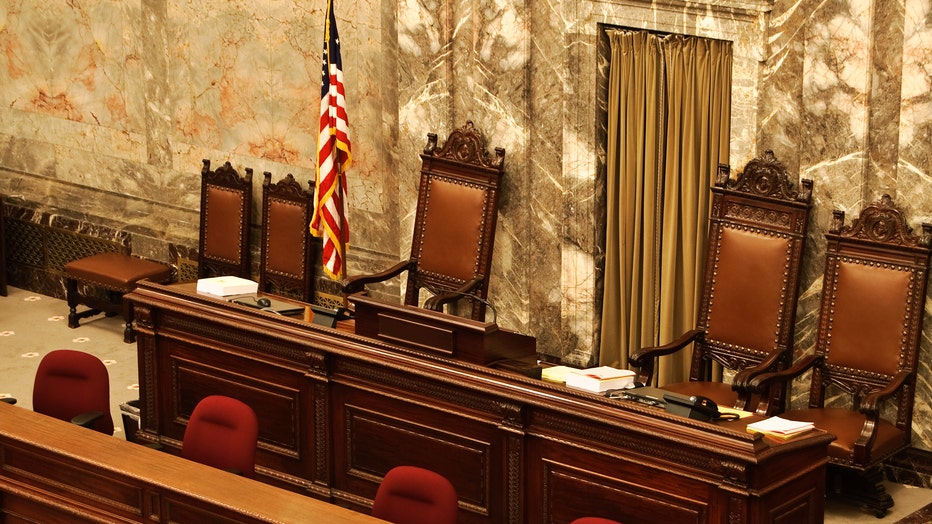 FILE PHOTO - Front seats of the Washington State Senate or House of Representative chamber, reserved for the Speaker of the House/Senate President and clerks. Location: Olympia, Washington. via Getty Images

Former President Donald Trump had endorsed more than 300 candidates, hoping the night would end in a red wave he could ride to the 2024 Republican presidential nomination.

"The RED WAVE did not happen," defeated Republican Rep. Mayra Flores of Texas said in a tweet.

Many conservatives put the blame on Trump for the GOP’s underwhelming midterm performance, while others compared Trump's failure to secure wins across the country with the huge wave of support for Gov. Ron DeSantis and Republicans in Florida.

Even with a slim majority, the Republicans could bring a new intensity to Capitol Hill with promises to end Biden’s most ambitious plans, tighten congressional oversight and launch grueling investigations — even, potentially, impeachment of the president.