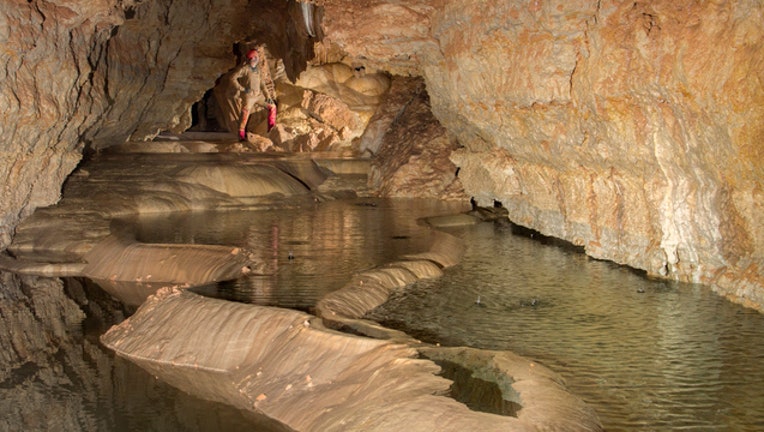 SAN ANTONIO, Texas (FOX 7 Austin) - A never before seen passage was recently unearthed at the Natural Bridge Caverns. It is the largest discovery within Texas' largest cavern system since 1967.

Guano samples were collected from two areas and were sent to a laboratory for carbon dating, which determined that the roosts were approximately 6,300 and 7,500 years old respectively.

As explorers move deeper into the cavern, each expedition takes longer, with the latest taking more than 19 hours to complete, according to a press release from Natural Bridge Caverns.

It now takes a minimum of six hours of hard and exhaustive caving, with some team members carrying heavy 30 to 50-pound packs filled with gear and equipment, to reach unexplored areas now.

These challenges have the Wuest family considering the idea of drilling an entrance shaft to provide faster and safer access and to reduce the impact on the current passages used to enter this new area.

"Since May 8, we have discovered more than 1,600 feet of new passages, including spectacular chambers and lakes," said Brad Wuest, President and co-owner of Natural Bridge Caverns.

"Just thinking that these incredible rooms and passages have been here under our ranch, never before seen and just waiting for us to find is amazing. The best part for us is that the cavern system shows no end in sight."

Natural Bridge Caverns offers year-round activities including multiple cavern tours, a maze, a ropes course and zip lines, gemstone mining, restaurants, and shopping. Natural Bridge Caverns is owned and operated by the Wuest family and is a designated State Historical Site, National Natural Landmark, and is listed on the National Register of Historic Places.