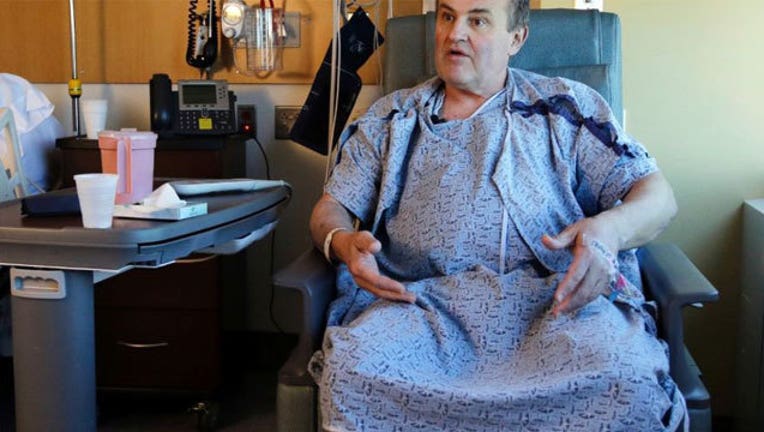 BOSTON (AP) — The recipient of the nation's first penis transplant says he is looking forward to walking out of the hospital a "complete" man.

"There is no doubt in my mind that everything is going to work. And I mean everything," 64-year-old Thomas Manning said Wednesday with a grin as he continued to recover at Boston's Massachusetts General Hospital. "You can interpret that any way you wish."

Seated by a window overlooking the Charles River, Manning was upbeat and chatty after undergoing the 15-hour operation last week.

The former Halifax, Massachusetts, bank courier whose organ was amputated after he was diagnosed with penile cancer in 2012 has been ambling around his room with a walker and said he doesn't feel any pain.

He has taken a few peeks under the gauze covering his new penis, which was taken from a deceased donor, and the swelling and discoloration appear to be diminishing. He said he believes the nerves are even starting to reconnect.

"I just can feel like movement and life in it already," Manning said. "I feel that we belong together."

Manning is just the third man in the world to receive a new penis, following transplants in South Africa in 2014 and China in 2005.

The South African patient remains healthy and was able to father a child, though the baby was stillborn. The Chinese man, however, had his new penis removed weeks later because he said it made him and his wife uncomfortable.

The revolutionary procedure could give hope to cancer survivors, accident victims and maimed soldiers. It could also benefit transgender people.

Manning's doctors said in announcing the operation on Monday that they hoped to release him sometime this week. But Manning said he will stay and undergo largely cosmetic surgery on Monday to improve the organ's appearance.

He vowed: "I'm going to walk out of here complete."

Doctors said that it will be a few more weeks before Manning can urinate normally and that sexual function is farther down the line. But reproduction is not possible since Manning didn't receive new testes.

As for the prospects of having a sex life again, Manning, who is single, never married and has no children, said: "When it happens it happens. I don't have to push it. I hope to be around for another 20 or 30 years. Will it still be working by then? I sure hope so."

Manning's penile cancer was discovered after a workplace accident in which he slipped on ice. Doctors told him they needed to take aggressive action to save his life.

"Part of me was really devastated," Manning said. "I didn't feel like less of a man, but I went through my own version of hell."

He said he had been asking his doctor almost ever since to put him on the short list for a transplant.

"I would have went to the moon for this," Manning said. "I mean, why not? They cut my penis off, and I wanted it back. It's not that complicated."

But Manning said he never hesitated about going public.

"The bottom line is you can't worry about what other people think. You've got to get on with your life," he said. "I happen to be the first person to receive a penis transplant. What's the big deal?"

Follow Philip Marcelo at twitter.com/philmarcelo. His work can be found at http://bigstory.ap.org/journalist/philip-marcelo