Governor Newsom altered the stay at home order by allowing scheduled, essential surgeries to resume on Wednesday. Increasing testing capacity remains a goal in order to return to some semblance of normal.

SACRAMENTO, Calif. - California Gov. Gavin Newsom gave what he called a “deep dive” update Wednesday of the state’s ability to test for the coronavirus and to track and isolate people who have it, one of the six indicators he says is key to lifting a “stay-at-home” order that has slowed the spread of the disease while forcing millions of people to file for unemployment benefits.

"When can we go back?" Newsom asked rhetorically. "I wish I could prescribe a specific date. But there is no light switch and there is no date."

Instead, he focused on what he called "indicator 3," handling hospital surges.

He said California is looking at Washington and Oregon as models, and he believes that doctors and hospitals can begin to start scheduling surgeries again for patients who need tumors removed and heart valves replaced.

Newsom also focused on expanding tests for the coronavirus.

Roughly, 465,000 coronavirus tests have been done so far.  Still, in a state of nearly 40 million people, that’s not enough for public health officials to know for sure the reach of the highly contagious virus that is still causing outbreaks across the state in nursing homes and homeless shelters.

However, Newsom said the numbers are moving in the right direction.

He also thanked President Donald Trump for giving California 100,000 swabs this week and 250,000 for next week.

In addition, Newsom said that California will be adding 86 new sites in "testing deserts," primarily in minority and rural communities, which have been underserved. Two companies, Verily and OptumServe, are spearheading that effort by setting up the sites.

As of Wednesday, at least 1,371 people have died from the new coronavirus in California. 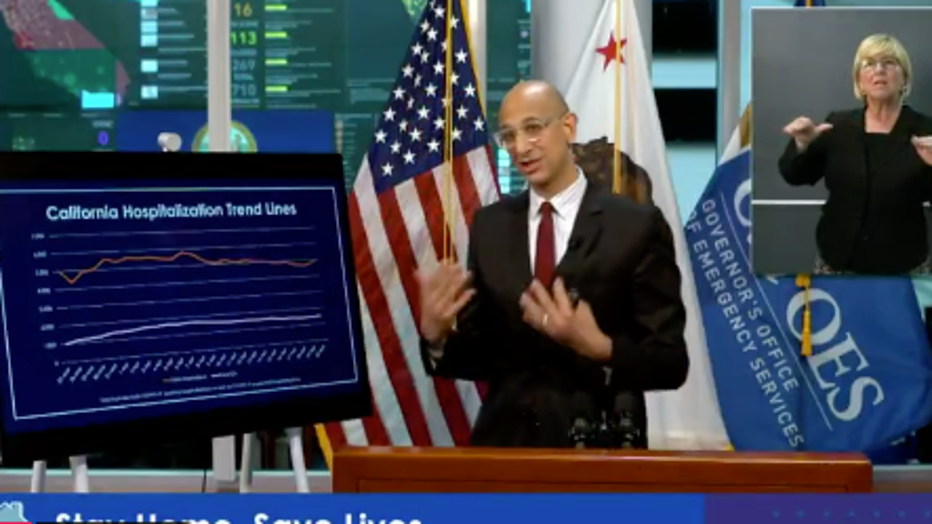 Dr. Mark Ghaly, Secretary of the California Health and Human Services, said we need more PPE before the stay-at-home order is revamped.