Tokyo Olympic Games may not be ‘conventional’

Tokyo Olympics CEO Toshiro Muto said next year's games might not resemble what fans are accustomed to.

The NHL announced Tuesday it will abandon the rest of the regular season and go straight into the playoffs with 24 teams instead of 16 if it is able to resume play.

Commissioner Gary Bettman said the decision is not a guarantee that games are coming back. The NHL and the NHL Players' Association must still figure out health and safety protocols and solve other issues, including where to play.

Still, ironing out a format represents significant progress since global sports were basically shut down in March as the coronavirus outbreak turned into a pandemic. Bettman has said the goal has always been to play again and award the Stanley Cup, but details remain uncertain and there is no announced timetable of any kind.

RELATED: NASCAR to resume season May 17 with seven races in 10 days

Earlier this week, the league and NHLPA issued extensive protocols once players are allowed to return to their facilities. They include a maximum of six players on the ice at a time, no contact and no coaches for voluntary workouts. Teams at some point would likely hold three-week re-training camps.

Instead of limiting the Cup chase to the usual 16 teams that qualify for the playoffs, the league and players agreed to expand the field to 24 of its 31 teams because of the unusual circumstances.

That means the likes of the Montreal Canadiens are still alive despite being nine points out of a playoff spot when hockey was halted March 12. But not all teams will have the same path to hockey's storied trophy. 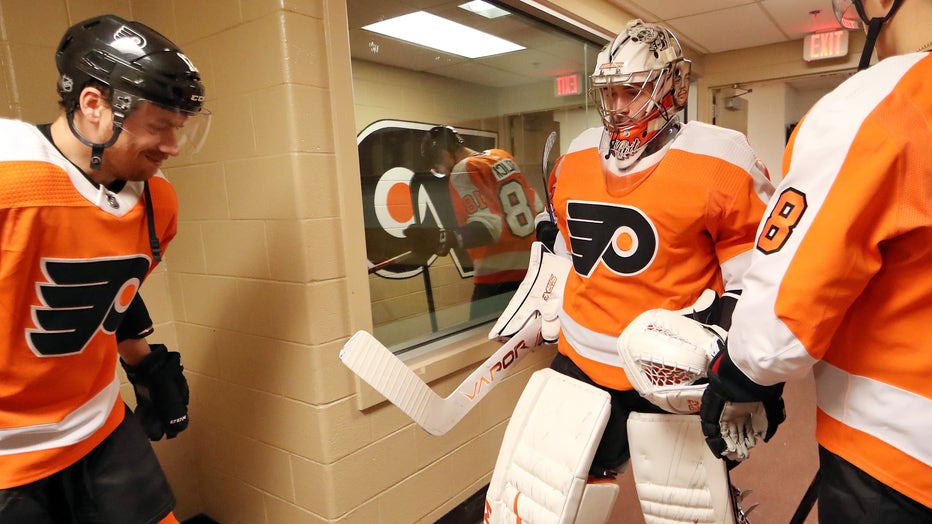 FILE - Carter Hart #79 of the Philadelphia Flyers walks towards the ice rink with teammates for warm-ups against the Buffalo Sabres on March 7, 2020 at the Wells Fargo Center in Philadelphia, Pennsylvania.

The top four teams in each conference ranked by points percentage — Boston, Tampa Bay, Washington and Philadelphia in the East and St. Louis, Colorado, Vegas and Dallas in the West — will play separate round-robin tournaments to determine seeding.

Those games are expected to be played without fans in a few locations. The league has not yet determined those sites, though Edmonton, Alberta, Columbus, Ohio, Toronto and Las Vegas were believed to be among the possibilities.

Many Americans are searching for future travel destinations amid COVID-19 lockdown restrictions easing.

“It’s not easy getting everybody on board with all the different countries, the players, the teams that were in the playoffs, teams that may not be in the playoffs and getting that all agreed upon with the union," Buffalo Sabres owner Kim Pegula told The Associated Press. “For us to even finish the season and award (the Stanley Cup), I know a lot of work went into it. But I know how important it was for our players, our fans, our league to make sure that we conclude it.”

The decision to call off the 189 regular-season games that were not played ends the season for Buffalo, New Jersey, Anaheim, Los Angeles, San Jose, Ottawa and Detroit.