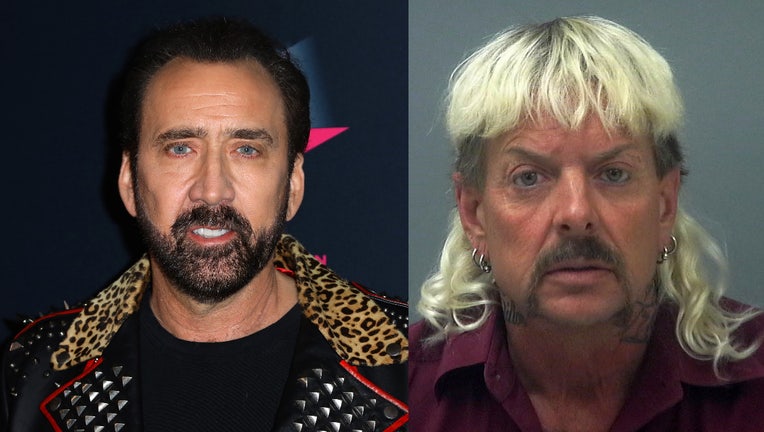 LOS ANGELES - At long last, fans of Netflix’s “Tiger King” know who will play the enigmatic Joe Exotic in a live-action dramatization.

Variety reports that Nicolas Cage will take on the role of Joseph Maldonado-Passage, better known as Joe Exotic, the former Oklahoma zookeeper who is currently serving time behind bars for his part in orchestrating a failed murder-for-hire plot against his rival, Big Cat Rescue CEO Carole Baskin.

The outlet reports that Cage will star in an eight-episode limited series produced by Imagine Television Studios and CBS Television Studios. The actor will also help executive produce the series through Saturn Films. However, it will not be based on Netflix’s breakout documentary series, “Tiger King.” Instead, Dan Lagana and Paul Young previously optioned the article “Joe Exotic: A dark Journey Into the World of a Man Gone Wild” by Leif Reigstad in Texas Monthly.

Cage will play Joe Exotic in a story that focuses on him trying to keep his zoo at all costs, even his own sanity. It will be based on the real-life story of the enigmatic subject of “Tiger King” and explain how he became lost in a public persona of his own making.

A pair of YouTubers got Carole Baskin to do an interview by using audio clips from Jimmy Fallon interviews.

The outlet notes that this will mark Cage’s first-ever foray into the world of television, having previously won an Academy Award for his role in “Leaving Las Vegas” and earned similar acclaim throughout his storied film career.

Unfortunately for Cage, he was not on the real-life Joe Exotic’s shortlist of actors to portray him in film or TV.

“He would like Brad Pitt or David Spade to play him," Rebecca Chaiklin, one of the filmmakers behind "Tiger King," previously told The Hollywood Reporter. "He doesn’t refer to David Spade as David Spade -- he refers to him as 'Joe Dirt.'"

This isn’t the only scripted series based on the world of Joe Exotic that’s currently in development. Deadline previously reported that Emmy-winning “Saturday Night Live” alum Kate McKinnon is set to star in a different limited TV series in development at UCP based on the podcast “Over My Dead Body” from Wondery, which covered Joe’s story in-depth in Season 2. McKinnon is set to star as Baskin, Joe’s real-life arch-rival.