A giant Ukrainian flag is flying high above First Texas Honda on Steck Avenue in Austin.

AUSTIN, Texas - Driving up Mopac in North Austin, you can’t help but notice the huge Ukrainian flag waving in the wind.

"We saw the flag. We knew instantly it was for Ukraine, and we were thrilled to see folks honoring them that way," said Ann Denkler of Austin.

"It’s easy to be caught up with what you’re doing every day and just not think about stuff, and so, I think reminders like that are a good thing," said John Boriack of Austin.

Drive toward it, and you’ll find it’s flying at First Texas Honda on Steck Avenue.

"And so, you know, we can halfway around the world say, what can we do?" said Continental Automotive Group owner Will Hardeman.

Hardeman says they just put up the flag on Tuesday. It’s 60 by 30 feet.

"I think we have the largest flagpole in Austin," said Hardeman. "And so we said—you know what, this would be a novel way to kind of just do one more thing to show our support—and maybe start to get other people interested in the relief effort." 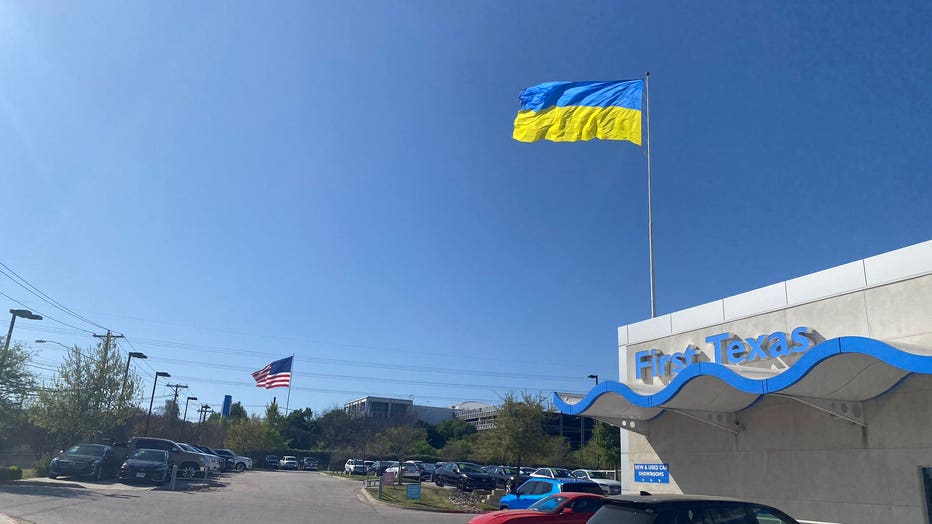 But it’s not just a symbol. Before the flag even went up, the dealership donated $100,000 to help Ukraine’s refugees, through Ascend Mission Fund’s Ukraine Relief Network.

Hardeman says they’ll be doing their part, including keeping the flag up until there’s peace.

"As long as this war drags on and there's controversy, we want to make sure that that our stance is known that we support Ukraine over Russia," said Hardeman.

For people driving by, the flag is a reminder that from big donations to small gestures, everybody can do something.

Delivering help, and hope, a world away.

"I actually was about to take a photo of it and post it on my Instagram page, and there are some Ukrainian people I connected with. And so I thought I would say "love from Austin,’" said Boriack.