SEOUL, South Korea - North Korea said Wednesday it successfully tested a new hypersonic missile it implied was being developed as nuclear-capable as it continues to expand its military capabilities while pressuring Washington and Seoul over long-stalled negotiations over its nuclear weapons.

The North’s official Korean Central News Agency said the missile during its first flight test on Tuesday met key technical requirements set out by defense scientists, including launch stability and the maneuverability and gliding flight characteristics of the "detached hypersonic gliding warhead." State media released a photo of a missile mounted with a finned, cone-shaped payload soaring into the air while leaving a trail of bright orange flames.

The latest launch, which came after two rounds of missile tests this month, was shortly before North Korea’s U.N. envoy accused the United States of hostility and demanded the Biden administration permanently end joint military exercises with rival South Korea and the deployment of strategic assets in the region. The North has also offered to improve relations with the South if certain conditions are met, apparently returning to its pattern of mixing weapons demonstrations with peace overtures to wrest outside concessions.

The North’s announcement came a day after the South Korean and Japanese militaries said they detected North Korea firing a ballistic missile into the sea. The U.S. Indo-Pacific Command said the launch didn’t pose an immediate threat but highlighted "the destabilizing impact of (North Korea’s) illicit weapons program. 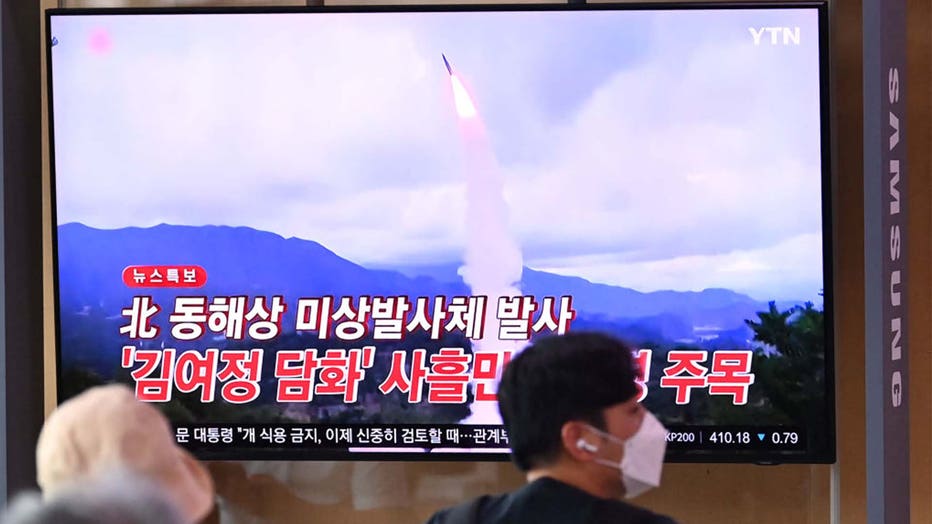 FILE - People watch a television news broadcast showing file footage of a North Korean missile test, at a railway station in Seoul on Sept. 28, 2021, after North Korea fired an 'unidentified projectile' into the sea off its east coast according to th

Nuclear negotiations have stalled since the collapse of a meeting between North Korean leader Kim Jong Un and former U.S. President Donald Trump in February 2019, when the Americans rejected the North’s demands for a major removal of U.S.-led sanctions over its nuclear weapons program in exchange for dismantling an aging nuclear facility. That would have amounted to only a partial surrender of its nuclear capabilities.

Kim in recent political speeches has vowed to bolster his nuclear deterrent in face of U.S. pressure. His government has so far rejected the Biden administration’s offer to resume talks without preconditions, saying that Washington must abandon its "hostile policy" first, a term North Korea mainly uses to refer to U.S.-led sanctions over its nuclear weapons program and the joint U.S.-South Korea military drills.

Hypersonic glide vehicles, which are launched from a rocket before gliding into a target, were among a wish-list of sophisticated military assets Kim issued during a ruling party meeting in January. He has also called for more longer-range intercontinental ballistic missiles, nuclear-powered submarines, and tactical nuclear arms.

The KCNA described the new missile as an important addition to the country’s "strategic" weaponry, implying that the system is being developed to deliver nuclear weapons. The agency also said the test confirmed the stability of the missile’s "fuel ampoule," indicating a technology to pre-fuel the liquid propellant missile and seal it in a canister so that it could stay launch-ready for years.

Pak Jong Chon, a senior official who observed the test, said the North plans to expand the ampoule system to all of its liquid-fuel missiles. Kim Dong-yub, a professor at the University of North Korean Studies in Seoul, said North Korea is trying to improve the mobility of its liquid-fuel missiles. These weapons have been seen as more vulnerable than solid-fuel missiles because they need to be fueled separately and transported to launch sites using trucks that can be seen by enemy satellites or other military assets.

The North’s latest launch came after Kim Yo Jong, the influential sister of Kim Jong Un, reached out to Seoul twice on Friday and Saturday, saying her country was open to resuming talks and reconciliatory steps if conditions are met. She criticized Seoul for calling Pyongyang’s previous missile tests a provocation and demanded it abandon "unfair double-dealing standards" and "hostile policies."

Her overture came after the North tested a new cruise missile it intends to arm with nuclear warheads and fired ballistic missiles from a train, experimenting with a new launch platform. Those launches demonstrated North Korea’s ability to attack targets in South Korea and Japan, both key U.S. allies where a total of 80,000 American troops are stationed.

Analysts say North Korea is using the South’s desire for inter-Korean engagement to pressure Seoul to extract concessions from the Biden administration on his behalf as he renews an attempt to leverage his nuclear weapons for badly needed economic benefits.

North Korea’s weapons displays could also be aimed at shoring up domestic unity as Kim Jong Un faces perhaps his toughest moment nearing a decade in rule, with pandemic border closures unleashing further shock on an economy battered by sanctions and decades of mismanagement.

Experts say the North will likely continue its testing activity in the coming months as it gradually dials up its pressure campaign, at least until China begins pushing for calm ahead of the Beijing Winter Olympics early next year.