More than half a million Texans living in coastal communities were ordered to leave their homes and businesses because of hurricane and storm surge warnings.

MESQUITE, Texas - Some of the people evacuating from the Gulf Coast ahead of Hurricane Laura have made their way to North Texas for shelter.

Hurricane Laura is already a Category 3 storm with sustained winds up to 115 mph and is expected to strengthen to a Category 4 storm with the potential for 15-foot storm surges before it makes landfall.

Buses with evacuees began arriving at the Mesquite Reception Center on Interstate 20 around 6 a.m. Wednesday morning.

Some of the people evacuating from the Gulf Coast ahead of Hurricane Laura have made their way to North Texas for shelter.

The Mesquite facility served as a shelter during Hurricane Katrina, Ike and Harvey. But this time because of the pandemic, it is just a welcome area. Evacuees are checking in, getting some food and then are being sent to a hotel.

State officials say the Mesquite location is set up to receive people coming in on the state-ordered buses. They’re asking people evacuating in their own personal vehicles to go to other sites in Ennis, Austin and San Antonio.

More than half a million Texans living in coastal communities were ordered to leave their homes and businesses because of hurricane and storm surge warnings.

The state provided hundreds of buses to take the evacuees to San Antonio, Austin and North Texas. 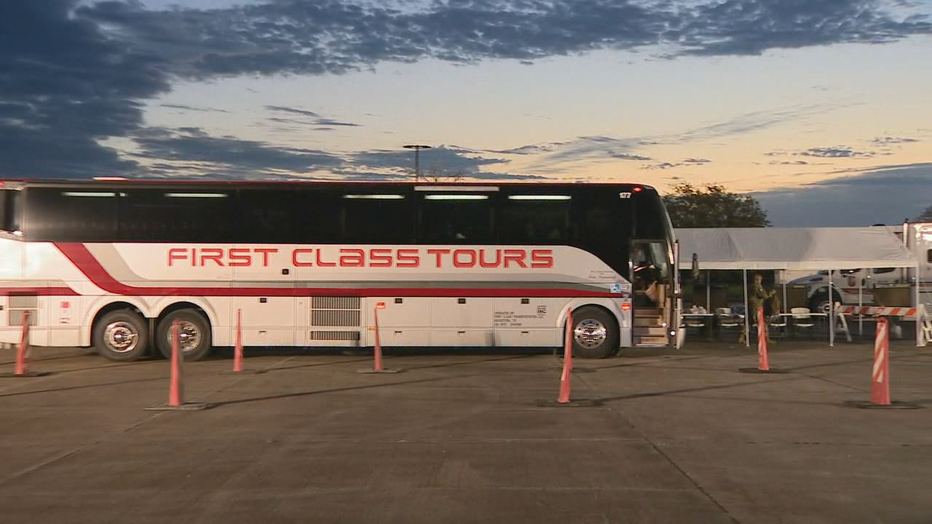 Each bus is limited to about 20 people and is equipped with masks, disinfectant and personal protective equipment.

SKY4 was over one of the receiving centers in Mesquite Wednesday evening, as there was a long line of cars filled with people who were still seeking shelter.

After the evacuees arrive either in Mesquite or at the Ellis County Knights of Columbus Hall in Ennis, they are being taken to hotels in Dallas and Tarrant counties.

Hotels in Farmers Branch, Fort Worth, Irving, and Richardson are contracting with local cities and the state to provide rooms for evacuees.

When they get there, Dallas-Fire Rescue crews take their temperature and offer a COVID-19 symptom check.

They are given three meals a day and are encouraged to wear masks when leaving their rooms.

A spokesperson for the city of Dallas said they can stay there as long as needed during this hurricane.

Dallas County is prepared for about 500 people. Free COVID-19 tests are available to them but not required to receive shelter.

“Dallas hotels are filling up extremely fast. We have thousands of people who have evacuated and are driving up,” Dallas Director of Emergency Management Rocky Vaz said.

Officials shared that Dallas has already processed about 200 evacuees, and has contracted with the Wyndham Hotel in Farmers Branch to provide 285 rooms, and they’re working to contract with more.

There were 92 of those rooms that were occupied as of Wednesday afternoon.

Kevin Dodson secured one of those rooms. He couldn’t contain his feeling of relief.

Dallas would typically open the convention center as a shelter, but not this year because of the pandemic.

The Red Cross has opened a shelter off I-45 in Ennis, offering much-needed refuge to some.

“As the community sees the need to open a shelter, we will support them, sending in PPE, and as soon as practical, we’ll get testing teams in there as well,” said Nim Kidd, Chief of Texas Division of Emergency Management. “Our goal is no loss of life, our goal is evacuation not rescue, and then a rapid clean up and recovery,” Kidd said.

Families from the Beaumont and Port Arthur area are leaving in droves and driving for hours north to get to safety in the DFW area. 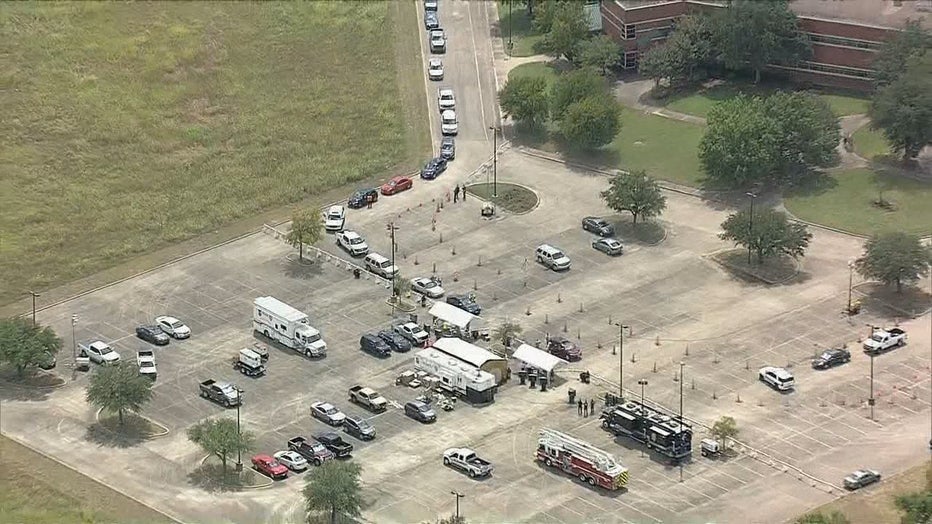 “I know for sure Beaumont can’t hold water at all,” said Ossie Smith, who is evacuating from Beaumont. “Last time we had got hit by a hurricane, it was nasty so I decided to take my family and get up on out of here.”

Others found out after the long drive to Mesquite that they would have to wait as the city worked to find available hotel rooms.

“We’re out here homeless because it was mandatory,” said Lynette Conner, who is evacuating from Jasper. “We didn’t just decide we wanted to leave and leave ourselves. It was a mandatory evacuation so we had to come. And now we’re here, and we don’t have any kind of… we’re just kind of stuck.”

Many evacuees, like Jack Long and his wife, ended up at the evacuation center in Ennis after first driving to Huntsville and Conroe with no luck finding shelter.

“He said the closest one would be in Ennis, Texas, so we wound up coming here,” Long said. “Thank the Lord we found y’all because it’s going to be a bad one down there.”

Many evacuees say they learned a lesson after riding out Hurricane Harvey and decided to evacuate for this hurricane.

“I was a Harvey victim,” said Sanders Tolk III. “I just got back in my house two weeks ago from Hurricane Harvey. I had been doing the repairs and everything else.”

People are choosing instead to see what kind of shelter they could find in North Texas and praying for loved ones still in the affected areas.

Arthur Washington left Beaumont with his family of eight.

“I would’ve stayed but I gotta get my kids out of there, so we just left,” Washington said. “I been through Hurricane Katrina in New Orleans and then Harvey three years ago.”

“We still rebuilding from Hurricane Harvey, so we know the dangers of it all,” Tammy Washington added.

State officials said Hurricane Laura could be out of Texas as soon as late Thursday.

City officials in Mesquite say they do not have the capability to accept any kind of donations there.

However, officials in Ennis say they’re seeing a need mostly for gas cards. Anyone who wants to help can call their evacuation center hotline at (972) 695-3524.

Dallas officials said they do not need donations right now, but Dallas Animal Services is asking people to help support displaced pets by fostering or adopting a pet.

Hurricane Laura is now a major hurricane and has prompted hundreds of thousands of Texans to leave the Gulf Coast. Many of them are now arriving in North Texas.