A nun knelt and prayed with police in Myitkyina, Myanmar, on March 8, imploring them to stop shooting at protesters. (Credit: Myitkyina News Journal via Storyful)

On Monday, the nun dropped to her knees in the streets of Myitkyina and pleaded with police officers to stop firing their weapons at protestors. According to Reuters, she begged police to treat protesters "kindly like family members."

"I told them that they can kill me, I am not standing up until they give their promise that they will not brutally crack down on protesters," Tawng explained.

Video shows two officers joining Tawng on their knees, their hands together symbolizing prayer. Tawng said she received assurances from senior officers that they were just clearing the road.

Ultimately, the gesture failed to generate the peace Tawng pleaded for. Shortly after she and another officer touched their foreheads to the ground, shots rang out nearby, filling those same streets with blood.

"We heard loud gunshots, and saw that a young kid’s head had exploded, and there was a river of blood on the street," Tawng said.

Tawng, who runs a clinic in Myitkyina, said at least two protesters were killed. As she tried to bring some of the victims to her clinic, she became blinded by tear gas, Reuters reported. 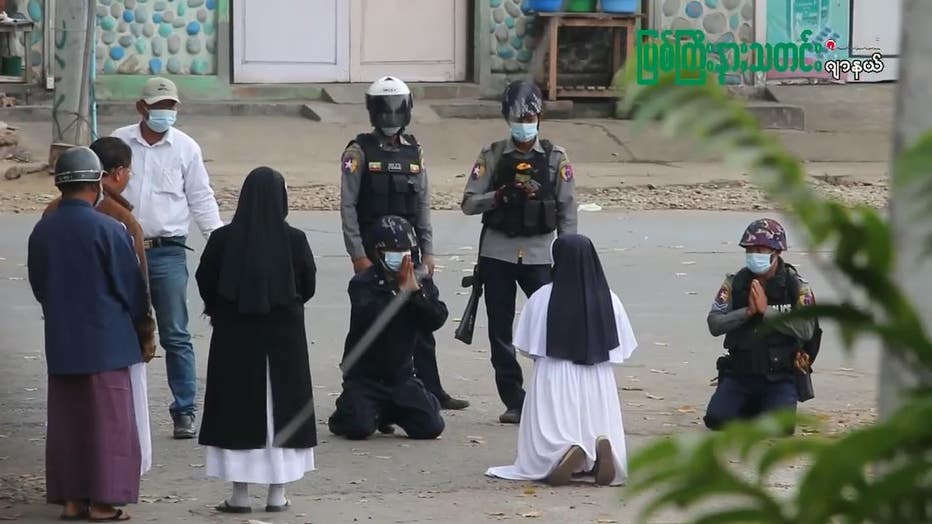 A nun knelt and prayed with police in Myitkyina, Myanmar, on March 8, imploring them to stop shooting at protesters. (Credit: Myitkyina News Journal via Storyful)

"Our clinic floor became a sea of blood," she said. "We need to value life. It made me feel so sad."

Myanmar has been roiled by protests and other acts of civil disobedience since the Feb. 1 coup that toppled elected leader Aung San Suu Kyi’s government just as it was to start its second term. The coup reversed years of slow progress toward democracy in the Southeast Asian nation after five decades of military rule.

Security forces have responded with mass arrests and at times lethal force. At least 60 protesters have reportedly been killed since the military takeover and more than 1,900 people have been arrested.