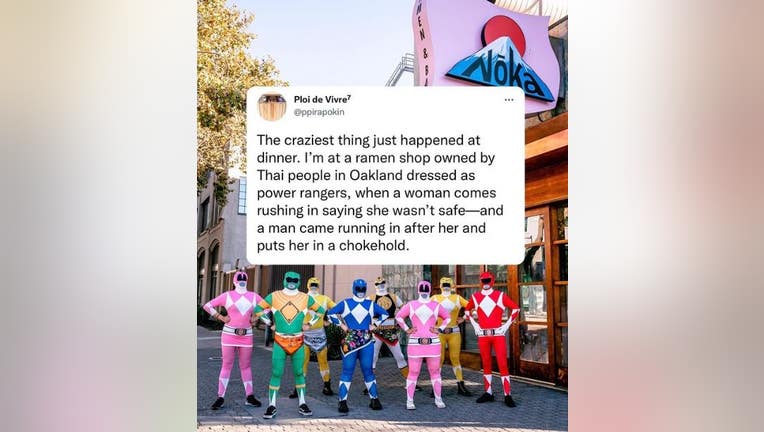 A woman detailed on Twitter how employees at an Oakland ramen shop stopped an alleged assaults. The photo is courtesy of Noka Ramen.

Power Rangers was undoubtedly one of the best live-action superhero series in the 90s.

The squad was in true form Friday as they took down an alleged assailant at an Oakland Ramen shop.

At the newly-opened Noka Ramen shop located at 90 Franklin Street in Jack London Square, employees dress up in Power Ranger suits on Fridays to heighten the experience of ordering the Noka Ranger cocktail inspired by the series, as mentioned by SFGate.

Those Power Ranger suits apparently came with some real superhero powers as the employees kicked into action to help a woman who was being attacked. Restaurant patrons are also credited with helping.

The saga was detailed in a series of tweets by writer Ploi Pirapokin (@ppirapokin), who witnessed it firsthand as she was dining at the ramen house.

"Once the woman had expressed she wasn’t safe, and she didn’t want to go home with this man who was choke holding her, the black power ranger (the manager with a kickass bob) and the yellow ranger, told the man to leave," Pirapokin wrote.

'A city of chaos': Cotopaxi closes only SF store after repeated break-ins

The alleged assailant was ready for a fight.

Pirapokin said the man swung at the employees.

The Power Rangers determined it would be best to hide the woman in the kitchen.

The Yellow Ranger grabbed the attacker by the collar and dragged him, out the restaurant.

Pirapokin wrote that the assailant began yelling racial slurs at the employees before the Yellow Ranger took him by the collar and dragged him out of the restaurant.

Outside the man started grabbing chair and salt and pepper shakers to throw at the windows, Pirapokin said.

Seeing that he was outnumbered, the man went and got back up.

"Man comes back with a friend (or another person bugging on the street) to try & fight the power rangers," Pirapokin tweeted. She added "More swings are swung, more power rangers pile onto the men at the door to lock them out. Locking us in."

Pirapokin said the police were called and officers eventually arrived to the scene.

Noka Ramen confirmed the incident in a social media post.

"Our NōKA Rangers were real life heroes last night," the ramen shop said. "Like our heroic namesakes, it’s not just the powers and costumes that give us strength. It’s who and what we are inside that empowers us."

Noka Ramen said it is fully cooperating with the police investigation in identifying the alleged attacker.