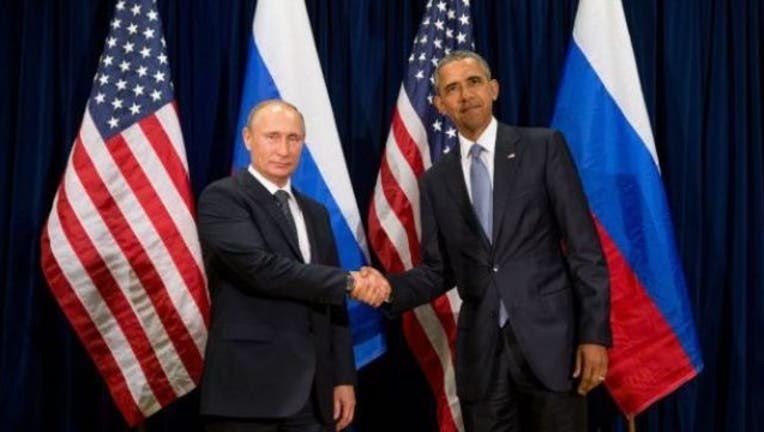 UNITED NATIONS (AP) — U.S. President Barack Obama and Russian President Vladimir Putin sharply disagreed Monday over the chaos in Syria, with Obama urging a political transition to replace the Syrian president but Putin warning it would be a mistake to abandon the current government.

After dueling speeches at the United Nations General Assembly, Obama and Putin also met privately for 90 minutes — their first face-to-face encounter in nearly a year.

At the heart of their dispute over Syria is the fate of embattled Syrian leader Bashar Assad, a Russian ally. The U.S. has long called for Assad to leave power, while Russia has cast the Syrian government as the only viable option for confronting the Islamic State, a militant group that has taken advantage of the vacuum created by the civil war.

During his address to the UN, Obama declared, "We must recognize that there cannot be, after so much bloodshed, so much carnage, a return to the prewar status quo."

Putin, speaking shortly after the U.S. president, urged the world to stick with Assad.

"We believe it's a huge mistake to refuse to cooperate with the Syrian authorities, with the government forces, those who are bravely fighting terror face-to-face," Putin said during his first appearance at the U.N. gathering in a decade.

Obama and Putin's disparate views of the grim situation in Syria left little indication of how the two countries might work together to end a conflict that has killed more than 250,000 people and resulted in a flood of refugees. Indeed, the leaders' private meetings ended with vague statements about the need for a political resolution to the crisis, but no clear pathway for making that happen.

The crisis has taken on fresh urgency amid Russia's recent military buildup in Syria. Putin has cast the increased presence of equipment and troops in Syria as part of the effort to defeat the Islamic State, and suggested Monday that Russia could launch airstrikes against the militants.

"We are thinking about it and don't exclude anything," he said.

It's unlikely Putin would join the U.S.-led coalition already launching strikes against the militants. He said Russia will only take such a step in accordance with international law, and criticized the U.S. and its allies for striking the Syrian territory without U.N. permission.

The Syria crisis largely overshadowed the summit's other discussions on peacekeeping, climate change and global poverty.

French President Francois Hollande backed Obama's call for Assad's ouster, saying "nobody can imagine" a political solution in Syria if he is still in power. Hollande called on countries with influence in Syria, including Gulf nations and Iran, to be engaged in a transition.

However, Iran — which along with Russia is a strong backer of Assad — said the Syrian president must remain in power to fight extremists. Iranian President Hassan Rouhani said that while Syria's government needs reform, the country will fall to the Islamic State if the international community makes getting rid of Assad its top goal.

Despite Obama's staunch opposition to Assad remaining in office, the U.S. has struggled to push him from power. Russia has long been a major obstacle, shielding Assad from U.N. sanctions and continuing to provide the Syrian government with weapons.

In fact, Russia has appeared to deepen its support for Assad in recent weeks, sending additional military equipment and troops with the justification that it is helping the government fight the Islamic State. The military buildup has confounded U.S. officials, who spent the summer hoping Russia's patience with Assad was waning and political negotiations could be started.

Obama and Putin each framed his case for Syria's future in the context of a broader approach to the world, launching veiled criticisms at each other.

The U.S. president condemned nations that believe "might makes right," and sought instead to highlight the benefits of diplomacy. He touted his administration's efforts to restore ties with Cuba after a half-century freeze and the completion of a nuclear accord with Iran, noting that Russia was a key partner in negotiating the Iran deal.

Putin, without naming the United States, accused Washington of trying to enforce its will on others and mulling a possible reform of the U.N., which he suggested stands in the way of the perceived U.S. domination.

"After the end of the Cold War, the single center of domination has emerged in the world," Putin said. "Those who have found themselves on top of that pyramid were tempted to think that since they are so strong and singular, they know what to do better than others and it's unnecessary to pay any attention to the U.N."

Obama and Putin briefly shook hands during a leaders' lunch that followed the morning of speeches. Seated at the same table, they clinked glasses during a toast, with Putin smiling and Obama grim-faced.

The leaders have long had a strained relationship, with ties deteriorating to post-Cold War lows after Russia annexed Crimea from Ukraine and allegedly backed rebels in Ukraine's east. The U.S. has sought to punish Russia through economic sanctions.

U.S. officials said the situation in Ukraine consumed about half of Obama's meeting with Putin. The White House is worried pro-Russian separatists in eastern Ukraine could hold local elections next month that violate a fragile peace plan, and officials said Obama urged Putin to help keep the accord on track.

The peace deal was brokered in February by France and Germany, and Russia doesn't want the United States to become engaged in those talks. Putin, however, sought to downplay any differences with the U.S. on Ukraine following his meeting with Obama, saying that Washington was working with the Ukrainians and the Europeans to maintain diplomatic contacts with Russia to help with a settlement.