Officers who defended the U.S. Capitol on Jan. 6, 2021, from supporters of then-President Donald Trump in a brutal attack were honored with Congressional Gold Medals on Dec. 6, 2022.

WASHINGTON - Law enforcement officers who defended the U.S. Capitol on Jan. 6, 2021 were honored Tuesday with Congressional Gold Medals, praised as "heroes" for securing democracy when they fought off a brutal and bloody attack by supporters of then-President Donald Trump.

"January 6 was a day of horror and heartbreak; it is also a moment of extraordinary heroism —staring down deadly violence and despicable bigotry," Pelosi said. 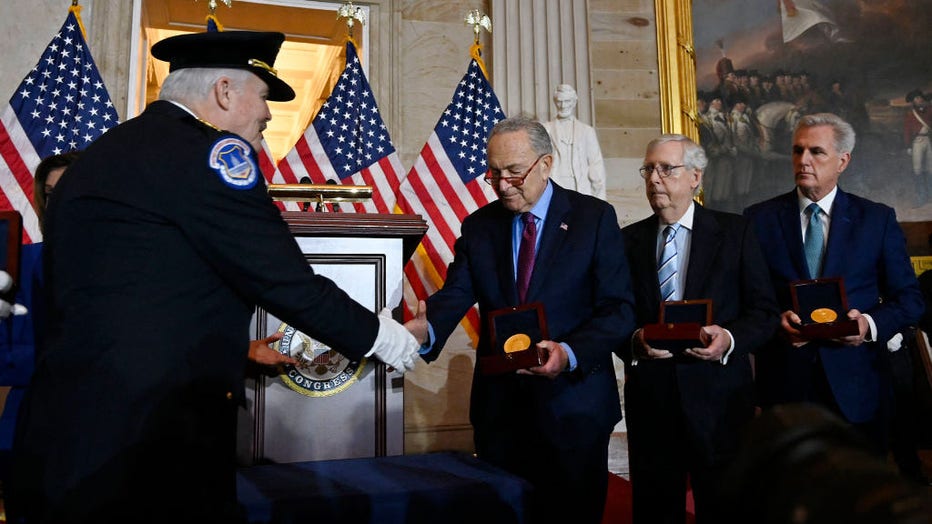 In bestowing Congress' highest honor, Pelosi praised the heroes for "courageously answering the call to defend our democracy in one of the nation’s darkest hours."

But showing the raw political and emotional fallout from the insurrection and its aftermath, representatives of one of the medal recipients — the family of fallen officer Brian Sicknick — declined to shake hands with the Republican leaders, snubbing McConnell's outstretched palm.

To recognize the hundreds of officers who were at the Capitol on Jan. 6, the medals will be placed in four locations — at U.S. Capitol Police headquarters, the Metropolitan Police Department, the Capitol and the Smithsonian Institution. In signing the legislation last year, Biden said that one will be placed at the Smithsonian museum "so all visitors can understand what happened that day."

Metropolitan Police Chief Robert Contee said for some officers Tuesday was their first time visiting the Capitol since that horrific day, a scene filled with the clanking sound of metal steel flag poles being wielded as weapons, "the air still thick" with chemical sprays as officers were assaulted by the mob of Trump supporters.

"Many of us still carry the mental, physical and emotional scars," Contee said.

"It was your blood, your sweat and your tears that marked these grounds," he said. 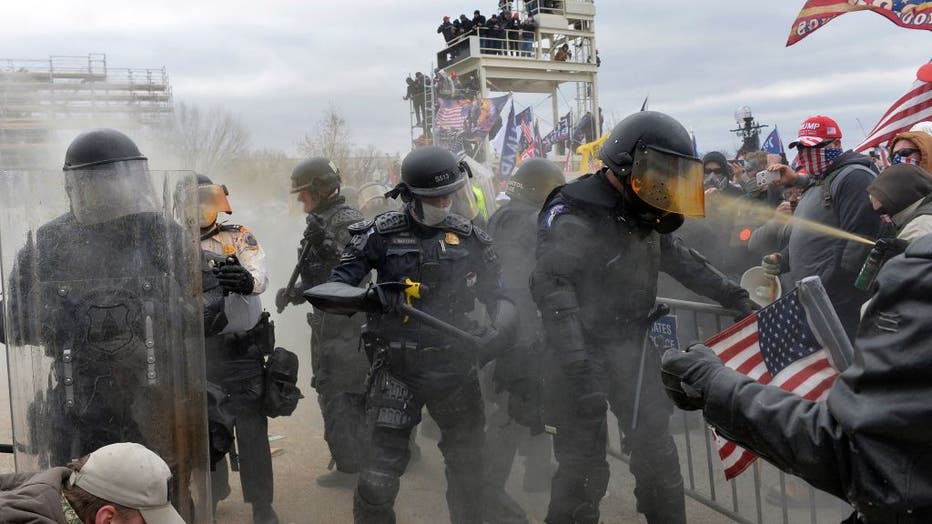 Trump supporters clash with police and security forces as they try to storm the US Capitol in Washington, DC on January 6, 2021. (Photo by JOSEPH PREZIOSO/AFP via Getty Images)

Contee said the medal for the city's police officers who rushed to help their Capitol Police allies defend the dome that day was symbolic of their "contributions not just to Washington, D.C., but to the entire country on Jan. 6."

U.S. Capitol Police Chief Thomas Manger called it "a day unlike any other in our nation’s history. And for us. It was a day defined by chaos, courage and tragic loss."

The ceremony at the Capitol comes as Democrats, just weeks away from losing their House majority, race to finish a nearly 18-month investigation of the insurrection. 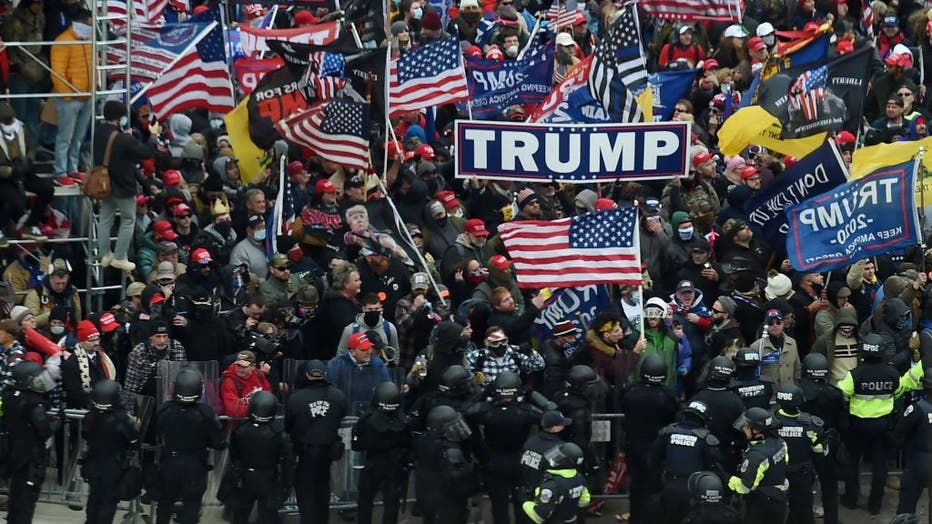 Police hold back supporters of US President Donald Trump as they gather outside the US Capitol's Rotunda on Jan. 6, 2021, in Washington, D.C. (Photo by OLIVIER DOULIERY/AFP via Getty Images)

Without support from GOP leadership, Democrats and just two Republicans have led the probe and vowed to uncover the details of the attack, which came as Trump tried to overturn his election defeat and encouraged his supporters to "fight like hell" in a rally just before the congressional certification.

Awarding the medals is among Pelosi’s last ceremonial acts as she prepares to step down from leadership. When the bill passed the House more than a year ago, she said the law enforcement officers from across the city defended the Capitol because they were "the type of Americans who heard the call to serve and answered it, putting country above self."

Dozens of the officers who fought off the rioters sustained serious injuries. As the mob of Trump’s supporters pushed past them and into the Capitol, police were beaten with American flags and their own guns, dragged down stairs, sprayed with chemicals and trampled and crushed by the crowd. Officers suffered physical wounds, including brain injuries and others with lifelong effects, and many struggled to work afterward because they were so traumatized.

New video of the Capitol Riot, including alleged crimes by the Proud Boys and others, shown at the congressional hearing on June 9. This version includes some censored profanity.

Four officers who testified at a House hearing last year spoke openly about the lasting mental and physical scars, and some detailed near-death experiences.

Metropolitan Police Officer Daniel Hodges described foaming at the mouth, bleeding and screaming as the rioters tried to gouge out his eye and crush him between two heavy doors. Metropolitan Police Officer Michael Fanone, who rushed to the scene, said he was "grabbed, beaten, tased, all while being called a traitor to my country." Capitol Police Officer Harry Dunn said a large group of people shouted the N-word at him as he was trying to keep them from breaching the House chamber.

At least nine people who were at the Capitol that day died during and after the rioting, including a woman who was shot and killed by police as she tried to break into the House chamber and three other Trump supporters who suffered medical emergencies. Two police officers died by suicide in the days that immediately followed, and a third officer, Sicknick, collapsed and later died after one of the rioters sprayed him with a chemical. A medical examiner determined he died of natural causes.

Suicide of US Capitol Police officer who responded to Jan. 6 riot to be considered line of duty death 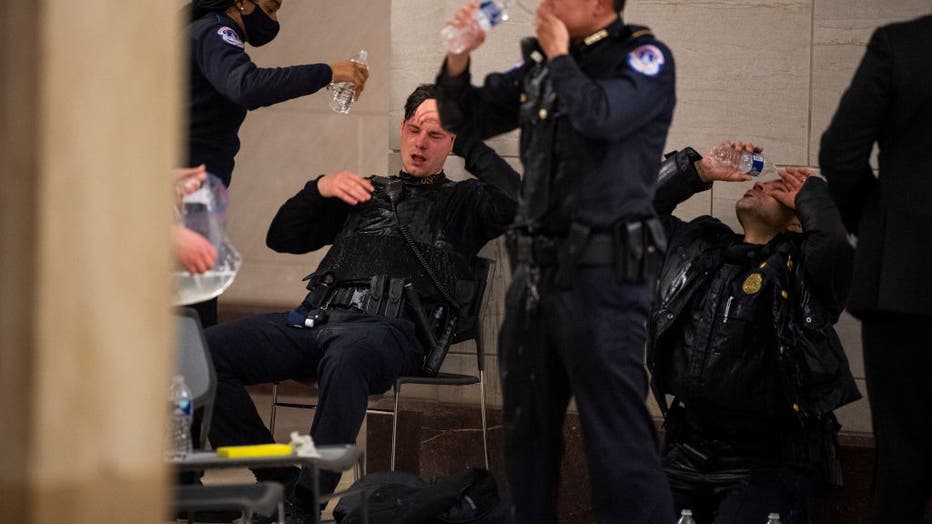 Several months after the attack, in August 2021, the Metropolitan Police announced that two more of their officers who had responded to the insurrection had died by suicide. The circumstances that led to their deaths were unknown.

The June 2021 House vote to award the medals won widespread support from both parties. But 21 House Republicans voted against it — lawmakers who had downplayed the violence and stayed loyal to Trump. The Senate passed the legislation by voice vote, with no Republican objections.

Gripping new evidence during the January 6 hearings detailed how the mob that stormed the Capitol came within 40 feet of where Pence and his team were sheltering, highlighting the danger Trump had put him in.

The Congressional Gold Medal, the highest honor Congress can bestow, has been handed out since 1776. Previous recipients include George Washington, Sir Winston Churchill, Bob Hope and Robert Frost. In recent years, Congress has awarded the medals to former New Orleans Saints player Steve Gleason, who became a leading advocate for people struggling with Lou Gehrig’s disease, and biker Greg LeMond. 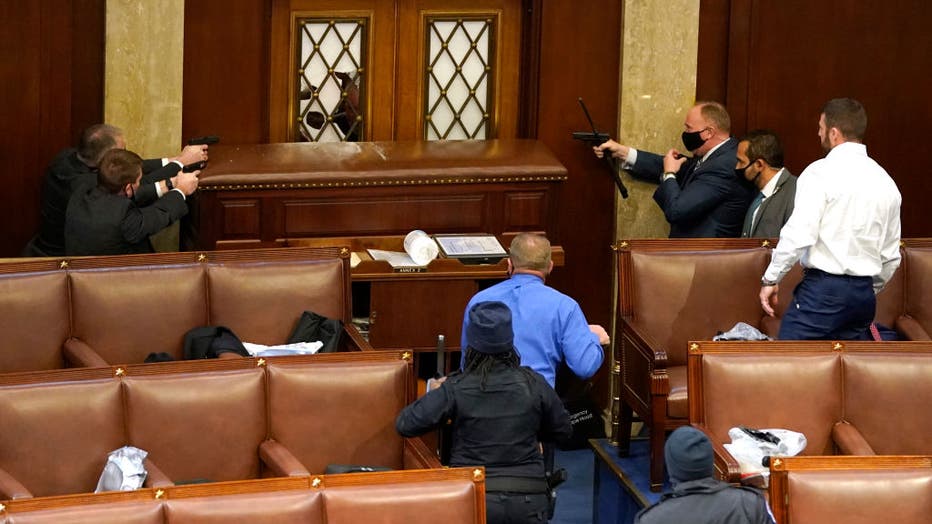 U.S. Capitol police officers point their guns at a door that was vandalized in the House Chamber during a joint session of Congress on Jan. 6, 2021, in Washington, DC. (Photo by Drew Angerer/Getty Images)

The insurrection was a "violent attempt to overturn the will of the American people," and Americans have to understand what happened, he said. "The honest and unvarnished truth. We have to face it."