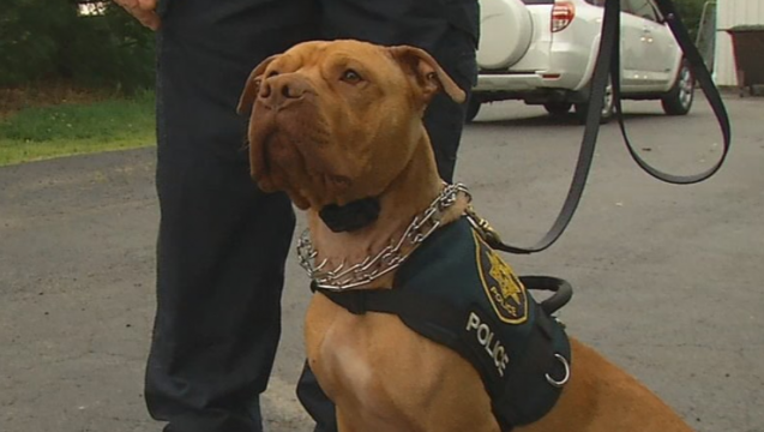 Leonard, the pit bull, was set to be euthanized at a Marysville, Ohio, shelter but will now be the first K9 for the Clay Township Police Department. (Fox 28)

(FoxNews.com) - A dog that was set to be euthanized has become a police dog for an Ohio police department.

The dog, Leonard, 2, is the first pit bull to be certified for police employment in Ohio, according to Fox 28. Leonard is slated to begin his full-time job on Saturday at the Clay Township Police Department. He will also be the township’s first K-9.

Leonard was set to be euthanized at the Union County Humane Society in Marysville. The shelter’s director Jim Alloway said the staff found the dog to be aggressive and would have had a hard time being adopted, according to the The Blade.

Alloway, who has a background with police dogs, believed Leonard could be a well-suited as a police dog. When Leonard would see someone carrying something, he would attempt to grab it, Alloway noted.

“For the average home, that’s a big problem,” said Alloway. “But it’s great for law enforcement.”

Alloway communicated with the Storm Dog K9 Training in Sunbury, Ohio, who were at first skeptical because they had never trained a pit bull before. But they ultimately agreed to train Leonard to sniff out drug odors.

“He has quite the work ethic,” said Krishea Osborne, Storm Dog’s director of training for law enforcement. “He’s got so much play and drive and hunt that he’s a great police dog.”

Terry Mitchell, the chief of Clay Township Police Department, and Leonard will be partners. Chief Mitchell and Leonard have been training together for a few weeks, and the dog now lives with the officer at his home.

“Now he’s our bud,” Chief Mitchell said. “Everyone on the department loves him. It’s been nothing but good.”