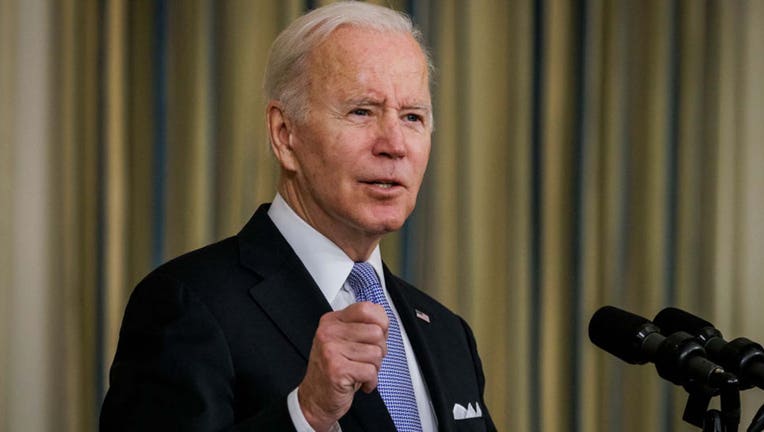 FILE - U.S. President Joe Biden speaks during a press conference in the State Dining Room at the White House on Nov. 6, 2021.

FOX NEWS - As the omicron variant of the coronavirus is poised to become the new leading variant in the United States, many schools and businesses are closing their doors over what President Biden is predicting to be a winter of "severe illness and death."

Across the country, schools are beginning to shift to remote learning, restaurants are closing their doors to the public, and events are once again being canceled as a result of the new omicron variant of the coronavirus.

Georgetown University, for example, is restricting all indoor campus dining to a "grab-and-go" model, where students pick up their food in a dining hall and eat in their private room. The university is also closing fitness centers, and has canceled all events if they cannot be held outdoors or online.

Public schools across the country are announcing shifts to remote learning as well. On Friday, the Prince George’s County Public Schools near Washington, D.C., announced that students will shift to virtual learning until mid-January, citing a "stark rise" in coronavirus cases.

Officials with Georgia's Clayton County Public Schools said due to staffing shortages, a shift to remote learning was made for Thursday and Friday.

Evanston Township High School in Illinois announced an "adaptive pause" from Dec. 17 through Dec. 23 and all students will "transition to e-learning during this period," according to an announcement by the school. The school also canceled all field trips and non-essential events.

In New York, Oswego City School District announced they would be will be moving to virtual instruction from Dec. 17 through Dec. 23 due to "rapid spread of COVID-19."

The disruptions are not limited to schools, as many restaurants and businesses are also making changes due to the omicron variant.

Nite Nite, a bar and restaurant in New York City closed their doors on Dec. 17 due to a surge in coronavirus cases, then announced on Saturday that the establishment would remain closed until Dec. 28, but did not disclose if the closure was due to a rise in cases.

Another restaurant in New York City, Cozy Royale, closed for a short period of time due to coronavirus exposures within their staff.

Maketto, a Taiwanese and Cambodian restaurant in Washington, D.C. decided to close their doors for the rest of the year, announcing in an Instagram post that they will re-open in 2022.

Due to "increasing challenges" stemming from the pandemic, the Rockettes decided to cancel their "Christmas Spectacular" shows for the rest of the year.

Meanwhile, audience members settled in to watch "Moulin Rouge!" at the Al Hirschfeld Theater Thursday night when an announcement informed them that a "late-in-the-day" positive test would force the company to cancel the show, the Daily Voice reported.

Saturday Night Live announced just hours before its final show of the year it would not have a studio audience and would go on with "limited cast and crew."

The new omicron variant and a number of football players testing positive for the coronavirus have also forced the National Football League to make several operational changes, including postponing multiple games. Because of this, games are now scheduled throughout the week.