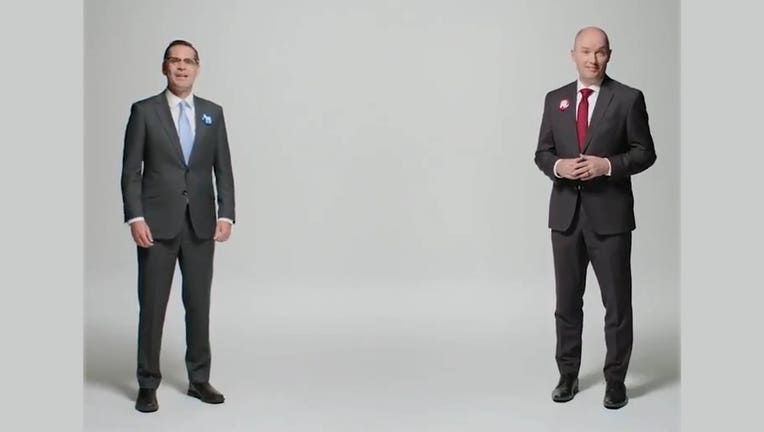 SALT LAKE CITY - Opponents in the Utah governor’s race released campaign ads together in an effort to promote unity and set “an example to the nation” amid a polarized 2020 election season.

In one of the public service announcements shared Oct. 2, Democratic candidate Chris Peterson and Utah Lt. Gov. Spencer Cox, a Republican, stand together in the video and promise to “work together” no matter the outcome.

“We are currently in the final days of campaigning against each other to be your next governor,” Peterson stated at the beginning of the ad.

While the candidates both expressed their will to win, Cox added that there are still “some things we both agree on.”

“We can debate issues without degrading each other’s character,” Peterson replied.

“We can disagree without hating each other,” added Cox.

The opponents called for Utah residents to “show the country that there’s a better way.”

Both candidates, who are facing off to succeed Utah Gov. Gary Herbert, concluded by stating they approve the message in unison.

Cox, who is a former mayor, county commissioner and state representative, is the heavy favorite to win the governor’s race in deeply conservative Utah, polls show. Republicans account for more than half of all registered voters in the state and outnumber Democrats by more than a three-to-one margin.

Peterson, a University of Utah law professor, is a first-time political candidate. He shared one of the ads on Twitter, calling for “civility in politics.”

“Working together and the peaceful transfer of power are integral to what it means to be American. Let's reforge our national commitment to decency and democracy,” Peterson wrote.

The unique joint messaging comes after President Donald Trump cast doubt on election results in November and previously refused to commit to a peaceful transfer of power if defeated by Democratic nominee Joe Biden.

Research has also shown a growing gap between liberals and conservatives in the country, with Pew Research calling it a “defining feature of American politics today.”

Roughly 40% of registered voters in both parties say that they do not have a single close friend who supports the other major party candidate, according to a Pew Research survey conducted in July and August. Fewer than 25% said they have more than a few friends who do.