BEIJING - The coronavirus from China continues to spread, infecting more than 40,000 people worldwide and leading to hundreds of deaths in China, and impacts beyond public health were being felt around the globe — including in the United States.

On Monday, China confirmed 908 deaths and more than 40,100 confirmed cases. More than 440 cases have been confirmed outside mainland China, where the new virus was first detected in December.

China is now the world’s second-largest economy, and experts say the coronavirus will have a larger negative effect on the global economy than the SARS outbreak in 2003.

At the time of SARS, China was the sixth-largest economy, accounting for only 4.2% of world GDP, according to data analysis firm IHS Markit. China now accounts for 16.3% of world GDP.

“Any slowdown in the Chinese economy sends not ripples but waves across the globe,” the firm said in a statement.

Chinese factories and offices have started to reopen following an extended Lunar New Year holiday, but companies are forecasting big revenue declines due to the closure of stores, amusement parks, cinemas and other businesses.

Disney said last week it could lose $175 million if its parks in Hong Kong and Shanghai remain closed for two months.

IHS Markit predicts there could also be an impact on auto sales, as 11 Chinese provinces have announced an extended holiday period during the crisis that are normally responsible for more than two thirds of vehicle production in the country.

Oxford Economics, a global economics forecasting and consulting firm, said there could be a disruption to some manufacturers in the U.S. through their supply chains. 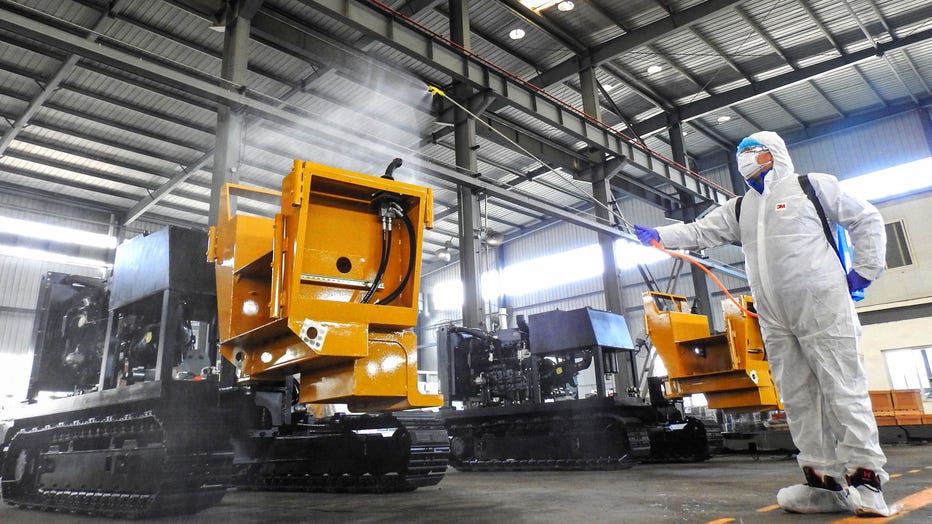 A photo taken on Feb. 9, 2020 shows a worker disinfecting machines before employees return to work from holidays at a factory in Lianyungang in China's eastern Jiangsu province. (Photo by STR/AFP via Getty Images)

“Due to China’s critical role in global supply chains, the spillovers from reduced shipments from China could be significant for global trade if component shortages trigger production to cease or slow elsewhere,” Oxford Economics predicted.

“U.S. manufacturers that produce wood and paper products, computers and electrical equipment, and transportation equipment are especially exposed because they import 30%, 25%, and 18% of their intermediate goods from China, respectively.”

When it comes to global tourism, the viral outbreak in China has also thrown the travel industry into chaos — threatening billions in losses and keeping many would-be travelers at home.

Oxford Economics is forecasting that many Chinese tourists will cancel their vacation plans to come to the U.S. in 2020, due to lockdowns of Chinese cities and the temporary suspension of flights.

“Some trips may not be re-booked later, constituting a potential permanent loss for the U.S. economy,” the firm said.

Tourist arrivals from China were predicted to fall by roughly 30 percent in 2020 from an estimated 2.9 million visitors in 2019. The Chinese also are the biggest spenders of all international travelers, spending $34.6 billion in 2018, according to data from the National Tourism and Travel Office.

Tourism Economics, a data and consulting firm, estimates that U.S. airlines will lose $1.6 billion this year because of lost business to and from China.

Carnival and Royal Caribbean have canceled around 20 China cruises between them, and many cruise lines aren't letting passengers board if they have been in China or Hong Kong in the 14 days before the ship sails.

Royal Caribbean estimates that the cancellations so far will shave about 1% off 2020 earnings, and that will double if travel restrictions in China are still in place at the end of February.

Coronavirus: What you need to know

Here are the need to know details about this virus.

But on Friday, the White House’s economic adviser said the Trump administration does not expect the outbreak in China to have a major impact on the U.S. economy as a whole.

“There’s a lot of variables involved and things we don’t know. Internally we have looked at a drop in GDP of perhaps two-tenths of 1% — that’s all we found so far,” National Economic Council Director Larry Kudlow said, according to Reuters. “Again, based on the past and based on what we’re seeing, we think it will be an absolute minimal impact.”

RELATED: As the deadly coronavirus continues to spread, at what point does it become a pandemic?