FLATONIA, Texas - Over 250 pounds of marijuana was seized during a traffic stop near Flatonia Monday.

The Fayette County Sheriff's Office says one of its sergeants and his K-9 partner stopped a Dodge pickup on I-10 at the 658-mile marker just before 10:30 a.m. for a traffic violation. 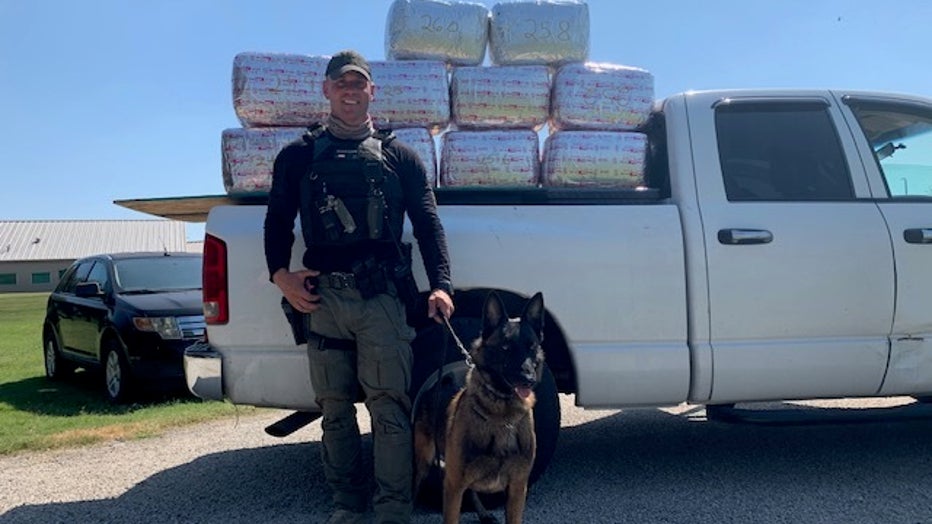 A FCSO K-9 unit stands next to a truck with pounds of marijuana. (Fayette County Sheriff's Office)

The sergeant became suspicious that illegal narcotics were being transported after speaking to the "extremely nervous" driver, says FCSO. The sergeant got consent to search the truck and had his K-9 partner conduct an exterior sweep of the truck. The K-9 alerted to the presence of illegal narcotics.

The sergeant searched the truck and found approximately 253 pounds of marijuana hidden under a load of lumber and PVC pipes. FCSO says the estimated street value of the marijuana is $126,500.

49-year-old Salvador Sanchez of Laredo was arrested for felony possession of marijuana and transported to the Dan R. Beck Justice Center.