New research suggests that more than 8 million tons of COVID-19 pandemic-related plastic waste have been generated globally, including 25,000 tons flowing into the world’s oceans.

The pandemic has led to a spike in demand for single-use plastics, which has intensified pressure on an "already-out-of-control global plastic waste problem," the authors wrote in a study published this week in the journal "PNAS."

The researchers from Nanjing University's School of Atmospheric Sciences and UC San Diego's Scripps Institution of Oceanography noted how much of the plastic waste has come from hospitals, rather than from personal protective equipment and online shopping package material. They used data from the start of the pandemic in 2020 through August 2021 and found that most of this global plastic waste entering the ocean is coming from Asia.

"When we started doing the math, we were surprised to find that the amount of medical waste was substantially larger than the amount of waste from individuals, and a lot of it was coming from Asian countries, even though that's not where most of the COVID-19 cases were," said study co-author Amina Schartup, an assistant professor at Scripps Oceanography.

Schartup added that the biggest sources of excess waste were hospitals in areas already struggling with waste management before the pandemic. 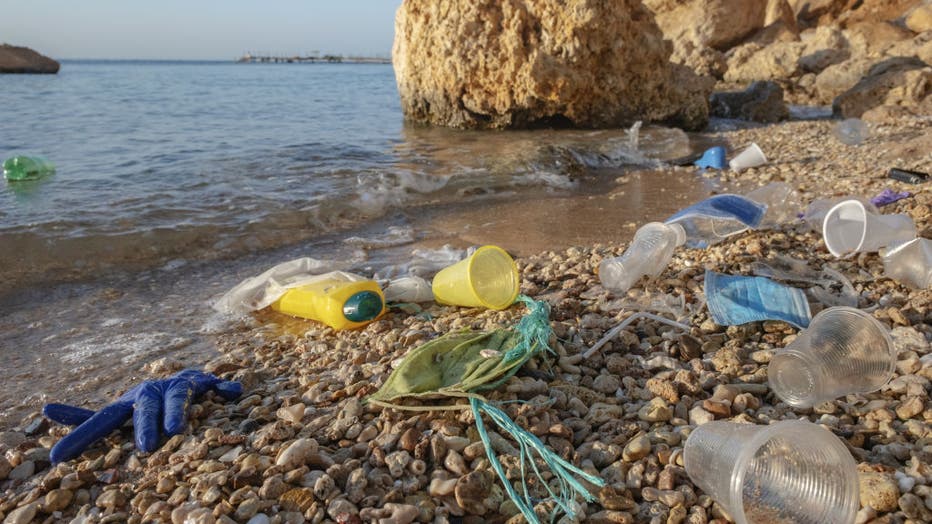 "This poses a long-lasting problem for the ocean environment and is mainly accumulated on beaches and coastal sediments," the study authors wrote while calling for "better medical waste management in pandemic epicenters, especially in developing countries."

The researchers also warned that plastic debris could "facilitate species invasion and transport of contaminants including the COVID-19 virus."

Researchers used a model to evaluate the massive amount of plastic waste and its impact on the marine environment in the future. Within three to four years, the model suggests a significant portion of the ocean plastic debris is expected to make its way onto either beaches or the seabed, while a smaller portion will go into the open ocean.

The model suggests that by the end of this century, almost all of the pandemic-associated plastics will end up in either the seabed (28.8%) or beaches (70.5%), potentially hurting those ecosystems.

Reports of plastic waste harming wildlife have occurred throughout the pandemic. In late 2020, scientists in Brazil found a protective face mask inside the stomach of a dead penguin. In the Netherlands, a fish was found trapped in a medical glove, while birds were observed using medical face masks as nesting material — which were also found in Dutch canals.

Other research has found that plastics manufacturing is also currently a significant source of greenhouse gas emissions in the U.S. One report, published last month by Bennington College’s Beyond Plastics project, states that the U.S. plastics industry is responsible for at least 232 million tons of CO2 gas emissions per year — which is equivalent to the average emissions from 116 average-sized coal-fired power plants.

The findings come as world leaders have gathered in Glasgow, Scotland, for the U.N. climate summit, known as COP26. The two weeks of diplomatic negotiations by almost 200 countries have included pledges to curb greenhouse gas emissions through various ways — part of ongoing efforts to avert global warming.