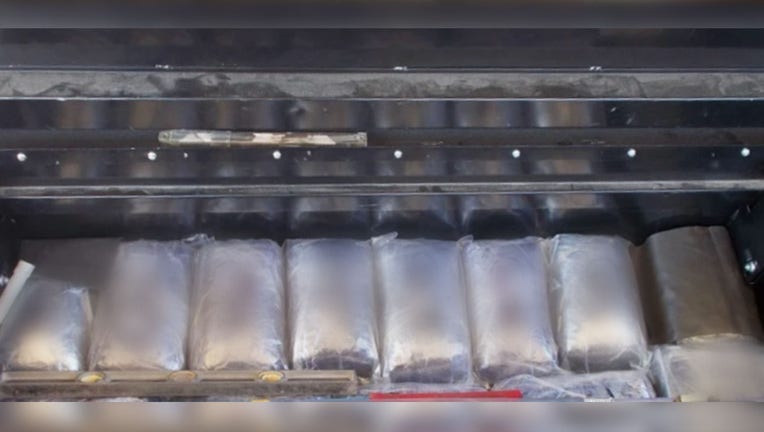 CBP officers discovered and extracted a total of94 packages of narcotics from underneath and insidemultiple toolboxes on the bed of the vehicle. (Image: CBP)

Hundreds of pounds of drugs were seized earlier this month at a port of entry in California, after U.S. Customs and Border Protection officers uncovered the stash in an unsuspecting item.

Over 400 lbs. of meth, cocaine and heroin were uncovered in toolboxes destined for the U.S.

The toolboxes were inside a 2006 Toyota Tundra driven by a 56-year-old man.

CBP said during the inspection, that a total of 94 packages of drugs were found underneath and inside multiple toolboxes that were in the bed of the vehicle.

The drugs were tested and found to be cocaine, methamphetamine and heroin with a combined weight of just over 415 lbs.

CBP said the drugs have an estimated street value of $2.56 million.

The drugs were seized on April 1 at the Tecate Port of Entry, which is near Tijuana and San Diego.

"This interception is a true testament to the diligence of our frontline CBP officers," said Rosa Hernandez, Port Director for the Otay Mesa Port of Entry. "Our officers continue to remain vigilant and prevent illicit narcotics from poisoning our local communities."